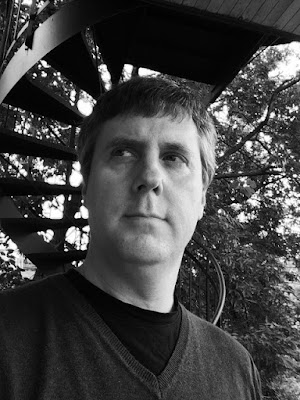 Derek Webster is the author of Mockingbird, shortlisted for the Gerald Lampert Award, and the founding editor of Maisonneuve magazine. His poetry and prose have appeared in Boston Review, BOMB, Partisan, The Malahat Review, The Walrus and elsewhere. He lives in Montreal, Quebec.

1 - How did your first book change your life? How does your most recent work compare to your previous? How does it feel different?
I think publishing Mockingbird (Véhicule Press, 2015) has allowed me to call myself a writer in a way I did not allow myself before. Even now, most people know me as an editor and are quite surprised when they hear that I write poetry. Surprise! Being a finalist for the Gerald Lampert Award was also gratifying, especially considering the book was not widely reviewed.

New work, old work—Mockingbird has both. I’m in my forties, and have been writing and revising poems for over 25 years by now. It was an immense relief to finally get older poems out the door. The new work in the book (i.e., written 2013-15) is sparer than the older stuff, less formal, and slightly less artificial. That’s the direction I’ve continued to go since then.

2 - How did you come to poetry first, as opposed to, say, fiction or non-fiction?
When I was starting out as a teenager, poetry was easier to get a prideful rush from than, say, the self-conscious slog of a story. I didn’t have to think about why I was writing a poem, I just wrote it and it was done—secret genius confirmed. Narcissistic meditations gave way to portentous abstract squibs linking my daily reality to classical myths like Jason and the Argonauts, Odysseus, etc. I read a fair amount of French poetry at Laval University (Rutebeuf, Ronsard, de la Martine, the Parnassians) before being impressed and frustrated at McGill by modernists like Yeats, Pound, Eliot and Frost. I was really into symbolism and allusion back then. When I finally started just describing my own experience in what felt like almost embarrassingly simple language—for example, a poem like “Lesson,” which appears in Mockingbird—the results were a lot more interesting, and got me into an excellent MFA program (Washington University in St. Louis). I’ve been trying to remember that lesson ever since.

3 - How long does it take to start any particular writing project? Does your writing initially come quickly, or is it a slow process? Do first drafts appear looking close to their final shape, or does your work come out of copious notes?
I guess I’ve created pieces that more or less wrote themselves (“Mistake”, “Identifying the Body”) as well as others that only started to resonate after considerable revision (“Pelicans,” “Calendar” “After the Break-Up”). I think I enjoy writing the most when momentum builds within a project and new poems force themselves forward. At those times I just get out of the way and let something write itself in that slightly irrational mental twilight many writers experience.

4 - Where does a poem or work of fiction usually begin for you? Are you an author of short pieces that end up combining into a larger project, or are you working on a "book" from the very beginning?
In the past, I worked mostly poem by poem. These days, I am working on a more conceptual manuscript called The Time Machine, which comes out of the H. G. Wells book and idea. It has an implicit plot, a central character and some central concerns that create a starting point which helps limit and concentrate things.

5 - Are public readings part of or counter to your creative process? Are you the sort of writer who enjoys doing readings?
I used to be afraid of giving readings. My poems sounded full of poetic clichés and weak language, and I lost confidence in my work for many years. I had not accepted the reality that the best way out of such aural dislike was to read one’s poems out loud, and to write the aural experience into the creative process. I do that now as much as possible. There’s more poetic energy accessible in one public reading than in ten silent writing sessions. I still feel a lot of nerves now, but a great poetry reading can embody important human qualities that are not a part of most media or public life today, qualities like dignity, calm observation, consolation, principled behavior, awareness of history, citizenship.

6 - Do you have any theoretical concerns behind your writing? What kinds of questions are you trying to answer with your work? What do you even think the current questions are?
I’ve read some philosophers over the years, thinkers like Emerson, Richard Rorty, Donald Davidson and Charles Taylor, and I used to want to write poems that were a poetic embodiment of philosophical ideas—Rorty’s pragmatism in particular—in the same way that Wallace Stevens’ “Anecdote of the Jar” embodies some of George Santayana’s ideas. In practice, however, I found that I couldn’t direct myself to do this very well—the exercise was too intellectual to make good poetry. Perhaps I needed someone to show me how, or just persevere more. But one thing I came out of that experience with was a sense that one does not necessarily get to choose what kind of poet you are, or the deeper questions that drive you to write.

7 – What do you see the current role of the writer being in larger culture? Does s/he even have one? What do you think the role of the writer should be?
One could go back to Shelley’s view of poets as non-security-council members of the UN, so to speak, but for me, the idea you’re raising comes mostly out of the 19th-20th century view of writers as public intellectuals. That role still exists but it’s not the domain of writers alone: it has broadened with the spread of higher education into the role of any engaged citizen. I’m passionate about aesthetics and history, and they seem to lead me these days toward consolation and empathy, and away from front line social politics. Maybe that course will change direction in the future.

Beyond the realms of literary publishing, there are cookbooks, political screeds, ghostwritten sports biographies, children’s picture books, survivor memoirs, how-to series, infotainment, crosswords, and a few hundred more categories and reasons for writing. It’s a monumental flood of activity that I don’t have an opinion about beyond observing that people write what they want and need to write, and talk about that writing, every day.

8 - Do you find the process of working with an outside editor difficult or essential (or both)?
When the advice is good and revisions improve the work, it’s an excellent thing. Readers give you credit for all the good lines even though you know your editor came up with half of them. That’s fine—everyone benefits from good advice. But when the advice is confusing, muddles your sense of your own work, reduces your confidence—well, that’s terrible.

9 - What is the best piece of advice you've heard (not necessarily given to you directly)?
I think it was Alice Munro who said “Do what you want and accept the consequences.” Freedom and responsibility expressed in a single sentence. Hard to beat that.

10 - How easy has it been for you to move between genres (poetry to fiction)? What do you see as the appeal?
Leaving poetry seemed easy. Going back to it was hard.

11 - What kind of writing routine do you tend to keep, or do you even have one? How does a typical day (for you) begin?
No typical routine. Kids.

12 - When your writing gets stalled, where do you turn or return for (for lack of a better word) inspiration?
I read. Nothing makes me want to write like good poetry. I also look at my own unfinished pieces, start out “revising” and end up writing something new.

13 - What fragrance reminds you of home?
Rotting seaweed reminds me of Oakville, where I grew up on Lake Ontario… the smell of boxwood reminds me of my maternal grandparents’ home in Virginia… and the malodorous sweetness of manure reminds me of Montreal, my home for the past 25 years, where the smell rises off the vast agricultural fields that paint the south shore.

14 - David W. McFadden once said that books come from books, but are there any other forms that influence your work, whether nature, music, science or visual art?
I’ve written individual poems that come out of and/or combine these sources, though I don’t have a special relationship with any particular source. Books and their authors are influential (e.g., “Emily Dickinson,” “Ted Hughes,” “Larkinesque”) but so are natural settings (“Florida,” “If the Great Gatsby Had Children”), relationships (“Like Rabbits”), childhood memories (“Angel Dust”), nursery rhymes (“Dwindle, Dwindle”) and bas reliefs (“Egyptian Archers”). I have found science a challenge to incorporate into poetry, perhaps because it’s already so abstract to begin with… but I like reading other poets who do manage it. Timothy Donnelly has written a long poem called “Hymn to Life” that starts as a massive catalogue of extinct animals and becomes something sublime and hard to describe by the end. Such feats are inspiring.

15 - What other writers or writings are important for your work, or simply your life outside of your work?
Frost, Larkin, Karen Solie. Mary Oliver. Steven Pinker. Phillip Roth. Shakespeare. Whenever I come back to Eliot these days, I am amazed all over again. Anne Carson. I feel a sentimental devotion to the Canadian poets of our past—FR Scott, AJM Smith, Birney, Bliss Carmen, Crawford, PK Page—mixed with a sad realization that they’re pretty limited as literary models. Michael Hofman (the poet, the critic) is brilliant, as are William Logan and Stephen Burt. For some reason I think about Lake Nora Arms by Michael Redhill about once a month. I love reading Raymond Carver and Richard Ford. George Orwell’s essays have a relentless, hard-nosed humanity that never loses its edge.

16 - What would you like to do that you haven't yet done?
Climb more mountains and write more books.

17 - If you could pick any other occupation to attempt, what would it be? Or, alternately, what do you think you would have ended up doing had you not been a writer?
If I wasn’t a writer, I think I would have liked to be a painter or song lyricist.

18 - What made you write, as opposed to doing something else?
Pain to do with personal emotional crises, relationships, depressions. Writing helps to solve or alleviate things. Plus, my father is a journalist and editor, so writing (and editing) was sort of in the blood, and carried a high value in my family.

20 - What are you currently working on?
As mentioned earlier, a manuscript called The Time Machine. It has a plush Victorian red-velvet armchair that moves back and forth through time but also through different forms, and it takes the (often unwilling) traveller to places he doesn’t want to go, mutates him into other sexes, other life forms. It’s as if the machine itself were a self-determining entity called Memory, trying to find ways to perpetuate itself. I don’t know where this project will lead, but I’m enjoying the process.