When I was a pianist I had two equal and opposite fears: becoming the best and failing to become the best. Most of those who tried to be the best failed. So I tried to be the second-best, and sometimes I succeeded. 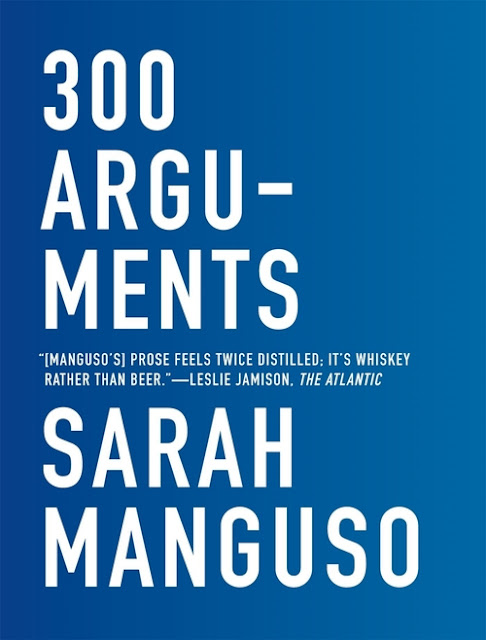 American writer Sarah Manguso’s latest non-fiction title is 300 Arguments (Minneapolis MN: Graywolf Press, 2017), a remarkable, intuitive, fearlessly open and revealing “sequence of aphorisms” from the author of such further non-fiction titles as Ongoingness: The End of a Diary (Graywolf Press, 2015) [see my review of such here], The Guardians: An Elegy (New York NY: Farrar, Straus and Giroux, 2012) [see my review of such here], The Two Kinds of Decay (Farrar, Straus and Giroux, 2008) [see my review of such here] and the short story collection Hard to Admit and Harder to Escape (McSweeney’s, 2007), as well as two collections of poetry. Manguso’s short self-contained pieces exist as pinpoints, accumulating a la Seurat into an intricate and almost unexpected portrait of the narrator/author. Her slivers are intimate, and occasionally dark, composed as aphorisms that work to explore or reveal, without lapsing into overly clever (as so many contemporary works labelled “aphorism” are). Every page includes at least one fragment that startles, triggering the response: “this is remarkable; I have to tell someone.” The beauty of reading and reviewing the work of Sarah Manguso is in seeing how her work exists as short bursts, written and rewritten as you read, writing turns and addendums, as though these are thoughts-in-progress; a book of thinking. These short explorations and realizations are heartbreakingly wise, incredibly deep and hard-won. We are fortunate to have them.

After I submitted the final draft of my book about a train-track suicide, the art department produced sketches for my book cover: a needle and a long skein of red thread; a length of fluffy pinkish lace; a yellow hand mirror lying on a patch of green grass. I gave my editor a note for the designers, and the next day they delivered a perfect cover design: a photograph of the book’s subject, a man sitting on a train. This was the note: Pretend this book was written by a man.