I wanted to
to get there

to get into
the words turned
as if on a lathe

of heaven sent
stutter fall
the way they
took the breath

right out of me (“2 for Robert Creeley”) 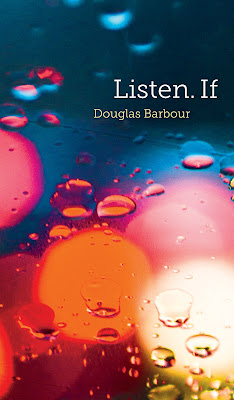 I’m thrilled to see a new title by Edmonton poet, editor and critic Douglas Barbour, his Listen. If (Edmonton AB: University of Alberta Press, 2017), a collection comprised of nine seemingly self-contained sections, four of which had previously appeared as chapbooks, via Greenboathouse Books, Rubicon Press and two from above/ground press (including one available online as a free pdf). While he has been part of two more volumes of an ongoing collaboration with American poet Sheila E. Murphy—Continuations (University of Alberta Press, 2006) and Continuations 2 (University of Alberta Press, 2012)—it really has been more than a decade and a half since the appearance of his previous poetry titles: Fragmenting Body etc. (Edmonton AB: NeWest Press, 2000) and Breath Takes (Toronto ON: Wolsak & Wynn, 2001). Even the aforementioned chapbooks are more than a few years old: a flame on the spanish stairs (Victoria BC: greenboathouse books, 2002), It’s over is it over: Love’s Fragmented Narrative (Ottawa ON: above/ground press, 2005), Wednesdays’ (above/ground press, 2008) and Recording Dates (Edmonton AB: Rubicon Press, 2012). Not that any of this is a specific complaint, but an observation: I’d been years wondering where and when new work by Barbour might appear, despite the knowledge that his two prior collections also held quite a book-silence before they appeared. Between breaths, one might say, a silence.

In Barbour’s latest, there are some elements familiar through much of his work, from meditations to memorials, his ongoing engagements with world politics, and lines and narrative-threads composed with breaks of breath in and among, such as the first half of the poem “Cézanne’s last years,” that writes:

There is a precision that Barbour writes out in each short breath-take, clipped and clear, even as the accumulation of those words and phrases come together to form a narrative both distinct and nebulous. Almost in counterpoint to the ongoing collaborative work he’s been doing with Sheila E. Murphy, collaging lines that collide or collude meaning, the poems here seem clearer, writing out a tablature of open skies, summer colours and fresh air around some of his more familiar concerns. As he writes to open the essay-poem “for Barbara Caruso (i.m.)”:

those colours
gone  now
into the dark

Posted by rob mclennan at 8:31 AM
Labels: Douglas Barbour, University of Alberta Press