Keegan Lester, this shouldn’t be beautiful but it was & it was all i had so i drew it

if comets raining overhead. if we turn into a museum for the living before
the big one hits. if language, an improbable opponent to gravity & stars,
came up with new names for gravity & stars, what force could trick a river
north, but the dreams of those who fear sleeping through this version of
the world. if against better judgement we went out at night, run like roman
candles against the wick of sky. if they find us in the riverbank. if our
hearts in our stomachs, a pile of stones, tell them to tie my shoes together.
tell them to throw them over a power line of rusty apricot; silkscreen t-
shirts with our likeness; tell them to inspire bedtime stories in the foreheads
of small children; tell my children to go out at night & sing. 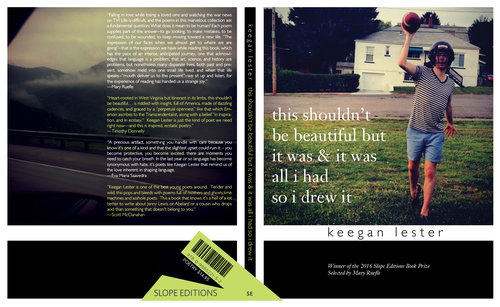 i don’t want to be saved
by my lover, my lover says to me

with her eyes closed
on a park bench,

& the al pastor is a little too chewy

& our stomachs turn u into less sexy versions of ourselves
in our heads, but we are old now anyways.

sexy is relative. we are like two thirteen-year-olds at a dance on opposite sides of the room,
waiting to make a move & our eyes meet during that country grammar song

& nelly’s syntax makes us believe
in what entire flocks of seagulls can be capable of,

miles from a beach.

every time a person takes a selfie,
a piece of them dies.