30 under 30 : an anthology of Canadian millennial poets, ed. a.m. kozak

This anthology is filled with poets across the country who have their own unique experiences but are united in the context of time and space. Some are award-winners and major award nominees. Others are recently starting to perform and publish. When soliciting poets for this collection, we wanted to include a range of voices from various pockets of the country with special attention to poets part of the ‘scene’: the ef-fervescent community that takes relentless dedication, energy and care to build. Though we are all different, what keeps us strong is our togetherness.

Here is a little window into some of these ‘millennial’ poets, resisting through words, if you’re curious enough to peek. The next time you overhear someone characterizing this generation as spoiled or disinterested, just think—where’s the evidence? (a.m. kozak, “Foreword”)

Welcome the sky inside of you. Hold me closer in the tiny rain, baby, I have been wondering about the time zones of waiting and the phenology of watering.

Waking up inside of my self isn’t always beautiful, but waking up beside you is beautiful all the time. The pattern we make together is crystalline. Baby, the compost in the biodegradable bag in the plastic bin is a symphony of decay, and flowers are sometimes spaceships.

Come rage, come uncertainty. Baby, brilliantly. Come, avoid the ambient watermelon. It is too heavy. Hold me in the gentle rain with certainty. Hold this time zone of waiting.

Together we make a watering mouth. Together we wonder about the pattern between mountains and the smallest crystals. I am gigantic for you. I am a tiny spaceship. I am waking up beside you in certainty, baby.

I am wandering between the time zones of our longing. I have been a watermelon seed. I have wilted. I have decayed, for you, baby. I am new. I have been waking up as beautiful as wondering.

Love is the space between mountains that holds distance together. Love is a watermelon smashed on the sidewalk. I have been waking up as open as the sky for you, baby. I am all guts and seeds and rain. (Ashley Opheim) 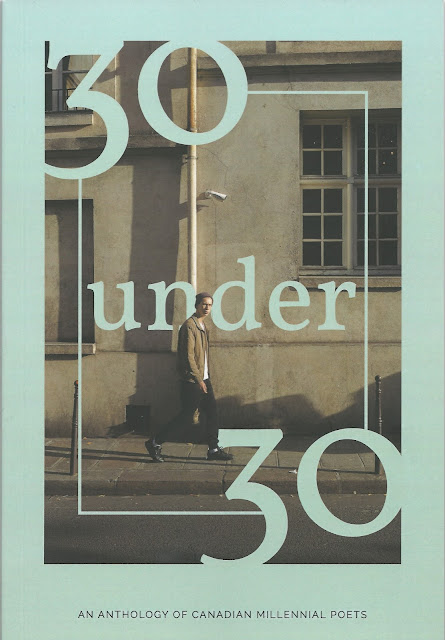 There are a number of poets in this anthology whose work I’ve been excited about for some time—including Bebenek, Czaga, du Plessis, Farley, Hargreaves, Johnson, Ladouceur and Yang—including a couple I didn’t realize were still not yet thirty years old. Others in the anthology are new to my attention, and I’d been curious to see who In/Words might have selected (on first glance, Ottawa poet Sarah MacDonnell becomes a curious omission, especially given In/Words recently produced her debut chapbook).

Pushing the point of age, the book is sectioned by birth year, opening with “b. 1987,” a structure about as arbitrary as any (including alphabetical), but is intriguing in that this is something I’ve not seen anthology do before. Does age matter? I like that, here, it both does and doesn’t. Still, part of the limitations of such an anthology become clear pretty quickly; in the introduction, kozak references an idea of resistance, a social and political awareness, that his generation has embraced, yet the work in the anthology doesn’t really show much evidence of overt resistance, including those working within radical forms as part of their their resistance (as many older-than-thirty Canadian poets have been doing for some time: Stephen Collis, Christine Leclerc, Sonnet L’Abbé, Cecily Nicholson, Aisha Sasha John, Donato Mancini, Liz Howard, derek beaulieu, Brecken Hancock, George Elliott Clarke, Jordan Abel, Colin Smith, etcetera). As part of this, one notices through the author biographies that, once the list of contributors move beyond the Toronto-Ottawa-Montreal range, they predominantly seem to be poets with contributor’s notes that include Arc Poetry Magazine and/or PRISM International. While this isn’t meant as a complaint against the anthology or the work of the editor, it does seem a limitation of structure and style in the collection. Were there no poets under thirty from Calgary, for example, working more radical forms? Or Vancouver, doing the same?

we’ll dock the boat after late night skinny
dips and scar our legs, pummel lichen,
slip and fall into animal burrows, mark
our palms with pine needles, weeds paddle
blisters and beer bc up north it’s only
you me the ghosts and trees and
your white picket family, who’ll insist I
come back soon, indulge me with hot dogs
those red skins cracking all the towels and
all the books somehow I got through war
and peace without remembering a thing
and your brother will drive us back
through la ronge and we’ll see two native
boys running through the rain fists clenched
around garbage bags full of clothes brown
bra spilling not even November yet but one
of them made rouge lips out of a poppy
red velvet smeared across window
cocking his head to see what chased him
past the mud the rain and dirt the weight
of the crucifix hanging around his neck
your brother cackling to a halt gravel
road upturned pilfering folds of black
plastic frills of a dress peeking out
we were all laughing at those nobodies
driving out the city past tombstones
those gray tongues wagging at trucks
trampling infants clothing, we’ll
tell the story of them holding a funeral
wreath, those pebbles slicing cheeks
that rain and them crying and screaming
and arguing to get the dresses back
in the bag, we’ll get a postcard of
this ghost town for all the world
to see before forest fires torched
it all in 2015 that was a good time
to be alive, nemeiben road on fire
two townies hoodwinked by such
a nice family, pine needles burning
footprints of our interruption sinking
but who cares because who knows
about their history, and how little
we knew of everything. (Chuqiao Yang)

What also becomes curious is the fact, even, that another publisher or editor hadn’t already taken such a project on, providing a really interesting opportunity for In/Words; my generation, for example, had a pretty good amount of coverage (slanted towards more formally conservative work, obviously) through Patrick Lane and Lorna Crozier’s two anthologies of “best” new poets under thirty—Breathing Fire (Harbour Publishing, 1996) and Breathing Fire 2 (Harbour Publishing, 2004)—prompting Jon Paul Fiorentino’s chapbook anthology-in-response, Pissing Ice: An Anthology of “New” Canadian Poets (BookThug, 2004). Such projects are healthy for the sake of a living and ever-expanding literary culture, although I do wonder about some exclusions, which are, of course, difficult to really explore without knowing how old certain authors actually are. How old is Calgary poet Kyle Flemmer, for example, or Toronto poets Emily Iszak or Eric Shmaltz? What of Emily Ursuliak? Who else might they have missed? But still: the argument of exclusions become rather arbitrary when one considers the potential scope of their project: even the first Breathing Fire anthology took months of submissions to put itself together, and the final product was considered woefully slanted and incomplete (again, due in part to the lack of more experimental and radical forms of writing).

All in all, the work presented in the collection is intriguing, if a bit uneven; even poets I had been excited to read had poetry included that I know doesn’t represent their finest work. The wisdom and saving grace of 30 under 30 is their lack of declaration of arbitrary and impossible “best,” but instead, a showcasing of thirty Canadian poets under thirty that are simply worth paying attention to: in that, I completely agree.

Congrats Aaron Kozak and rob mclennan on this one. Looking forward to reading this big fat book. Any word on doing a swing down towards Southern Ontario to promote the anthology?

Nothing planned for southern Ontario, which isn't to say I wouldn't be interested in going there if an opportunity arose. Books can be ordered via our website or by emailing inwordsmagazine@gmail.com, though!