It is good to see the release of Ottawa poet Michael Dennis' long-awaited Bad Engine: New and Selected Poems, “edited and introduced by Stuart Ross” (Vancouver BC: Anvil Press, 2017). Given I was the editor of Dennis’ only other volume of selected poems, This Day Full of Promise: Poems Selected and New (Fredericton NB: Broken Jaw Press/cauldron books, 2003), I’d been intrigued to see what directions Ross might head into for this new volume. Apart from the immediate difference of Ross conducting line edits on the poems (something Dennis hadn’t allowed before), Ross was also given access to a wide variety of unpublished and uncollected work, opening up the possibilities enormously for a volume of work by a poet far more productive than even his multiple book and chapbook titles over the past four decades might suggest. As Ross writes in his introduction to the collection: “And so Bad Engine offers up revised versions of just about all the selected poems, as well as a big complement of recent works. The couple thousand poems I read to concoct this mixture drove home to me that Michael Dennis is the real thing when it comes to poetry without artifice: poetry delivered directly from the various organs of the gut.” Earlier on, he offers a perspective of Dennis’ overall work:

What is the greatest appeal in Michael’s work? I’d say it is his conviction, his directness. And as brave and no-bullshit as he usually is, he’s the first to admit to his own fuck-ups. Here is one of us: a human, but telling it like it is – like it is for him.
Michael belongs to a tradition of poets who do exactly these things, in their different ways: Charles Bukowski, of course, and Lyn Lifshin; Milton Acorn, Tom Wayman and Al Purdy; Eileen Myles and Sharon Olds. To me, a surrealist/absurdist, it’s a precarious path to walk, because, well, it’s so raw. But that also means that to successfully pull off such a poem is a pretty mean feat.
When we embarked on this volume of selected and new poems, at various times I nudged Michael to take a dip into surrealism, or experimentalism; I gave him assignments to get him to get him to produce cut-ups. I could tell his heart wasn’t in it, though, and why would it be? For him, perhaps there is enough surrealism, absurdism, and disjunctiveness in real life. Besides, Michael has experimented: there are some visual poems in his early books, but it clearly wasn’t a route he was interested in following. 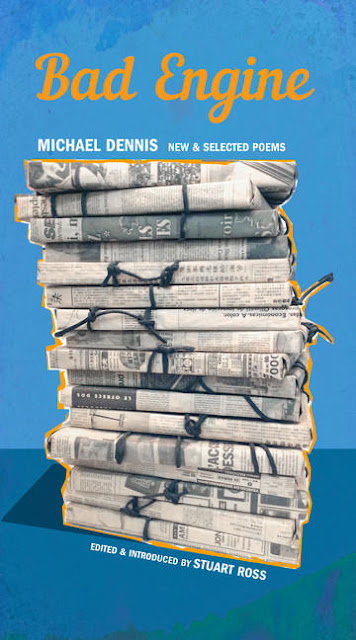 Ross as an editor has been interesting over the past decade or so, editing volumes for Mansfield Press and now Anvil, and has been responsible in many ways for a revitalization for a number of poets’ careers that had otherwise fallen by the wayside (for a variety of reasons), most notably David W. McFadden, who went on to win the Griffin Poetry Prize (I would argue Jay MillAr has done much the same revitalization for numerous other poets through BookThug, such as for Phil Hall and Victor Coleman). Opening with some two dozen pages of new material, Bad Engine provides less of a linear trajectory to Dennis’ forty-plus years of poetry production than an exploration into a short list of concerns that have occupied his writing throughout the years, from more personal poems on and around various members of his family, commentary on his current reading and poems that write out the immediacy of his day-to-day, from doing dishes to sitting in pubs to reading the newspaper. One ould say that Michael Dennis is a no-nonsense and straightforward poet of plainspeak and the immediate, and there is something curious about how not a single piece in this collection feels dated, irregardless of date of composition. His view may have gained depth, wisdom and widened his scope over the intervening years, but Michael Dennis is a poet who has cared about what is immediately in front of him, right now, for a very long time now. Here’s hoping his perspective continues.

Dexter Gordon
Charlie Parker
all those cats
they wore them

but
hell if I don’t like
tipping my hat