I regard this poem, this article online, this music video
from the sidelines of my eyes, an unconscious kind

instead of in a straight line down the throat. It’s strange
how the fundamental procedure of naming

insinuates itself into literature w the necessity to title.
Poem titles are harder than book titles for the direct

engagement with a smaller amount of text.
Obvious/what’s the connection/strong/descriptive

is a title without marital status. Assignation affixed
to the cover points to the book’s number one verse,

what happens under the covers, this poem is sir,
dr. missus ma’am, but mostly none of the above. (Klara du Plessis)

After going through the third issue of the semi-annual Canthius: feminism and literary arts (winter 2017), edited by Claire Farley and Cira Nickel [see my interview with Claire Farley on Canthius at Queen Mob’s Teahouse], I think that this might be their strongest issue to-date, featuring new writing by Amanda Earl, Doyali Islam, Ariel Dawn, Lisa Richter, Nicole Brewer, Klara du Plessis, Hoa Nguyen, Laura Ritland, Vivian Zenari and Nancy Lee, with artwork by Tafui, as well as a short interview with the artist on her work. Given their journal tag-line, “feminism and literary arts,” the editors have set themselves an ambitious goal for wide-ranging study, and it has been interesting to watch how the journal showcases their explorations into and furthering of feminism through something as straightforward and potentially complicated as producing a semi-annual poetry journal. As Farley and Nickel write in their “A letter from the editors”:

For us, the difference between capitalism and community, between products and ideas. Feminism is about pay equity, access to affordable childcare, improving transgender health care, showing solidarity with all systematically marginalized groups. But it’s also about ideas. In the saturated publishing market, how can we treat women’s ideas with dignity and not as products? The difference between so-called political feminism and marketplace feminism seems to mirror that between communal goals and individual success. A handful of successful women and trans writers doesn’t itself make gender equity. Spaces where a broad range of ideas and expressions are valued and celebrated just might though. Feminist attitudes in this issue treat poetry’s capacity to engage the always-already political. Hoa Nguyen’s work, for example, often treats domestic and political space as one and the same. Amanda Earl’s poem address city planning and the legacy of Jane Jacobs by questioning the very coherence of subjectivity in place. Klara du Plessis dissects categorization by asking, “how the fundamental procedure of naming / insinuates itself into literature w the necessity title.” In shifting our gaze from consumer choice to aesthetic inquiry, how can our ideas give shape to meaningful exchange? 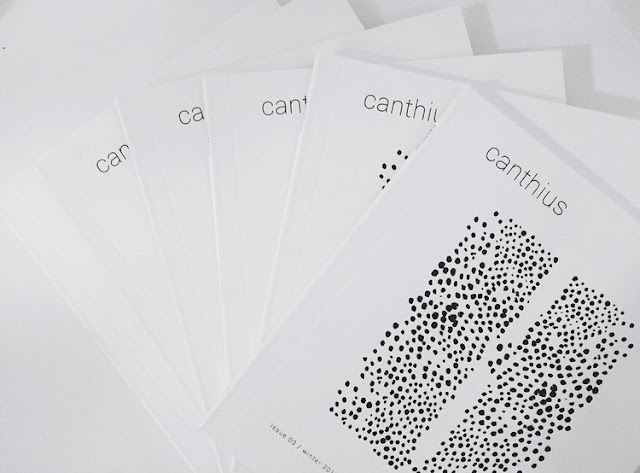 Part of the strength of Canthius is its attentiveness to both the formal lyric and the experimental, and all spaces around and in-between, side-stepping any sense of aesthetic-as-limitation. Canthius is a journal open to content, conversation and collusion, seeking out what might not have been considered, otherwise. There really is some amazing work in this issue, from Amanda Earl’s city-poems, “Grace,” to Klara du Plessis sharp and precise lyric narratives and Doyali Islam’s powerful asides to Nicole Brewer’s expansive staccato-lyric “It Started With the Socks” (perhaps the first I’ve seen of her work, actually). Toronto poet Hoa Nguyen’s work, obviously, is simply magical for its lyric flow and focus on smallness, writing “A place of purple of / Lip balm / Empty breath spray [.]” As well, I’m intrigued by the introduction to work by Ariel Dawn, poetry by fiction writer Nancy Lee and even Brewer, whom I’ve been aware of for some time but hadn’t yet seen the work of. There is an awful lot here to take in, and wonderfully so.

For awhile my love and I live in the valley, basement with the old bed, wardrobe, lace drapes. We wander the white meadows. Barbed wire stretches forest to farm. Near the ditch something wheeled and wooden: a boy told my parents what happened there and then no one believed it, not even the boy. In the valley of lilies. They caught me playing under a pillow; denying it, I was forced to walk the room with my undone zipper. In the valley of secrets, Mother sculpted a dead lover: meticulous bone, muscle, curve of torso. Father hid magazines in his files. Once, in the sea chest, he found my diary. Burned, he said, then pretended he said nothing. Between the hedgerows and the garden a graveyard for cats. My cat died the day I had a medical procedure (what they call it there). Where it is darkest there is a hole in barbed wire. In the forest a car with white flowers around the wings. We sit inside and kiss. It snows. Deep in the valley. The snow spirals and whirls, so the world is raised, it is erased, a postcard, a landscape; this way we live. (Ariel Dawn)