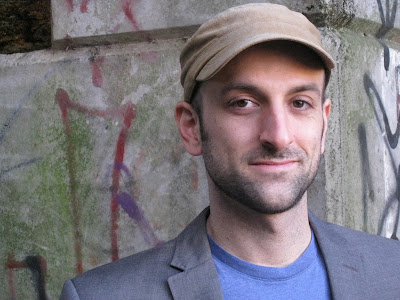 Dan Rosenberg is the author of The Crushing Organ (Dream Horse Press, 2012), which won the American Poetry Journal Book Prize, and cadabra (Carnegie Mellon University Press, 2015). He has also written two chapbooks, A Thread of Hands (Tilt Press, 2010) and Thigh's Hollow (Omnidawn, 2015), which won the Omnidawn Poetry Chapbook Contest. Rosenberg earned an M.F.A. from the Iowa Writers' Workshop and a Ph.D. from The University of Georgia. He teaches literature and creative writing at Wells College and co-edits Transom. His website is danrosenberg.us.

1 - How did your first book or chapbook change your life? How does your most recent work compare to your previous? How does it feel different?
When my first book was published, everywhere was a homecoming. I went on a tour with Adam Watkins, whose book came out at the same time from the same press. We reached out to friends who connected us with other people who hosted readings. Adam Clay, who was a total stranger when we were rolling through his corner of Kentucky, invited us to stay with him. And he promoted our reading. And when he found out we weren't savvy enough to have a Square reader, he gave us his. My book was my excuse to go out into the poetry world and meet people like him, people whose immediate kindnesses meant the world to me.

If that first book was a kind of homecoming, this new chapbook, Thigh’s Hollow, is an invitation into my home – into my brains and guts.

2 - How did you come to poetry first, as opposed to, say, fiction or non-fiction?
Poetry came to me first, when I was a kid, because it allowed me to process things (my parents’ divorce, etc.) in utterly transparent code: A kangaroo finding a stable family to live with. It allowed me to feel clever, and I liked feeling clever. It took me a long time to stop enjoying poems that are merely clever – and even longer to stop trying to be clever myself. But I’ve never felt the impulse to write anything but poetry.

3 - How long does it take to start any particular writing project? Does your writing initially come quickly, or is it a slow process? Do first drafts appear looking close to their final shape, or does your work come out of copious notes?
I write quickly then gestate forever. I also tend to have multiple projects going at the same time – I write into each as I’m able. As for revision, mostly the shape of the poem is there by the time the first draft is complete. (I edit a lot as I go.) Some poems never look right, and I tinker and tinker until I realize those poems are never going to be any good, but the tinkering was the poem.

4 - Where does a poem usually begin for you? Are you an author of short pieces that end up combining into a larger project, or are you working on a "book" from the very beginning?
Each poem begins on its own, as a scene or scrap of language or rhythm in my brain, but I can tell very quickly if it’s going in the book-length-project pile or the random-assortment-of-poems pile. I haven’t figured out how to write explicitly to flesh out a book, mostly because I don’t want to. Which might be the better answer to your question about writing poetry over prose.

5 - Are public readings part of or counter to your creative process? Are you the sort of writer who enjoys doing readings?
I enjoy giving readings, but I’m acutely aware of how difficult it can be to hold onto a poem you’ve only heard read once. I tend to talk a fair amount around the poems, to provide what context I can, so I don’t lose everyone immediately. And then I feel anxious about having too much banter and distracting from the poems.

6 - Do you have any theoretical concerns behind your writing? What kinds of questions are you trying to answer with your work? What do you even think the current questions are?
I think the real current questions can’t be the ones we’re having conversations about now. The surrealists thought they were communists until the communist party came along and asked them to play nice. And on this side of the Atlantic, Dalí went and designed storefronts on 5th Avenue – and surrealism was digested in the great belly of American advertising, contrary to everything the other surrealists thought they were up to. All that time they were still talking about their revolution. We’ll know what today’s questions are tomorrow.

7 – What do you see the current role of the writer being in larger culture? Does s/he even have one? What do you think the role of the writer should be?
I can’t speak for other writers, but for me, teaching is where I see my role as a writer most impacting the larger culture. My students grapple with poems that ask them to think, to feel, to listen more attentively than they do at any other point in their daily lives. Today my wife was on line at the DMV and everyone around her was talking about how excited they are to vote for Donald Trump. I think that’s a failure of our education system to promote attentiveness and thoughtfulness and empathy. I think poetry, well taught, can help fix it.

8 - Do you find the process of working with an outside editor difficult or essential (or both)?
Working with Omnidawn has been a dream! They have been collaborative, responsive, engaged – everything I could have asked for.

Most magazine editors don’t do much editing anymore, but some do – and I’m always grateful to get notes back on poems, to hear suggestions on how to make them better. Most recently, the Beloit Poetry Journal had a handful of comments on a poem they took. Some were great, and others I disagreed with. I have a thick enough skin that the process seemed benign at worst, helpful at best.

9 - What is the best piece of advice you've heard (not necessarily given to you directly)?
“When the cat is sleeping, don’t try to lie down on him.” My son is a very active toddler.

10 - How easy has it been for you to move between genres (poetry to translation)? What do you see as the appeal?
They recharge each other. My translation work is collaborative, so it’s an entirely different thing. If Boris were sitting beside me while I was trying to write my own poems, I’d freak out. But translation involves so much more puzzling out, so much more problem solving, and doing it together activates other parts of my brain.

11 - What kind of writing routine do you tend to keep, or do you even have one? How does a typical day (for you) begin?
A typical day begins with a very small man shouting “HI!” right in my face and then laughing like a maniac. I’ve lost all writing routine in the aftermath of our son being born, but my wife and I take turns giving each other space and time to write. And to do the jobs we get paid for. So, the time comes irregularly, but it comes, and I’ve found my process shifting as a result.

The poems I’m working on now are in the Thigh’s Hollow form and voice – they’re more modular, easier to leave and come back to, and far more consistent in tone than my first two books, and that’s a direct result of my routine changing. Living in that one voice, poetically, has allowed me to pop into that world, write a bit, and pop back out, whereas before our son was born I could take an entire afternoon just sitting and staring off into space and call it working.

12 - When your writing gets stalled, where do you turn or return for (for lack of a better word) inspiration?
I have a roster of great poets who I can always count on, Tomaž Šalamun foremost. Like many of us, his death last year hit me hard; he was one of those people who always seemed too alive to ever die.

But teaching also really energizes me: I read new work and reread old favorites with my students constantly, and that can usually kick me back in gear.

13 - What fragrance reminds you of home?
I’ve had too many homes to answer this question.

14 - David W. McFadden once said that books come from books, but are there any other forms that influence your work, whether nature, music, science or visual art?
People, more than anything else, really. I’ve found my daily life creeping more and more into my poems, and I’m happy to see it there.

15 - What other writers or writings are important for your work, or simply your life outside of your work?
Benjamin’s “The Task of the Translator” and Derrida’s “Des tours de Babel” both keep surprising me every time I read them. I also don’t know how I would get through a week, or a round of doing the dishes, without some of my favorite podcasts: My Brother, My Brother, and Me; Pop Culture Happy Hour, The Adventure Zone, International Waters, Stuff You Should Know … I spend a lot of time listening to people being funny and/or smart while I’m being neither.

16 - What would you like to do that you haven't yet done?
I’m very excited to meet the man my son will become.

17 - If you could pick any other occupation to attempt, what would it be? Or, alternately, what do you think you would have ended up doing had you not been a writer?
I like the idea that “writer” is my occupation. My employer is Wells College, and sure, they want me to write, but my primary occupation is to teach, and I’ve always known that’s what I wanted to do. There was a period of time when I was studying philosophy very intently, and I could have easily gone down that graduate school path too – which means I’ve never really considered a path that looked too different from the one I’m on now.

18 - What made you write, as opposed to doing something else?
Once I was done with college, I was interested to see what I would do. I’d never had the kind of freedom that a 9-5 job offers, in terms of not having to think about anything in particular from 5:01 to 8:59. Turns out, what I did in that free time was read and write poems. I can’t tell you why because I’ve never felt the need to interrogate that. I’m just grateful to have that impulse in my life.

19 - What was the last great book you read? What was the last great film?
I’ve just been rereading Donald Barthelme’s Sixty Stories, because I’ll be teaching it in the spring. The book leaves me speechless, which is great, but I have no idea what I’m going to say to my students about it. As for film, I’m going to throw out a BBC show: Foyle’s War. It’s on Netflix. I love it.

20 - What are you currently working on?
I’m writing into the project that Thigh’s Hollow is a part of. The larger collection is called Esau, and the poems I’m working on now are far more personal, far more intimate. I suppose I’m working on letting myself back into my poems.