Tonight I pay attention
to my energetic state.

I turn on the fire
until my eyes adjust,

expand to let a path
scorch through all

of me. All of me
dying in fake light.

I know about steering
toward forfeit.

Each time I crack
I touch the gap between

my lungs. I reach
inside my brain,

malleable as it is,
and spend a century

slicing its dimensions
until it becomes

a map I can trust. 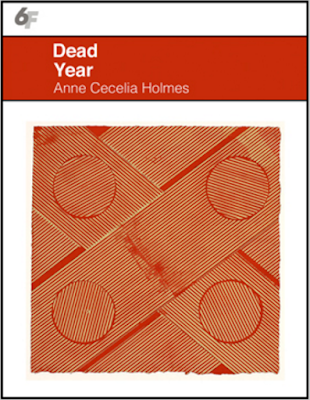 The author of The Jitters (horse less press, 2015) [see my review of such here] and the chapbooks Junk Parade (dancing girl press, 2012) and I Am A Natural Wonder (with Lily Ladewig; Blue Hour Press, 2011), Western Massachusetts poet Anne Cecelia Holmes’ newest poetry book is Dead Year (sixth finch books, 2016). Dead Year is made up of a suite of twenty-eight short lyrics, each of which utilize the same title, claiming (and re-claiming) a safe physical and temporal space. As she writes in the opening poem: “I unfold old terror / until it is a landmark. // Anything wanting / to be born this year // needs more than / an inarticulate feeling.” The poems in Dead Year are powerful in their subtlety, openness and even optimism, with only the thinnest verneer between the surface of the page and an immeasurable depth of rage and grief. On her website, as part of her announcement for the new book, she offered: “These poems are dispatches from abuse and violence and looking for shelter, apologies to unneeded apologies.” In many ways, these poems do feel like epistolary dispatches, little notes composed, not as a cry for help, but for an acknowledgment of what has happened, what is happening, and what comes next, attempting to emerge, rebuilt, on the other end of trauma. The poems in Dead Year are very much an acknowledgment, giving voice to what had not yet been spoken of. To give voice is to make tangible, but it is also allowing the potential for exorcism. As she writes towards the end of the collection: “I reach / inside my brain, // malleable as it is, / and spend a century // slicing its dimensions / until it becomes // a map I can trust.” In her December 15, 2015 “12 or 20 questions” interview, Holmes spoke a bit about the process of working on the manuscript:

Over the past two years or so, the voice and intent behind my poems have shifted pretty forcefully to a more bodied, female perspective. Like I mentioned before, for a long time I was uncomfortable facing depression, anxiety, trauma, especially related to a personal and societal female experience in my work, even though these ideas and concerns were boiling in me. To that end, I am writing poems investigating how to reconcile these issues—how to be okay with anger, but also working toward hope. Hope is important to me, no matter how sick the world seems or how foolish it feels to still seek it. There are theoretical questions behind this, of course, but it is also impossible for me to separate the theoretical from the personal.