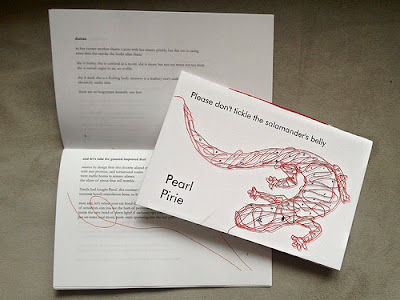 Is it spring yet? I can barely tell, awaiting the new baby. Has it happened? I have no idea. What is sleep?

Don’t forget the ottawa small press book fair! It might not be happening until June, but if you write it on your calendars now, it gives you more than enough time to make something for it. And did you see I'm offering a series of very limited edition titles from above/ground press' mound of out-of-print backlist?

Montreal QC: I’m slightly frustrated at Vallum magazine and their wide array of chapbooks, nearly all of which I didn’t even know existed until recently, when I saw Don McKay read in Edmonton [see my report on such here] as part of the University of Alberta writers-in-residence anniversary with chapbook in hand, his Larix (2015). Did you know that the Vallum Chapbook Series is nearly twenty titles strong, with chapbooks by such as Fanny Howe, Jan Zwicky, George Elliott Clarke, Nicole Brossard, Mary di Michele, Sandy Pool and Blair Prentice, Eleni Zisimatos and Jason Camlot? I knew of a couple of the earlier titles, but I certainly didn’t know about their larger, rather impressive list.

Let’s pause and listen for what’s happening
underground, with the roots, the rhizomes, and
their close associates, the fungi and the worms.
So much mycorrhizal promiscuity and death, such
heavy sinking and sucking among the microbes,
so little regard for personal identity and
human rights, such continuous French kissing,
the birch and the Russala muchroom, the boletes
and the larch, the Pink Lady’s Slippers and their special
fungal friends, all those hyphae busy
hyphenating, corpse-compost, rot-root, the great
Ur-symbiosis that is soil, the ecstatic, indecent,
death-dissolving dance that will one day
gather us up.

Given his prior publication was his seven hundred-plus page Angular Unconformity: Collected Poems 1970-2014 (Fredericton NB: Goose Lane Editions, 2014), it is good to see new work by McKay in such a small offering, one of his rare forays into small press chapbook publishing (there have been a few, including from Olive and a couple of other places, but not many). Larix, named for the tree genus that includes the larch, focuses its meditative lyrics on wood landscapes (with the occasional bird, as always, thrown in for good measure), shifting slightly from McKay’s prior geologic threads. McKay, as always, utilizes his thinking lyrics as a way of discovering, of “getting there.” As he writes in the poem “To Speak of Paths (2)”: “Which way is the way? A question / to be pondered and if possible / outwalked.”

Ottawa ON: The recent crew at In/Words have been producing like mad lately, including a new chapbook by Ottawa poet Pearl Pirie, her Please don’t tickle the salamander’s belly (2015). I’ve long been an admirer of Pirie’s lines, the meandering questions she moves through in a kind of collage-manner of thought and phrase, stitching together the most curious of through-lines in what otherwise might be seen as a concordance of semi-randomness. The mind seeks out patterns, and Pirie manages that tension in a most unusual way, similar to work by Perth, Ontario poet Phil Hall for its curious turns, language-play and meditative stretches.

our eyes have opened

for this we sing you our peeps, electric mother:
the fence of your heat saves us from deep winter.
electric father, we are hungry in our pin-feathers.
your blender song comforts, regurgitate us fruit.
electric mother, we cowbirds are still flightless.
oven-divine pre-digest our grain, and feed us.
we have no egg-teeth, flood us another valley,
build another coal plant for we have great need.