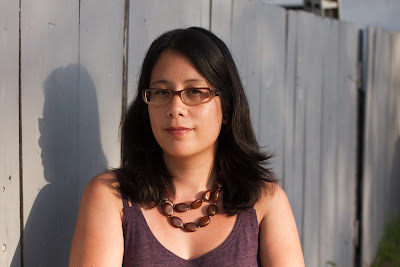 Teri Vlassopoulos is the author of the short story collection, Bats or Swallows (2010), and a novel, Escape Plans (2015), both with Invisible Publishing. Her fiction has appeared in Room Magazine, Joyland, Little Fiction, and various other North American journals. She is the cookbook columnist for Bookslut, and has had non-fiction published at The Toast, The Millions and The Rumpus. She can be found at http://bibliographic.net or @terki. She lives in Toronto.

1 - How did your first book change your life? How does your most recent work compare to your previous? How does it feel different?
My first book, a collection of short stories called Bats or Swallows, didn’t so much change my life as it did assuage a low grade panic that I would never publish anything. Ever. So, the book helped me relax and taught me that publication isn’t necessarily the end goal. Despite this lesson, a similar existential panic crept up on me anyway while I waited for my second book, a novel called Escape Plans, to get published. It was a little less existential panicky than the first time around, though.

2 - How did you come to fiction first, as opposed to, say, poetry or non-fiction?
I started off making personal and music zines as a teenager and in my early twenties, but the writing was closer to poetry and fiction than non-fiction. I realized I could address the issues I wanted to work through better in fiction, though, and eventually ended up there.

3 - How long does it take to start any particular writing project? Does your writing initially come quickly, or is it a slow process? Do first drafts appear looking close to their final shape, or does your work come out of copious notes?
The spark of an idea and the initial writing come quickly, but the journey to the final product is slow and circuitous. I end up on the scenic route no matter how much advanced planning I do. There are many drafts, many notes.

4 - Where does a work of fiction usually begin for you? Are you an author of short pieces that end up combining into a larger project, or are you working on a "book" from the very beginning?
Escape Plans began as short pieces that I glued together into something longer, but then realized the seams were too obvious and had to start all over. It was tedious, and I don’t want to go through the same process again for my next book, but maybe that’s just how I work. Damn it.

5 - Are public readings part of or counter to your creative process? Are you the sort of writer who enjoys doing readings?
I hate reading my writing out loud, and am jealous of writers who enjoy doing readings. That being said, I’ve had fun at pretty much every reading I’ve ever done and always leave thinking I should do more. That feeling quickly fades, apparently, because my first instinct when it comes to readings is, “noooo.”

8 - Do you find the process of working with an outside editor difficult or essential (or both)?
Essential! My editors at Invisible Publishing have given me fundamental insight into my work; I’m so grateful.

9 - What is the best piece of advice you've heard (not necessarily given to you directly)?
Grace to be born and live as variously as possible, which is from Frank O’Hara’s poem “In Memory of my Feelings” and is also the epitaph on his gravestone. I would like to apply this to writing, life.

10 - How easy has it been for you to move between genres (short stories to the novel to non-fiction)? What do you see as the appeal?
I don’t think about it much; the subject dictates the genre. Sometimes I can only address an issue in a personal essay, sometimes in a novel or short story. My secret is that I want to be able to throw poetry in the mix, but… I’m not quite there yet.

11 - What kind of writing routine do you tend to keep, or do you even have one? How does a typical day (for you) begin?
I’m currently, shakily, trying to establish a writing routine. After a year of maternity leave, I’m now back to working a fairly demanding day job, while also raising a wonderful and energetic toddler with my husband. These days, a typical day does not include any writing other than maybe thinking about it while I drive to work. I welcome advice.

12 - When your writing gets stalled, where do you turn or return for (for lack of a better word) inspiration?
A handful of writers who’s names are all weirdly similar: Laurie Colwin, Lorrie Moore, Lisa Moore. Also, Geoff Dyer, Marilynne Robinson, Miriam Toews. Also, recently, Elena Ferrante, Heidi Julavits.

13 - What fragrance reminds you of home?
These days, Johnson’s baby lotion, the kind in the pink bottle.

14 - David W. McFadden once said that books come from books, but are there any other forms that influence your work, whether nature, music, science or visual art?
My books most definitely also come from music, photographs, the view from a car window on a roadtrip, the feeling of seeing a painting in an art gallery, the feeling of sitting in a doctor’s office waiting room, the feeling of wading into the sea.

15 - What other writers or writings are important for your work, or simply your life outside of your work?
See question 12!

16 - What would you like to do that you haven't yet done?
Where do we even start…

17 - If you could pick any other occupation to attempt, what would it be? Or, alternately, what do you think you would have ended up doing had you not been a writer?
My day job is already pretty much the complete opposite of a writer: an accountant. It pays better than royalties. It would be nice to be just a writer, though.

18 - What made you write, as opposed to doing something else?
I had no choice in the matter! It’s just what I do.

19 - What was the last great book you read? What was the last great film?
Aforementioned wonderful and energetic toddler means it’s been awhile since I’ve seen a great film (which is also an excuse for the fact that I’m just not a big movie person). But books, there are always great books. Sharon Olds’ first collection of poetry, Satan Says. Shirley Jackson’s The Haunting of Hill House. Barbara Comyns’s Our Spoons Came from Woolworths. Stories from Grace Paley’s The Little Disturbances of Man.

20 - What are you currently working on?
A novel! Ugh! I also write these TinyLetters every two weeks or so:  http://tinyletter.com/teri_vlass