if the bridge
is a pillar of salt
the flag is a gun
made of doves
lenticular print
observing the crowd
so if we become
another lenticular
that moves between
watching and singing
together we’ll make
a geometry
we can all
agree on
it will stand
like a table
each leg carrying
its own weight:
one threat
one ideal
one pillar of salt

Minneapolis poet Mary Austin Speaker’s second full-length poetry collection is The Bridge (Bristol UK: Shearsman Books, 2016), an accumulation of untitled, stand-alone poems composed as she made her daily commute across New York’s Manhattan Bridge (a selection appeared as a chapbook of the same name through Push Press in 2011). In her 2013 “12 or 20 questions” interview, she describes the composition process of the collection:

I wrote another book in one fell swoop—The Bridge chapbook is part of a larger group of poems I wrote when I was living in New York and knew I’d be leaving that city after about ten years. I decided I wanted to commemorate my time there somehow. I was struggling with a dedicated writing schedule, and having just moved in with Chris, who has a fantastically disciplined work ethic when it comes to writing, I was inspired to write a poem each time I crossed the Manhattan Bridge, which I did on the subway each time I went to work and each time I came home. This meant I accumulated a lot of poems very quickly, and because the poems were written in the same space, at roughly the same times of day, the imagery from poem to poem binds the group together. And I chose a form that used the same first and last line, so formally the poems are very similar also. 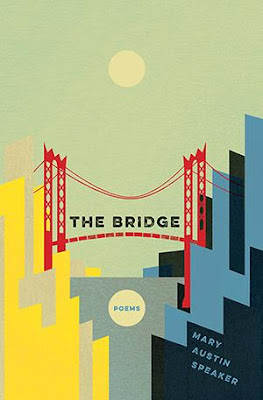 Compared to the poems that made up her first collection, Ceremony (Slope, 2013)[see my review of such here], The Bridge is her first published book conceived as a collection from the very beginning. Speaker has previously discussed a variety of shorter works, such as 20 Love Poems for 10 Months [see my review of such here] (which later became part of Ceremony), that were composed with similar considerations, but the difference between the two full-length collections becomes interesting, and it will be curious to see if Speaker continues along this vein: if books will exist as single, full-length projects, or a combination of single projects and collections of shorter, stand-alone, chapbook-sized works. Composing rough drafts twice daily over an extended period, The Bridge is comparable to Frank O’Hara’s daily noon-time compositions that made up his Lunch Poems (City Lights Books, 1964), and manages to connect to considerations of writing as daily practice organized around unrelated full-time employment. Through her use of untitled sketches composed of short-lined stanzas, she also employing means similar to Harvey Kietel’s character in the movie Smoke (1995), who took daily photographs of the same streetcorner at the same time over a space of years: after a while, the obvious elements of fall away, leaving both photographer (and poet) and viewer/reader to engage with the nuances of what remains. As she writes to open the poem that begins the collection: “every morning going over the bridge / everybody going in to work / and me as well and me as well [.]”