For the sake of the fortieth anniversary of the writer-in-residence program (the longest lasting of its kind in Canada) at the University of Alberta, I have taken it upon myself to interview as many former University of Alberta writers-in-residence as possible [see the ongoing list of writers here]. See the link to the entireseries of interviews (updating weekly) here. 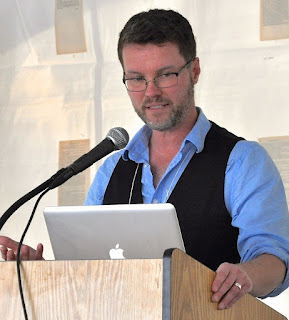 Thomas Wharton was born in Grande Prairie, Alberta. His first novel, Icefields (1995), won the Commonwealth Writer’s Prize for Best First Book, Canada/Caribbean division. His second novel, Salamander (2001), was short-listed for the Governor-General’s Literary Award and the Rogers Writers’ Trust Fiction Prize. A collection of short fiction, The Logogryph, published in 2004 by Gaspereau Press, won the Howard O’Hagan Prize at the Alberta Book Awards, and was shortlisted for the IMPAC Dublin Prize.

Wharton has written a YA fantasy trilogy, The Perilous Realm (2008-2013). His most recent book is the eco-fiction Every Blade of Grass, self-published in 2014. Currently he is working on a new collection of fantastical tales. His work has been published in the US, UK, France, Germany, Italy, Japan and other countries.

Thomas Wharton is an associate professor in the department of English and Film Studies at the University of Alberta, where he teaches creative writing. He lives in the countryside near Edmonton with his wife and three children.

He was writer-in-residence at the University of Alberta during the 2002-3 academic year.

Q: When you began your residency, you’d published two novels over the previous eight years. Where did you feel you were in your writing? What did the opportunity mean to you?

A: At the time I started my residency I’d written a third novel that both my agent and my publisher had a lot of doubts about. I shelved it in frustration and began another project I’d had on the go for a long time: a collection of stories about mysterious, magical books. The residency gave me the security and the renewed confidence to let go of the one project for the time being and start this new book about books.

A: No, my first residency was at Grant MacEwan University in 1999. That was a four-month residency, I believe.

A: I don’t know if I saw it as an opportunity for me as an Edmonton writer, per se – it’s actually taken a long time for me to think of myself as an Edmonton writer – I’ve lived in other places for much of my life, and now I live outside the city, so I don’t know what to call myself anymore. I just felt honoured that the committee thought my work made me worthy of the job!

A: Interestingly I didn’t meet with many students during my residency. Most of the people who came to see me were people from Edmonton and surrounding communities. I had the feeling most of them were more aware of the residency and what it could do for them than most students were. I also felt that students saw the writer-in-residence as another authority, like one of their professors, and this may have been why some were reluctant to have their work read and critiqued. Although I did have one student drop by one afternoon and ask me if I would read his essay and give him some feedback because he had to hand it in ... in half an hour!

A: I met with people who were having difficulty with their writing in one way or another – either because they were struggling to get started as writers or had stalled on a project. It was a good feeling to work through some of the issues with them and to bring in my own experience in order to help them get some perspective on their own. There were also a few challenges in working with people who simply wanted confirmation from me that their work was wonderful, and when I couldn’t affirm that, they weren’t always pleasant about it.

A: It was my first major writer-in-res gig, and at that point I hadn’t done much creative writing teaching. So helping other writers really gave me an opportunity to articulate (to myself as much as to the writers who came to see me) what I have learned about good writing. I think the experience made me work harder and think more deeply about what I was doing as a writer.
Posted by rob mclennan at 8:31 AM
Labels: Gaspereau Press, NeWest Press, Thomas Wharton, University of Alberta, writer-in-residence