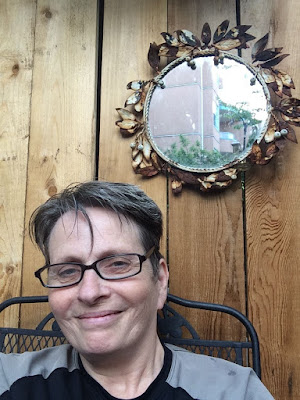 Jane Eaton Hamilton is the Canadian author of 9 books of short fiction and poetry. Her novel ‘Weekend’ is forthcoming in 2016. Her memoir ‘Mondays are Yellow, Sundays are Grey,’ retitled No More Hurt, was a Sunday Times bestseller and included on the Guardian's Best Books of the Year list. Her books have been shortlisted for the MIND Book Award, the BC Book Prize, the VanCity Award, the Pat Lowther Award and the Ferro-Grumley Award. She is the two-time winner of Canada's CBC Literary Award for fiction (2003/2014). Her work is included in The Journey Prize Anthology, Best Canadian Short Stories and appears in publications such as Salon, NY Times, Seventeen magazine, MS blog, Full Grown People. A queer feminist, she lives in Vancouver.

1 - How did your first book change your life? How does your most recent work compare to your previous? How does it feel different?
My first book, an illustrated children’s book from Press Porcépic in the 1980s, didn’t change to my life other than giving me the opportunity to apply to the Writer’s Union for membership.

2 - How did you come to fiction first, as opposed to, say, poetry or non-fiction?
I started writing fiction in grade seven, when a teacher gave the open-ended assignment “write 500 words.” It seemed achingly long but intriguing; I remember writing three or four pieces to fill up that cumbersome space—I vaguely remember a graveyard, fog, a horse, a man named John. As a teen, I wrote angst-ridden poetry. I started writing seriously when I was living in NYC. I’d gone to Ntozake Shange’s For Colored Girls Who Have Considered Suicide But the Rainbow is Enuf and walked out writing and hooked.

Short fiction has my heart.

3 - How long does it take to start any particular writing project? Does your writing initially come quickly, or is it a slow process? Do first drafts appear looking close to their final shape, or does your work come out of copious notes?
Voice-driven stories appear close to their final shape, but other stories are written over long periods. Novels of course have to go through agonizing rewrites and many drafts.

4 - Where does a poem or work of fiction usually begin for you? Are you an author of short pieces that end up combining into a larger project, or are you working on a "book" from the very beginning?
I don’t write stories as part of a book, generally, except when I’m working on a grant, and even so I’ve never intentionally linked stories.

Usually a story begins with a fragment, either something I’ve written that seems to have energy or something I’ve overheard. Or I just have a character talk—that can certainly do the trick, though their monologue or convo may not appear in the final draft.

5 - Are public readings part of or counter to your creative process? Are you the sort of writer who enjoys doing readings?
I am morbidly shy, but love reading my work. What I can’t easily do is the extemporaneous remarks around the reading. Part of it is that I get angina from nerves and tending that takes all my extra energy.

6 - Do you have any theoretical concerns behind your writing? What kinds of questions are you trying to answer with your work? What do you even think the current questions are?
I have this concern: Who is this person/people? What do they want? What is their story? Where will they lead me and why?

I don’t want to know the answers to these questions as I go.

And also I often have this concern: What are the social justice issues behind the story? What is the world like for women and children?

I wrote a story recently where the mother of the protagonist was an octopus, ONLY HUMANS, and it seemed to me as I wrote it that it was clearly about the plight of refugees. Another story I wrote, THE RIVER OF RUNNING SAND, was about multi-generational Thai refugees who have no papers, and thus no country. At the time I wrote it, Canada was considering adopting a policy of denying citizenship to infants born on our soil to immigrant/refugee claimants, so thought the story doesn’t mention that, it was propelled by concern about it and what that does to people over time.

I once wrote a story about refugees from Central America traveling through Mexico into the US. I’ve written about saving wild mustangs in Nevada, about being a trans kid in S Africa, about being the husband of a woman who’s had a mastectomy, about a kid thinking Richard Speck was going to kill her mother, from the point of view of Ted Bundy’s mother as he faced execution.

How can we be writers and not respond to the world? When things get most dire, we write against oppression.

8 - Do you find the process of working with an outside editor difficult or essential (or both)?
Essential. Rarely difficult. I am a big enthusiast of editing. To me, this is the stage where a piece starts to live up to its potential.

9 - What is the best piece of advice you've heard (not necessarily given to you directly)?
Embrace the editorial.

10 - How easy has it been for you to move between genres (poetry to short story to novel to memoir)? What do you see as the appeal?
Completely easy. I don’t know why it happens. I try not to write poetry (I’m sure I’d be a better poet with some attention paid to it). I’d be happy just to write stories, but sometimes something starts that is a sustained work.

12 - When your writing gets stalled, where do you turn or return for (for lack of a better word) inspiration?
I used to have no way out of a writer’s block. Now I rarely get blocked. Words attract words, I find, and if I keep at a story through a few pages of pap, usually a phrases will eventually announce itself that is the kernel of what I’m looking for. A phrase or a paragraph with verve. Something I can work from.

14 - David W. McFadden once said that books come from books, but are there any other forms that influence your work, whether nature, music, science or visual art?
For me, not music so much, but the rest. I find absolution in nature, hope in science, explication in visual art.

15 - What other writers or writings are important for your work, or simply your life outside of your work?
I have a strong habit of turning to US writers because I lived in the States for some influential young years—I became an adult there. I have the usual influences for stories, but let me mention just a few—Lorrie Moore, Pam Houston, Annie Proulx, Alex Leslie, Mary Gaitskill, Mavis Gallant, Flannery O’Connor, Eudora Welty.

17 - If you could pick any other occupation to attempt, what would it be? Or, alternately, what do you think you would have ended up doing had you not been a writer?
Science. I wanted to work in animal communication but I was stymied by illness.

18 - What made you write, as opposed to doing something else?
Illness. I needed something to do when at 31 I became too disabled for employment.

It’s impossible to say with books; so many are so very good. Again, I’ll stick to those authored by women, a few:

And here’s a non-fiction book I loved:

The Spirit Catches You and You Fall Down: A Hmong Child, Her American Doctors, and the Collision of Two Cultures, Anne Fadiman

20 - What are you currently working on?
Two novels: WEEKEND, a simple queer love story coming out May 2016, and THE LOST BOY, a story of a girl’s coming-of-age in a Canadian internment camp in the early 1940s. A short story collection, INTERSPECIES COMMUNICATION. If I get through those in 2016, I’ll pick up with THE EGG COLLECTOR, a novel where the protagonist is an ornithologist wrangling with egg poachers in BC. I have a first draft of that and somewhat of a direction for it.