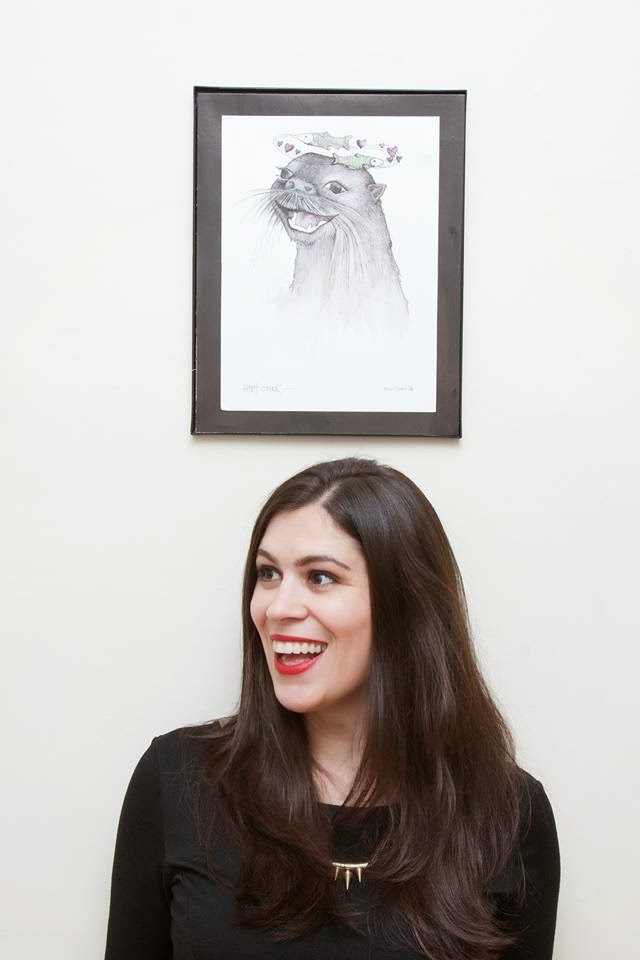 Dina Del Bucchia was born in the Trail Regional Hospital, grew up in the village of Fruitvale, BC and now lives in Vancouver.  She is a creative director of the Real Vancouver Writers' Series and has coordinated and hosted numerous other literary events and performed a one-woman show at the Vancouver Fringe Festival and is editor of the Humour issue of Poetry Is Dead. Her short story, “Under the ‘I’” was a finalist for the 2012 RBC Bronwen Wallace Award for Emerging Writers. She holds an MFA in Creative Writing from the University of British Columbia and has taught creative writing to young people. She is the author of Coping with Emotions and Otters (Talonbooks 2013) and the upcoming Blind Items (Insomniac Press, 2014) and her work will be included in Why Poetry Sucks: Humorous Avant-Garde and Post-Avant English Canadian Poetry edited by Jonathan Ball and Ryan Fitzpatrick (Insomniac Press, 2014).

1 - How did your first book change your life? How does your most recent work compare to your previous? How does it feel different?
This first questions is so personal. Life change! Scary. I don't know if anything has changed. I'm still writing and my life is still mostly the same. Where are the cashmere blankets and convertibles I was promised? I'm trying to focus on fiction right now, but the genre switch doesn't feel as jarring as I thought it would. But it does feel more difficult. The fiction muscles are weak.

2 - How did you come to poetry first, as opposed to, say, fiction or non-fiction?
As a writer I didn't come to poetry first. I'd been learning about and writing both fiction and poetry for the same amount of time. Now, non-fiction. That's too intimidating. That is serious shit where if you lie about something then Oprah yells at you on television.

3 - How long does it take to start any particular writing project? Does your writing initially come quickly, or is it a slow process? Do first drafts appear looking close to their final shape, or does your work come out of copious notes?
The initial writing comes quickly. And depending on the piece some things look very similar to their original first drafts and others get serious plastic surgery. I like to free-ball it for a while before I really start editing and getting things into their final shape. Notes come when I force myself to get serious.

4 - Where does a poem usually begin for you? Are you an author of short pieces that end up combining into a larger project, or are you working on a "book" from the very beginning?
Poetry-wise I like a big project. I like a series, a sequence. Exploring an idea in different ways, just pushing and pushing a concept. Usually I'm not finished with an idea until I've sucked all the drops I can suck out of it. I'm sure this stems from a super healthy obsessive quality.

5 - Are public readings part of or counter to your creative process? Are you the sort of writer who enjoys doing readings?
For me public readings are a part of my creative process. I read things aloud while writing. I like an audience's reaction. I enjoy planning literary events that are both traditional and also more unusual. The entertainment value of listening to people tell stories and read their work is underestimated. And I like attention and readings provide me with that. When people try to use attention-seeking as an insult I feel like they're probably really bored.

6 - Do you have any theoretical concerns behind your writing? What kinds of questions are you trying to answer with your work? What do you even think the current questions are?
Much of my writing stems from pop culture and our engagement with it, but I don't know that I'm providing any answers. I’m questioning and hopefully providing a shred of insight. There are never-ending current questions.

8 - Do you find the process of working with an outside editor difficult or essential (or both)?
I've found it enjoyable. Working with Garry Thomas Morse on Coping with Emotions and Otters and Sachiko Murakami on Blind Items were two really wonderful experiences. They were essential.

9 - What is the best piece of advice you've heard (not necessarily given to you directly)?
Listening to advice is a sketchy game. There’s so much of it. It's an avalanche of everyone knowing what's "right." But, I'd say the best advice I've heard is to know/figure out what works for you.

11 - What kind of writing routine do you tend to keep, or do you even have one? How does a typical day (for you) begin?
I have a somewhat unpredictable schedule and I don't have a routine. I have writing goals and I take those seriously. Typical day: Find time. Don't mess around too much during that time. Reward(s).

12 - When your writing gets stalled, where do you turn or return for (for lack of a better word) inspiration?
Naps.

13 - What fragrance reminds you of home?
Nothing! I am terrible with smells. Only when I'm surprised by something familiar, really caught off guard do I register that there is some memory attached to that smell. And it doesn't happen very often. I used to get a weird, uncomfortable nostalgia from a whiff of ck one. Good old high school dances.

14 - David W. McFadden once said that books come from books, but are there any other forms that influence your work, whether nature, music, science or visual art?
TV, movies, comedy, magazines, memes, fashion, visual art, animals, advertisements, memes, YouTube.

15 - What other writers or writings are important for your work, or simply your life outside of your work?
The writers that are truly important to my work and life are the ones in my life. My writing group, people I've been with for over nine years. All of my other friends who are also writers. And people like Leonard Cohen and Lena Dunham. These are my people. Also, a Cohen-Dunham production needs to happen. Now.

16 - What would you like to do that you haven't yet done?
I'd love to write for a teen drama. Degrassi, and less serious ones like Gossip Girl and Pretty Little Liars, are a delightful addiction. The story lines are so outrageous and fun and often nonsensical. They're the best.

17 - If you could pick any other occupation to attempt, what would it be? Or, alternately, what do you think you would have ended up doing had you not been a writer?
I've always said that ice cream tester seems like the best job. I mean, you get to test and taste ice creams. Also on the list: lipstick namer and personal stylist. Of course I’d love to run my own television network for teens. Teen TV all day long!

18 - What made you write, as opposed to doing something else?
Well, as a writer I do lots of "something else" so I can be alive and buy dresses and food and drink. The something else allows for the writing. The simple answer is that I've always loved stories. If you're not great at anything that actually makes money then you should do what you love.

The Lego Movie. Great story, great characters, great voice acting and great jokes. So many greats.  I guess I thought it was great.

20 - What are you currently working on?
Many things. I just finished a draft of a collaborative project on rom coms with Daniel Zomparelli. And I've guest-edited the Humour Issue of Poetry Is Dead. I've been working on finishing a collection of short stories since I felt young enough to be IDed. Novel dabbling. Co-creative directing the Real Vancouver Writers' Series. Jotting down notes for other unformed projects. I like to mix it up.