Mary Ruefle, Trances of the Blast

When are we happiest? he asked her.
Not one of them could get the seats
to go back, not one of them really knew
what was in the glove box, though
everything there was theirs.

When they got to where they were going,
a park, a gray squirrel came jumping along.
Childhood! It was in one of the houses nearby.
Money! Every day it seemed to loose itself
from its lurking-place and drift away.

So he smelled the underside
of his own arm. And the squirrel
paused, one of those little eternities
never mentioned again. 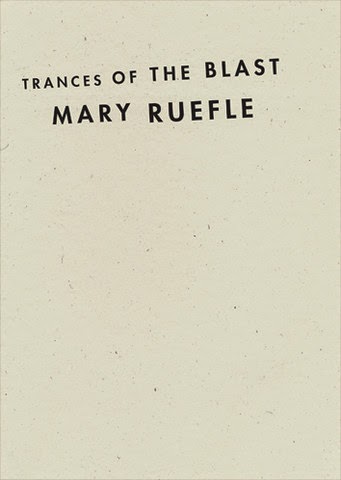 American poet Mary Ruefle’s first trade poetry collection since her Selected Poems (Seattle WA/New York NY: Wave Books, 2010) is Trances of the Blast (Wave Books, 2013). Ruefle’s short, sharp lyric poems poems are very much about precision, presenting tightly-composed poems that make enormous cognitive leaps and contain galaxies of dark matter, highlighting the occasional, essential point of light. What I like about her poems is the oddball, quirky humour through the stretches of meditative lines, akin in certain ways to the poems of San Diego, California poet Rae Armantrout for their meditative stretches and leaps, and in other ways akin to the poems of Cobourg, Ontario writer and editor Stuart Ross for their observational humour and disjunctive moments of surrealism. Ruefle’s poems are firmly grounded, practical and straightforward in such a way that could be deemed pessimistic, with regular strains of dark and even outlandish humour, providing the most wonderful blends of wit and wonder, quirks and seemingly-random facts. “I was deeply troubled as I began my journey / to the end of the long smile.” she writes, to open the poem “Dolorous Interlude.” Or the poem “A Penny for your Thoughts,” that opens with: “How are we to find eight short English words / that actually stand for autumn? / One peculiar way to die of loneliness / is to try.” Hers is a poetry that fights its way through the dark, even against impossible odds, forcing its own kind of dark optimism. Her poetry owns that darkness, and nearly revels in those spaces. And then there is the last stanza of the poem “Provenance,” that reads:

I hated childhood
I hate adulthood
And I love being alive