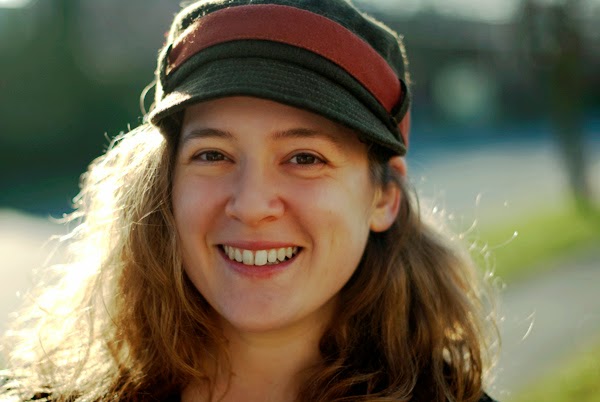 Andrea Routley’s work has appeared in numerous literary magazines, including The Malahat Review and Room Magazine, and in 2008, she was shortlisted for the Rona Murray Prize for Literature. She is the founder and Managing Editor of Plenitude Magazine, Canada’s queer literary magazine. She edited Walk Myself Home: An Anthology to End Violence Against Women (Caitlin Press, 2010), which continues to receive praise from magazines like Bitch, Herizons, Prairie Fire and the Vancouver Sun. Her collection of short fiction, Jane and the Whales, was published by Caitlin Press. In 2012, she completed a degree in writing from the University of Victoria. She lives in Halfmoon Bay, BC.

1 - How did your first book change your life? How does your most recent work compare to your previous? How does it feel different?
My book came out just a few months ago, but definitely one of the ways it's changed my life is by putting me in touch again with Vici Johnstone, the publisher at Caitlin Press, who recently hired me as the new publicist. After years of seasonal work, punctuated by university classes and odd jobs, I have a regular paycheck and it feels fan-fucking-tastic.

2 - How did you come to fiction first, as opposed to, say, fiction or non-fiction?
I wrote a little non-fiction as class assignments, but it just never fired my imagination the way fiction does. I love not knowing what's going to happen to a character. All those fabulous "ah-ha" moments I get to have. Or,"Of course he has to kill those freaking birds!" Things like that. I get to collage all kinds of personal experiences and decoupage the crap out of it with interesting facts and notions. Does that metaphor work?

3 - How long does it take to start any particular writing project? Does your writing initially come quickly, or is it a slow process? Do first drafts appear looking close to their final shape, or does your work come out of copious notes?
Depends so much on the story. One of my favourite stories in the collection, called "Reflection Journal," is a story about a teenaged girl who is accused of sexual harassment by her male teacher. I wrote that story in two weeks, changed a few sentences, et voila. But other stories are virtually unrecognizable when compared to earlier drafts. The opening one, "Habitat" -- about an older dad coping with the loss of his sister and projecting like crazy onto his daughter's neglected guinea pig, Bubble Gum -- started out with twice as many characters and three times the page count. "Dog" started out on a football field at an urban Pride Festival and ended up in a campground up-island.

4 - Where does fiction usually begin for you? Are you an author of short pieces that end up combining into a larger project, or are you working on a "book" from the very beginning?
I think I'm a short fiction writer. I read novels and I think, Why is this story so long? Why doesn't this story start on page eighty? It's a whole other rhythm, but I'm reading more novels lately so I'm kind of getting into the swing of it again.

For my short stories, it varies. Sometimes I have a first sentence and run with it. Sometimes I have something that's going to happen to this person at the end and build to that. Other times I just want to write about a crazy class-conscious etiquette-obsessed insecure asshole.

5 - Are public readings part of or counter to your creative process? Are you the sort of writer who enjoys doing readings?
It's funny because I've been performing music for years now. I stand in front of audiences -- sometimes big halls, sometimes small intimate rooms, in Canada, in Germany -- and I sing. Some people think that's sounds terrifying. Sometimes I sing and play accordion at the same time, which is kind of embarrassing, isn't it? Accordion. Puh-lease!

But reading from my book is actually pretty scary to me. After so many years of forcing my girlfriend to listen to me read my shitty first drafts, it just seems impossible that people may actually want to hear this. But they do!

6 - Do you have any theoretical concerns behind your writing? What kinds of questions are you trying to answer with your work? What do you even think the current questions are?
One thing I'm conscious of in my writing is how I contextualize certain experiences. For example, the title story, "Jane and the Whales," is definitely about a queer experience -- searching for spiritual depth and meaning in the marginalized spaces of a gay bar, the historical centre of queer culture. But other queer characters are simply queer without it having any bearing on the plot. In "Art," a story about a middle-aged daycare worker hoping to find fulfillment in a new career in education, there is one line alluding to an ex-girlfriend, and that's all. By making details like this incidental, it characterizes them as "normal" (not quite the word I’m looking for, but you know what I mean). When a queer character appears, they don't have to represent a "queer experience."

7 – What do you see the current role of the writer being in larger culture? Does s/he even have one? What do you think the role of the writer should be?
Art is always asked to justify itself, to measure its own value. But to take a stab at it (because that first sentence was really just a cop-out) I think different writers see themselves as having different roles -- not always the same ones that others' perceive them to have. Some books are not the most fantastic literary crafted wow-look-at-that-technique, Holy Metaphor! kind of books, but they are powerful because they tell stories that have been historically overlooked. Sometimes they are both Wow, and telling those stories.

I thought my stories were "playful and poignant" but people are telling me they are "dark, smart and witty." That sounds good to me, but certainly suggests my role may not be what I thought it was ...

8 - Do you find the process of working with an outside editor difficult or essential (or both)?
Essential, and not difficult at all. I love it. It's transformative and exciting to see a piece evolve with that kind of guidance and attention from experienced editors. If it's "difficult" for some, there may be some ego getting in the way ... just sayin'. A story is not you, it is a story.

9 - What is the best piece of advice you've heard (not necessarily given to you directly)?
“You can't please everyone.”

10 - How easy has it been for you to move between genres (fiction to critical prose)? What do you see as the appeal?
My genres are fiction, book reviews, emails, press releases, tweets and Facebook status updates. But actually, it is difficult to write informal emails and blog comments all day and then sit down to work on a story. I think this is a challenge that a lot of people can relate to …

11 - What kind of writing routine do you tend to keep, or do you even have one? How does a typical day (for you) begin?
I suppose I've maintained my teenaged routines of binge and purge. A lot of food/alcohol/writing followed by periods of nothing at all. But during the "dry spells" I do try to write a little in the morning before work, either some prompts or writing scenes, or working on a story -- something to stay in touch with that part of me, and keep me paying attention to the world and its inhabitants.

12 - When your writing gets stalled, where do you turn or return for (for lack of a better word) inspiration?
I read something excellent. Madeline Sonik's Afflictions and Departures has inspired many frenzied writing prompts. She is so inventive.

13 - What fragrance reminds you of home?
My apartment in Victoria with my girlfriend Auto -- she burns cedar sometimes or smudge sticks. She is the inspiration behind every cute butch character I write.

14 - David W. McFadden once said that books come from books, but are there any other forms that influence your work, whether nature, music, science or visual art?
Music is definitely a major influence in the title story, "Jane and the Whales." And certainly nature -- animals, specifically. Many of my stories explore connections with animals, not simply as projections of human emotion, but our shared experience of attempting (often failing) to find a place in the world.

15 - What other writers or writings are important for your work, or simply your life outside of your work?
I'm sure everyone says Alice Munro, right? But Alice Munro. Madeline Sonik is an awesome writer and an amazing teacher. Really enjoyed Kilter by John Gould, his collection of flash fiction. I love his sense of humour. Michael V. Smith's short story "What We Wanted" kind of jolted me out of my literary closet. I came out in 1996, but it took a LOT longer for a queer character to find its way into a story ...

16 - What would you like to do that you haven't yet done?
I want to follow my friend Yang around SE Asia while he does his PhD research in contemporary art of the Chinese diaspora. Yang is a funny guy and we're both kind of lazy, so he'd be a great travel buddy.

17 - If you could pick any other occupation to attempt, what would it be? Or, alternately, what do you think you would have ended up doing had you not been a writer?
I was an opera student once at McGill. I have to stop bringing that up. Yes, I quit. Now I am a scummy fiction writer.

18 - What made you write, as opposed to doing something else?
I feel really cluttered and despairing sometimes. Writing gives a shape to all this. (This=life stuff). Someone said to me recently that she thought it was odd how many of my stories are “dark” because I seem like such a happy person. And I am a happy person, but I think it may be in part because I can write about all that other stuff. I sometimes joke that I was a depressed and self-injuring teen because Hey, it was the 90s. You know. Grunge music and all. Turn it into fiction and it becomes something else.

20 - What are you currently working on?
Thinking a lot about salamanders these days and parthenogenesis. Maybe it's my biological clock, although I have no plans to parthenogenesize at this time …