LC: Is that a poetry credo emerging in a couple pages of In Flux where you step out of your critic’s role and explicitly write “as a poet” (In Flux 203)? It starts for me with “somatic markers” that when articulated in language, “we associate,” you say, “with the becoming of subjectivity” (203).

RM: Your question is not an easy one for me to unravel. You’re citing from an essay on Rita Wong where I focus on the body as a living organism. The body generates a complex of affects in our daily lives, and these often go unnoticed because it is treated as an object to be appropriated, glaringly so in violent confrontations, rather than as a complex life network of somatic processes.
I’m approaching some very tricky areas of poetic thought here, but as a poet my understanding is that the normalized discursive frames through which the world makes sense to us, as well as for us—in other words, again, what-goes-with-out-saying—are enabled in the exclusion of somatic contingencies, including the finitude of organic processes. In our corporate capitalist culture of commodities the body becomes the target of so many discursive operations from seemingly benign advertising to the extreme violence of warfare, and in between these huge corporate interest in biotechnological knowledge.
Language plays a crucial yet mostly transparent role in sustaining the normalization of dominant representations, but when language is rendered opaque or made otherwise non-transparent as a channel of communication, for instance in poetic texts, we begin to apprehend the processes of becoming that have the potential not only to expose the limits of normalization but to transform them, we hope progressively, so that they are more inclusive than they were before.
Here I’m talking about the creative process in general, but in some instances the “becoming of subjectivity” emerges in a more shared sense when dominant representations are seemingly spontaneously exceeded or undermined by what is then a newly identified group. The term “redress,” for instance, constituted a Japanese Canadian group in creating a movement to seek justice for the past injustices related to mass uprooting, dispossession, and internment. Perhaps this is a way of thinking about the current Idle No More movement that has emerged through the coalitional action of young aboriginal activists who are motivated by the words Idle No More. By responding to the call for action in the phrase they have exposed the dominant representations of aboriginality as extensions of a colonial system with a history as long as the Canadian state’s existence. But then again, the shift from writing a poem to a social movement may be too far-fetched a move. 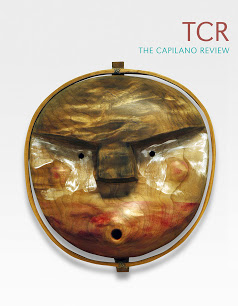 The Capilano Review 3.20 (spring 2013) opens with a small section on the Vancouver poet, critic, bibliographer, teacher and activist Roy Miki, including a new poem, “Please,” an interview conducted by poet and critic Louis Cabri, as well as a review essay by Cabri on Miki’s Mannequin Rising (New Star, 2011). Miki’s contributions to literature and culture have been explored and celebrated on more than a few occasions over the past few years, including through the recent anthology Tracing theLines: Reflections on Contemporary Poetics and Cultural Politics in Honour ofRoy Miki (eds. Maia Joseph, Christine Kim, Larissa Lai and Christopher Lee; Vancouver BC: Talonbooks, 2012). Where the anthology focused on where Miki was and has been throughout his work as writer, critic, teacher and activist, this small feature in The Capilano Review focuses more on Miki’s current work, and what lies ahead. Cabri writes in his essay:

Pre-eminent experimental writer Nicole Brossard has recently remarked in interviews (e.g. The Gazette, February 26, 2013) that, following a heyday in the 70s and 80s, experimental writing had left French-language poetry in Quebec in favour of “what was called The New Readability.” For a while, I and other translators felt this dearth in Quebec poetry of the type of experiments with forms, sounds, effects, meanings that writers such as Brossard had introduced into the culture. There were still experiments, of course, but they were much quieter in their torquings.
In the last ten years, though, publishers such as the pioneering Le Quartanier, La Peuplade, and others have provided national (Quebec) and transnational forums for young writers who not only produce amazing risk-taking writing in French but collaborate across boundaries with Europeans, US Americans, and Canadians in English to produce further works, flows, excitements. Meanwhile, in L’Acadie in New Brunswick, across the Quebec border to the east, established writer France Daigle will soon see her monumental novel Pour Sûr appear in the English translation of Robert Majzels. I include her because what Quebec-Alberta writer Majzels chooses to translate is part of the endeavor of opening new possibilities in French, and thus in English. And one contributor, yes, is a ghost from where the past and future overlap: in the machine itself.
The writers and translators (and one commentator) in this section are all worth watching, the writers in their own right and as translators, and the translators for their own writing as well. I feel privileged to work among them, and to lend my hand as translator in their midst. I hope you enjoy these foments and new directions in words from Acadia and Quebec—not the avant-garde but a New Regard.

Much of the work included in the section is quite spectacular, and breathes a new kind of life into the form of the Canadian prose poem, such as Suzanne Leblanc’s sequence, “P.’s House for Thinking,” that includes:

It was an abstract house, a construction of the mind. I ordered my memory there by an ancient process of remembrance. My tongue sought its speech. My will was oratorical. I would be no less abstract than the discourse of the philosopher, whose oeuvre had convinced me, whose life I admired. I would be no less constructed than this memorization of my singular voice, where I had chosen to stay.

Outside the features in the issue also includes new work by Toronto poet Lise Downe, “from Propositions.” New work by Downe is a rare occurence, and something worth noting, reading and almost celebrating. Another highlight is the collaboration by Ted Byrne and Christine Stewart, “from St Paul.” The second in her collaborations with Byrne, she has also published a recent title in collaboration with Toronto poet David Dowker, Virtualis: topologies of the unreal (Toronto ON: BookThug, 2013). The cover to the new issue features a stunning Alutiiq mask, One of the Old Men (2003), by Alaskan artist Perry Eaton, and the issue includes a folio of photographs of others of his masks, as well as an interview conducted by Colin Browne:

Colin Browne: “Yellow Singer” has a very beautiful, quizzical look on his face, which, I confess, makes me see him as a poet.

Perry Eaton: I think I can understand that. “Yellow Singer” is a type of mask made to be danced, with a whistle that sends sound between the worlds.

PE: I can only tell you so much. I’d heard stories about the wooden whistle that you hold in your mouth when you dance, but I didn’t appreciate how important the sound quality was. When you look at the masks in the Chateau Musée, in the Pinart collection, and when you turn them over, the back of the mask can reveal as much as the front. The insides of the round-holed singing masks are finished very smoothly in the mouth area, which suggests that the audio tone was very important. I think in a way these were tuned instruments, and the whistle used was a very controlled sound, but we’ve never found one so we don’t know. We’ve gone through the literature. You’ll read two hundred pages to glean a line. There’ll be one line that’ll give you a clue. You accumulate these single lines; you start to put them together and you get images.