which is used to batter history 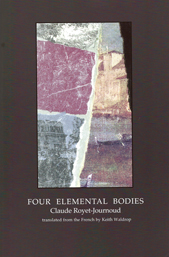 Parisian writer Claude Royet-Journoud’s Four Elemental Bodies (trans. Keith Waldrop; Providence RI: Burning Deck, 2013), collects a tetralogy of four works, the first three of which appeared previously as Reversal (Providence RI: Hellcoal, 1973), The Notion of Obstacle (Windsor VT: Awede, 1985) and Objects Contain the Infinite (Windsor VT: Awede, 1995). Collected as a single unit for the first time, Four Elemental Bodies is a collection of lyric point-form, poems structured as a series of sketched-out sequences of stripped language. His is an infinite puzzle of impossible fragments that come together to form something whole and yet, like a series of Russian dolls, a single project constructed from a sequence of smaller units, each of which is made up of a further series of smaller units, and so on. In English translation, Royet-Journoud is also the author of “The Maternal Drape” or the Restitution (trans. Charles Bernstein; Windsor VT: Awede, 1985), Theory of Prepositions (trans. Keith Waldrop; Iowa City and Paris: La Presse, 2006) and The Whole of Poetry is Preposition (trans. Keith Waldrop; Iowa City and Paris: La Presse, 2011), the second two I’ve been fortunate enough to read, and each sparked a series of responses, much of which I am still attempting to process.

a sentence abandoned
that’s where they set out from

As the blurb on the back of the cover highlights, Royet-Journoud “is one of the most important contemporary French poets whose one-line manifesto: ‘Shall we escape analogy’ signaled a revolutionary turn away from Surrealism and its lush imagery.” It’s interesting that the publisher highlights this line that opens the fifth section of “Reversal” when the entire four-part suite of combined texts is rich with equally jarring lines, traces of perception and observation, from “silence is a form” and “repossession of the neutral / when the body is a sentence yet to come” to “distance is the place” and “behind the image / there is no further recourse / the inertia of things empties out emotion.” His entire ouvre, it might seem, is rife with phrases, lines and sentences that might spark a change in perception, each placed on the page with a terrifyingly pinpoint accuracy.

silence is a form

air that he calls imperceptible
no separation
the animal site

a fistful of blue in the corner