Rocky, uneven, enclosed by chaparral then opening onto pasture, our sightline belonged solely to path. Deer-track lent color, umber & ochre; rock, light-struck, clips of scintilla; bark, lichen’s mimic signature. It was like having to choose—matter or the look of matter?—& getting lost in the distance before a choice. We walked there, seeing the way scat contains hunger’s evidence & residue—seed, fiber, fur, bone. Thus concentrated, vision became more. (“Atlas Peak”)

The proper use of open space on the page is a rare commodity in poems, and one that runs the entire length of Philadelphia poet and publisher Brian Teare’s fourth trade poetry collection, Companion Grasses (Richmond CA: Omnidawn, 2013). I can only think of a handful of other poets who have properly explored and used the white space of the page, including the lateToronto poet bpNichol and Saskatchewan poet Sylvia Legris. There is something enviable in the open spaces of Teare’s poems, and the way he allows his lines to properly breathe, composing his grounded, meditative stretches across his self-descriptive “bioregion and microclimate” of “California’s chaparral and grasslands.” In Teare’s “TALL FLATSEDGE NOTEBOOK,” subtitled “( Cyperus Eragrostis ),” there are echoes of the Latinae of Legris, but also of poems by Vancouver poet Fred Wah, including “Limestone Lakes Utaniki” of So Far (Vancouver BC: Talonbooks, 1991), for the note-taking lyric stretch, the narrative collage and the exploration of the outdoors. Teare’s poem includes:

A mile’s hike outside the fence-enclosed vista point
we sat hillside so inside experience I wrote the wrong date
down—March twenty-second—noticing no thought
but things : “when I think they animate my interior speech,
they haunt it as the little phrase.” Ocean-tilted, the whole
thing leaning green, coastal prairie poised pre-Spring
a prosody for seeing landscape as aural, ambient trick
to hear the ear’s eye : far bass, near treble, I saw

Stretching across three sections, the musical quality of Teare’s poems elevate the ‘notebook’ suggestion of original composition, engaging in complex polyphony, a variety of structures and the play of language. As he writes to open the near-pointilist “LITTLE ERRAND,” “I gather the rain // in both noun / & verb. The way // the river banks / its flood, floods / its banks, quiver’s // grammar I carry / noiseless, easy / over my shoulder.” These are poems that exist in conversation with a great many other works, which seems appropriate, given that the opening epigraph is from Robin Blaser, whose work is also known for being a great companion in conversation with other texts. To open the notes at the end of the collection, Teare writes:

Given that the poems in Companion Grasses actively practice what Jed Rasula in This Compost: Ecological Imperatives in American Poetry calls “wreading”—a “nosing into the compost library”—what follows is largely bibliographic information about the texts that composed the “ecology of mind” from which the poems emerged. Given their composed states, the referenced texts might persist into the poems as either quoted or appropriated passages; whatever traces remain serve as evidence of an active engagement with the originals, which in all cases were inspirational in the sense that they helped the poems to breathe. 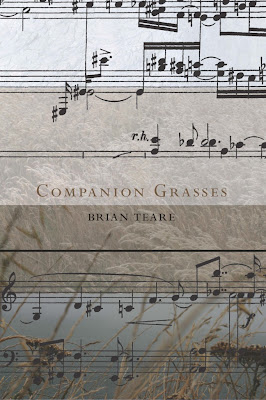 I’m fascinated in how his concerns in eco-poetics and/or the pastoral shape not only the subject matter, but in composition and the immediate language of constructing poems, deepening an appreciation of the “pastoral” as something that extends to and from the body and written language, as opposed to being separate from human consideration. As he writes as part of the author interview included with the press release: “It’s my hope that the formal range of the poems in this book bears out the experience I have as a working poet—that poetic form responds equally to content, the historical and literary and autobiographical contexts in which a poem is written, and the process of composition itself.” A particular highlight of the collection has to be the extended “ATLAS PEAK,” composed in homage to his late father, writing “Fatherless //// afternoon, very untitled death, / my father’s voice returns as echo // of my own good-bye, restoring to his absence / all lost, inaccessible inflections [.]” The “field guide” of Teare’s Companion Grasses is composed in a meditative, human language, one that deeply explores large ideas, specific geographies of California, and just what kind of effect writing, living and simply being in the world can have. As he writes in the poem “LARGO”:

If in falling       rain names what it touches