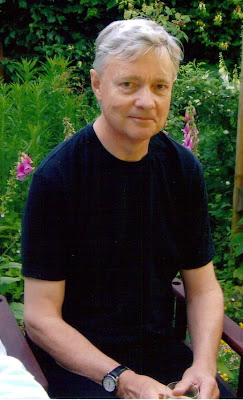 Laurie Duggan grew up in Melbourne and over the years has lived in Sydney, Canberra and Brisbane. Since 2006 he has been living in a market town East Kent in the UK and is a regular reader on the London poetry circuit. Works include the documentary poem The Ash Range (2nd ed), Exeter, Shearsman, 2005; and a critical volume Ghost Nation: Imagined Space and Australian Visual Culture 1901-1939, Brisbane, University of Queensland Press, 2001.  His most recent books are Crab & Winkle, Exeter, Shearsman, 2009; The Epigrams of Martial (2nd ed), Boston, Pressed Wafer, 2010; Allotments [1-29], Wendell, Massachusetts, Fewer & Further, 2011; The Pursuit of Happiness, Bristol, Shearsman, 2012; and The Collected Blue Hills, Sydney, Puncher & Wattman 2012.  His blog is at: www.graveneymarsh.blogspot.com

1 - How did your first book change your life? How does your most recent work compare to your previous? How does it feel different?
I was 27 when my first book (East, 1976) came out. It was a small book and I’d edited out quite a few things that I’d keep if I were doing it now. I’d been writing for a while so it didn’t really change my life much. What did change things a lot was the first reading scene I was involved in, in 1968, at Monash University in Melbourne. The first book tried out a number of styles. I still tend to operate in different modes though I guess the most characteristic work I’ve done dates from my second book. It’s a more open-ended ‘continuous nerve movie’ sort of thing. For a long time I wrote satires and I’ve also written poems ‘including history’. I think I’ve just become more proficient, hopefully without becoming slick.

2 - How did you come to poetry first, as opposed to, say, fiction or non-fiction?
I started writing poems in 1966 but I still didn’t think of myself as a poet. I’d wanted to write fiction (for which I have no talent whatsoever – and these days not much interest either), I’d wanted to be a painter (I wasn’t any good at it), and I’d wanted to be a rock star (like just about every other male of my vintage. I still noodle on a guitar but I wouldn’t kid myself about it). So I sort of blundered into poetry, then everything else fell away and that was what I was.

3 - How long does it take to start any particular writing project? Does your writing initially come quickly, or is it a slow process? Do first drafts appear looking close to their final shape, or does your work come out of copious notes?
It varies from work to work. Some things require a great deal of revision, others seem fully formed, but these have usually been percolating away off the page for some time.

4 - Where does a poem usually begin for you? Are you an author of short pieces that end up combining into a larger project, or are you working on a "book" from the very beginning?
I always keep a notebook. Occasionally I’ve worked at projects but the parameters have usually been simple ones. It’s always fascinated me that fragments of ancient poems can seem more interesting and more alive than some completely available things.

5 - Are public readings part of or counter to your creative process? Are you the sort of writer who enjoys doing readings?
I don’t think readings are as essential for me now as they were in the beginning but I like doing them and am a tolerably good performer. Readings are more of a social occasion for people who work in isolation.

6 - Do you have any theoretical concerns behind your writing? What kinds of questions are you trying to answer with your work? What do you even think the current questions are?
I function from doubt, if you could call that a theory. It means I can never satisfactorily justify or even explain what I do. At the same time I know what I don’t like.

7 – What do you see the current role of the writer being in larger culture? Does s/he even have one? What do you think the role of the writer should be?
I always tend to avoid being grouped as a ‘writer’ with others involved in political actions. I do get involved in political events but as a citizen rather than as a poet. I don’t think poetry gives me (or anyone)any special kind of authority. In this I’m with George Oppen.

8 - Do you find the process of working with an outside editor difficult or essential (or both)?
With poetry the only editing done on my work centres on questions of layout and general page design. With any other kind of writing I welcome editorial assistance. Good editors are a rare and wonderful species.

9 - What is the best piece of advice you've heard (not necessarily given to you directly)?
‘There are a lot of bastards out there’ (William Carlos Williams).

10 - How easy has it been for you to move between genres (poetry to critical prose)? What do you see as the appeal?
I do move between these two genres. The relationship is indirect but ultimately fruitful.

11 - What kind of writing routine do you tend to keep, or do you even have one? How does a typical day (for you) begin?
Sluggishly. I’m not terribly organised to start off with. But I do keep a notebook and keep it handy. So much of what I write in it is rubbish but if I didn’t do it I wouldn’t get the good things either.

12 - When your writing gets stalled, where do you turn or return for (for lack of a better word) inspiration?
I go for a long walk. Take photographs.

13 - What fragrance reminds you of home?
Eucalyptus after rain (Australia). Here (in Kent), malt from the local brewery.

14 - David W. McFadden once said that books come from books, but are there any other forms that influence your work, whether nature, music, science or visual art?
Just about every sort of experience enters the work. Including books.

15 - What other writers or writings are important for your work, or simply your life outside of your work?
The list would be endless. Williams is always there. Oppen, increasingly so. Then there are my long-time companions (and compatriots) Pam Brown and Ken Bolton. But there are so many others.

16 - What would you like to do that you haven't yet done?
Visit Portugal. And Chile.

17 - If you could pick any other occupation to attempt, what would it be? Or, alternately, what do you think you would have ended up doing had you not been a writer?
Everything I’ve done has, more or less, been by accident. I’ve been a number of things: a librarian, an academic, a cleaner, unemployed. It’s hard to say what else I might have done.

18 - What made you write, as opposed to doing something else?
Pure chance.

20 - What are you currently working on?
I won’t know until it’s finished.