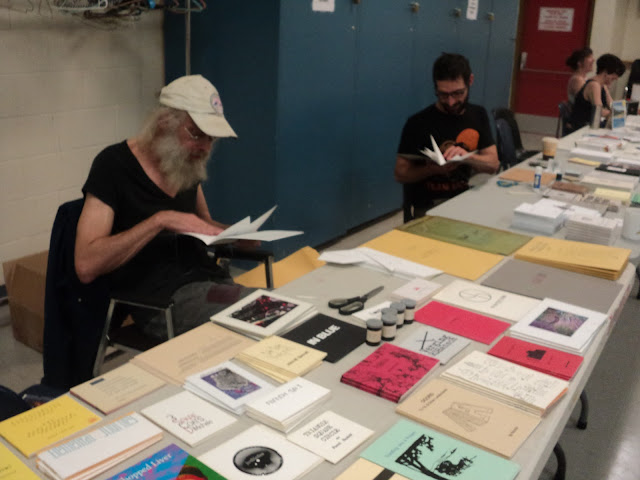 Kingston ON: Kingston poet and publisher Michael e. Casteels participated in the fair this year, bringing a number of publications through his Puddles of Sky Press, including his own work, and Jason Heroux’s recent chapbook In Defense of the Attacked Center Pawn (2013). Reading as part of the pre-fair event the night before the fair itself, he opened with pieces from his chapbook of prose poems, The Robot Dreams (Puddles of Sky Press, 2013):

A Brief History of the Ice Age

The primates spot-checked their harpsichords, spoon-fed the plesiosaur, and garrisoned the tax collectors. It was ravenous, living inside a sarcophagus where steam engines glaciated into place, where imperial moths televised the impasse: the rickety mammoth confronting the equatorial scarecrow. The sabre-toothed polarity of the breeze exempted each Neanderthal. The price war syncopated, the stellular vistas fallowed. Symphonies climaxed, entire marching bands faced extinction. Then, the great scraping—all the numbness of an ice cube, erasing the pyramids and the harpoonists, the lily pads, the approaching storm.

The poems in are tight, surreal pieces that show an obvious influence from Stuart Ross and Gary Barwin (both of whom are thanked at the back of the collection), and I’m very taken with what Casteels is doing with the sentence and the shape of the prose poem; there are some amazing things at play through these small pieces, from “Trimming the King’s Beard” to “Just Like Grandma Used to Bake” and “The Incredible Hulk Goes Bowling.” One can see the influences of Barwin and Ross through the titles themselves, from the humour and odd-surrealism, but there is something about how the surreal aspects in Casteel’s work is more subdued and subtle, not allowing it to overtake or distract, but as a soft, through-line. His other recent work from the same press is cemantics: minimalist & concrete poetry (Puddles of Sky Press, November 2012), a chapbook that is exactly what it describes, including explorations of the short poem, some of which are entirely Nelson Ball-like in their brevity, including one titled “Rain.” Is this another Stuart Ross influence at play?

There is only one sky
in the sky above our heads
and it is full of holes.

Ottawa ON: Always worth paying attention to is the In/Words Magazine and Press table [see my recent piece on In/Words at Open Book: Ontario here], from recent issues of their journal, recent broadsheets they hand out (which echo the above/ground press “poem” broadsides) and their chapbook series. Of their broadsides, they produced a small handful of new publications for the fair, including new poems by Maria Demare (#5, “Catullus 101”), Amanda Earl (#6, “Trieste”), Jeff Blackman (#7, “Song for David Currie”), JM Francheteau (#8, “The Gelding”), Michelle Duquette (#9, “Hello, Nice to Meet You”) and Selina Boan (#10, “Litany”).

You gather slips of laughter on a breakfast tray. Pestle jars of
seed. Under doorways, balanced atop kettles, stuffing hand
to mouth. Abrade your fingers. Busy yourself with home.

You make scarves, a hat, puffy sweaters. Gathered by years,
set to inaccurate frame after frame you bind hair to wool.
Weave them into one another. A reinvention. Ready Mercy.
We find our baby teeth. Look inside a black film canister.
Listen to it rattle: Remember tooth fairies. Remember when
the house filled with lemon zing, you cooking summer heat,
cherry marmalade and rambling chutney.

One after the other we find your missing parts: Dug up or
stuck under a pot, inside an old rice bag, stitched to a mint
green scarf. Absorbed by puffy garments while we try and fit
you. Maneuver limbs, lift soft arms to the sway of prayer as
you imagine glass elephants and elegant ladies lining
windowsills, tell stories about the queen, tuck self to penny
jars.
You crumble chutney, remove citrus, dissolve to laughter.

From In/Words poet Chris Johnson also came the chapbook Phyllis, I have never spoke your name (In/Words, March 2013), self-described as “one man’s interaction and internalization of months of reading Phyllis Webb and opening his eyes to the inequalities in the world.” This small chapbook, composed and produced for “Feminists and Feminism in Canada / CDNS 3400/WGST 3812 / Sophie Tomas” is an intriguing response, albeit a highly uneven work. I very much like that Johnson is reading the work of Phyllis Webb generally, and that he is responding to Webb’s work through the space of an extended sequence of poems, as a mix of response, homage and exploration: