There is nothing. There is your city.
Right there, the streets out of sight.
Call me a little, pausing funeral; hats off
to the feet set going, the chief element of landscape.
There is nothing. There is the roasted river
when I go, a hand on the universal shoulder
in the face of invisible surveillance, secret dogs,
unaccountable influences. There is nothing
in not ignoring it. What is good? My curiosity
sways on an island with sounds. Things with seas.
Quick and still with wild, inmost, endless,
grand disguises. I am here exactly on this
stage, and there is nothing looming
in the world like snow on the hill in the air. 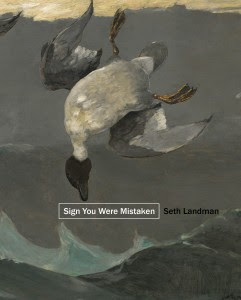 In his first trade poetry collection, Sign You Were Mistaken (Hadley, Massachusetts: Factory Hollow Press, 2013), Northampton, Massachusetts poet Seth Landman has constructed a series of dislocated lyrics, writing one line that does not necessarily follow the previous, and yet they blend together into something beyond the sums of their component parts. Landman’s is a surrealism based in statement and fact, composed out of a sequence of questions that sprinkle through the collection, such as in the poem “ZONE BY ZONE,” asking “Is the lie of the first part of life / apparent to the duration?” It’s as though Landman’s poems disconnect and connect in that space between the lines, somehow composing poems that exist almost entirely inside the mind of the reader, and nowhere near the page.

The title itself, Sign You Were Mistaken, lends itself to more than a couple of questions. Are we meant to read this as a chastisement, informing the sign that it, indeed, was incorrect? The deeper the reader enters the collection, the more it is obvious that it is impossible to know where you might end up, as Landman dismantles basic tenants to unfold a range of possibilities that might have existed otherwise. Landman is both explorer and guide, composing a certainty into the unknown. Through the prose poem and the sentence, Landman’s poems explore perception, referencing dreams, rifling through metaphor, statement, queries and a wide array of uncertainties. “This is my home town,” he writes, in “SOMETHING GOOD HOLIDAY HUMOR,” “and I am pretty much like it. Now that I exist / is true, I guess, but, anyway, I wish you were here.”

Finally there is the map that continues larger than the folds and beyond shadows and hidden space. It is not enough to describe what is not yet rendered, as a brain fills in lines on the sky. It is not enough to lay the space out flat, to describe coastline as formula, as perfect math of impossible love. Home is oxygen: necessary, corrosive. When it feels terrible in the interior, maps call the outside into view. I pour over them for hours, never leaving my kitchen. Finally, I am unfamiliar with my own house. The routes possible from one spot to another increase geometrically. It is not enough to know inside that I might travel anywhere. Great forces are shifting us and there may be nothing we can do. Each day, if you are okay, if you can remain, you remain. Though you may be cold, you may be the cold water surrounding my continent.