Michelle Taransky, Sorry Was In The Woods


HOW TO PICTURE THIS PLACE WHERE

Ash is strong and looks
Like chestnut—A tree is like a steer.
There are many kinds of cuts. Gentle polishing
Exposing the figure of the wood.
You will be surprised when you place
Light wood in hot sand. Watch the wood
Slowly burn. Refinish a found chair
To appear new. 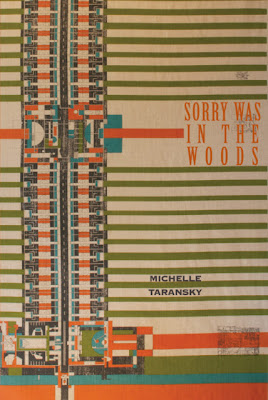 Michelle Taransky’s second trade poetry collection, Sorry Was In The Woods (Richmond CA: Omnidawn, 2013) takes its title from an altered phrase, “Sorry, I was in the woods,” altered previously for the chapbook No, I Will Be In The Woods (Boston MA: Brave Men Press, 2011) [see my review of such here], a title that included a number of the poems in this current collection. As she responds in the interview accompanying the press release, “The title drops off the ‘I’ expected in ‘Sorry, I Was In the Woods’ to question who, or what, should be blamed. ‘Sorry Was In The Woods’ suggests Sorry as a character, suggests being sorry or feeling sorry as a part of being in the woods, suggests an effort to work without the perspective of the ‘I’ or my ‘I’ as anchor.” The author of the previous trade poetry collection, Barn Burned, Then (Omnidawn, 2009), the poems in Sorry Was In The Woods wrap around the abstract of an idea of being lost in the woods, and not seeing the forest, so to speak, for the sake of the trees.

A THOUGHT THE SAME AS THE BOUGH

The rules our tree has found are already
A story that is about trees carved from houses
This rain will not worry the housekeeper
The rules are a stairwell and a series of revolving doors
Do not look towards the staring neighbor
Plan for figuring for facing echo of later
Overstating the work. Where
It’s the piece of the tree growing symbolic, if you let them
Expect woodpeckers to be plastic and panicking from
Sorry, the carpenter is not a painter of the forest.

Accompanied by artwork (including on the cover) by her father, the artist Richard Taransky, the poems in Sorry Was In The Woods echo off each other, repeat without being repetitive, connecting as a forest would, growing in and up, around each other, impossible to separate. Part of this is seen in the thread of poems that run through the entire book, each titled “THE PLANS CAUTION,” writing “Was should, was a foundling was the truth was it found as they found it to hold their gaze in place of a sanctuary,” to “Too many trees wanting to be like bodies” to “Won’t be examples or failures, won’t be / Where when we finish them [.]” Shifting between the perspective of the forest and who might be lost within, the poems map out an increasingly large canvas, a collage of perspectives confusing and conflicting at times, and even disappearing in the darkness of the trees.

SORRY WAITING FOR THE

Permission to consider the view
They left me in their house

Looking like a false alarm. It was then
A fire went unnoticed. I call to see

If the woods is not the world.
Tell me, We cannot picture any worse

Fall. A hundred and four
Years ago, the woodcutter met

A description of how much they can
Tolerate. Sentences that are not told

Apart from those including: Do you know the author?
This is a known picture of that tree.

Worry. The injury was hard on me,
Too, it was. Far too quiet to ask

Questions. They have the whole book
Or nothing. We are counting

Against the grain. We are addicted
To evidence.