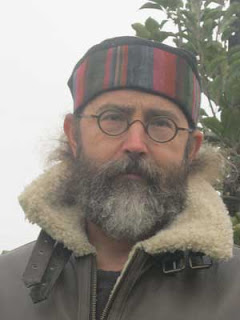 He has published poetry and poetry reviews in a wide range of venues, including The Rumpus, Golden Handcuffs Review, Epoch, Parnassus: Poetry in Review, African American Review, Chicago Review, American Letters & Commentary; and Facture, as well as the anthology The Gertrude Stein Awards In Innovative American Poetry. His critical essays and reviews have appeared in among other places Twentieth Century Literature, American Literature, Shofar, Studies in American Jewish Literature, Sagetrieb, The Cambridge Companion to Modernist Poetry, and The Blackwell Companion to Poetic Genres.

1 - How did your first book change your life? How does your most recent work compare to your previous? How does it feel different?
I don't know how much Anarchy, that first book, "changed" anything. Aside from the inevitable thrill of having a slim, beautifully-designed volume with my own name on it, it gave me a kind of confirmation that there might be a place for my work in the economy (or "society") of book-publishing poets. But it certainly didn't give me a swelled head; nor, if it hadn't come out, would I have stopped writing.

There are poems in Anarchy, which came out in 2003, which date back a decade and a half before. Looking back over that book, I can see some elements – a sense of line-breaks, an overall lyrical movement – that are still present in what I'm writing today. But much of it feels like juvenilia. I like to think that my work has grown harsher, more abrupt, less sentimental over the years; I may be fooling myself.

2 - How did you come to poetry first, as opposed to, say, fiction or non-fiction?
I'd read poetry as long as I can remember, though somehow I managed to bypass the whole genre of "poetry for young people" – I went straight, that is, from Dr. Seuss to William Blake, without any time in Shel Silverstein-land. But it never really ocurred to me to write the stuff, even though I knew from fairly early on that whatever I ended up doing when I grew up, I wanted to "be" a writer.

When I was in junior high and high school, I wrote short stories under the influence of some truly dreadful fantasy authors; when I was an undergraduate, I tried to write a novel under the influence of some truly dreadful "serious" writers (big "ideas," you know). I got impatient with the "furniture-moving" (as John Taggart calls it somewhere) demands of the fiction I was reading: describe a character's features, get her from one place to another, and so forth. When I was 19 or 20 I decided that what I really wanted to do when I wrote was to concentrate on the things I'd always loved in poetry – the sounds of words in combination, the shocks of diction.

3 - How long does it take to start any particular writing project? Does your writing initially come quickly, or is it a slow process? Do first drafts appear looking close to their final shape, or does your work come out of copious notes?
I’m very slow getting started. I make copious notes, though I often have no idea what I’m making them for. Once I get started on a piece, however, I tend to work really fast, raiding my notes relentlessly. And then it gets slow again: I draft quickly, but revise slowly and repeatedly.

4 - Where does a poem usually begin for you? Are you an author of short pieces that end up combining into a larger project, or are you working on a "book" from the very beginning?
I’ve found myself over the last decade and a half working both in shorter and in longer (but modular) forms. The short poems just sort of “come,” they spring out of an image or a phrase or a rhythm in my head. The longer projects – “Anarchy for the U.K.,” Torture Garden – get pretty ferociously planned out before I start writing. Not that I know what will be in the next segment, necessarily, or what direction the whole thing will turn in the next poem, but I’ve plotted out the formal and conceptual constraints of the sequence as a whole more or less from the beginning.

5 - Are public readings part of or counter to your creative process? Are you the sort of writer who enjoys doing readings?
I don’t give a lot of readings, though I enjoy them very much when I do. They don’t really play a role in the compositional process per se.

6 - Do you have any theoretical concerns behind your writing? What kinds of questions are you trying to answer with your work? What do you even think the current questions are?
I think poems are there more to ask than to answer questions. Most of the questions I brood on are old ones, from before “theory” was “theory”; is there a word for “theodicy” that doesn’t necessarily imply deity?

8 - Do you find the process of working with an outside editor difficult or essential (or both)?
In poetry, I’ve found editors useful but not intrusive. Tod Thilleman (Spuyten Duyvil) and Tony Frazer (Shearsman) made useful interventions in the overall shapes of Anarchy and Red Arcadia. As for prose, Herb Leibowitz and Ben Downing, editors at Parnassus: Poetry in Review, pretty much taught me – by dint of merciless cuts, blue-pencilling, sarcastic remarks, and general ruthlessness – how to write prose. I can hardly bear to re-read Louis Zukofsky and the Poetry of Knowledge, the book that came out of my dissertation; The Poem of a Life, on the other hand, is a pretty readable piece of biography.

9 - What is the best piece of advice you've heard (not necessarily given to you directly)?
Pass. As no one will be surprised to learn, I never remember advice.

10 - How easy has it been for you to move between genres (poetry to biography to critical prose)? What do you see as the appeal?
The three kinds of writing seem to me very different things (though there are inevitable bleed-throughs). My critical writing is usually a matter of trying to figure out how things work, and then setting them within larger conceptual contexts: a lot of it is back-engineering, and has that same kind of “tinkering” fascination for me. Biography involves gathering and endlessly assessing great masses of “data,” then trying to weave them into a narrative – which is an altogether different task from criticism. I haven’t had a lot of trouble switching between genres, and the opportunity to do different kinds of writing has always been a real godsend – stuck on one thing, I can try another.

11 - What kind of writing routine do you tend to keep, or do you even have one? How does a typical day (for you) begin?
A typical day for me begins with a pot of coffee and an hour of reading something that isn’t directly related either to what I’m teaching or what I’m writing. (For the past couple of years, the AM wake-up text has been Ruskin.) Days, alas, end up getting eaten by teaching responsibilities and critical commitments. I tend to get most of my poetry written in the evening and over the summer, when I don’t have to worry about grading papers and answering endless e-mails.

12 - When your writing gets stalled, where do you turn or return for (for lack of a better word) inspiration?
When my writing stalls, I don’t try to jump-start it, but just set it aside for a while and do something else – I draw, paint, make some music, hang out with my family, read a novel. Then I got back to it, and pick up the momentum again usually pretty easily.

13 - What fragrance reminds you of home?
Catfish frying. (Tennessee.)

14 - David W. McFadden once said that books come from books, but are there any other forms that influence your work, whether nature, music, science or visual art?
I've always listened to a lot of music. "Bodhrán Song" from Anarchy attempts to capture something about Irish traditional music; the Torture Garden sequence, though there's very little explicitly about music in there, relies very heavily on the compressed, genre-switching forms of John Zorn's Naked City "miniatures." (I simply can't write to music, however – it keeps me from hearing the sounds of my own words.)

I spend a lot of time looking at paintings and drawings, from the high modernist to the lowest Victorian kitsch. I imagine various pictures have made their way into my work with or without me knowing it, but I don't think I have a strong ekphrastic impulse.

15 - What other writers or writings are important for your work, or simply your life outside of your work?
That could be a long list. A short list of more or less contemporaries would include Basil Bunting, Robert Duncan, Charles Olson, Ronald Johnson, Michael Palmer, Gertrude Stein, Susan Howe, Louis Zukofsky, Nathaniel Mackey, Lorine Niedecker, Robert Creeley, Ian Hamilton Finlay, J. H. Prynne, Geoffrey Hill.

16 - What would you like to do that you haven't yet done?
There are a lot of countries I’d like to visit. I’d like to learn to play one instrument well (right now I play about five badly). I’d like to learn to paint well in oils – undercoats, glazing, etc. I’m modest: most of my aspirations are simply things that I need to find the time to tackle properly.

17 - If you could pick any other occupation to attempt, what would it be? Or, alternately, what do you think you would have ended up doing had you not been a writer?
I very much wanted to be an artist when I was young. I sometimes still have dreams about my life as a B-level rock musician.

18 - What made you write, as opposed to doing something else?
Manipulating words was something I did well and very much enjoyed doing, from quite early on. It’s hard to change directions when you’ve found something that works.

19 - What was the last great book you read? What was the last great film?
One of the lovely things about teaching literature full-time is that you get paid to re-read (and talk about) truly great books. I closed last semester by re-reading Virginia Woolf's To the Lighthouse, which for me stands on a novelistic pinnacle that almost no-one else's ever reached, and John Ruskin's Praeterita, a dotty autobiography which includes some of the most beautiful passages of English prose ever written.

As for poetry, I've found myself recently (once again) humbled and blown away by Prynne's Triodes.

20 - What are you currently working on?
Much of my imagination is taken up currently with inchoate plans for a vast critical book on John Ruskin and modernism, which will have precisely 8 readers. But I also have sheaves of notes for shorter critical books – a book on gardening poetics from Marvell to Finlay, a little theoretical book on literary biography.

In terms of poetry – which of course is what you meant by the question – I'm writing shorter poems at my usual glacial pace, and brooding over structural plans for a new sequence whose working title is "Rock Honeycomb."