Of all people of all time in any category james joyce, of all fears of thunder and of dogs, of irregulantcy, of punctuation and of pigeons, of this of a water-window of eyesight, of figures in the night, of the addition of numbers in dreams, of the addition of numbers in waking ten times three, of dots and spheres and the satisfaction of bright tourism, of wormwood and wormweed, of miles, kilometres, and spectacles, of world markets on transversals of the feets of all the birds, of the fantasy of renovated words, of the fact of material barreling nowhere, of horse hooves ebbed and square. 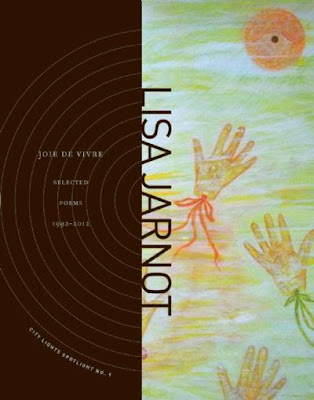 Produced as the ninth in the “City Lights Spotlight Series” is American poet Lisa Jarnot’s volume of selected poems, Joie De Vivre: Selected Poems 1992-2012 (San Francisco CA: City Lights, 2013). Selecting work from her four trade poetry collections—Some Other King of Mission (Providence RI: Burning Deck, 1996), Ring of Fire (Zoland Books, 2001; Salt Publishers, 2003), Black Dog Songs (Chicago Il: Flood Editions, 2003) and Night Scenes (Chicago Il: Flood Editions, 2008)—as well as four newer poems, Joie De Vivre: Selected Poems 1992-2012 presents one hundred pages compiled from a selection of a decade’s worth of her published work. Certainly, a decade isn’t a terribly long time, and this collection has an impressive cohesion, given the stretch of work she had produced during that period, progressing to a series of tighter, more compact lines. The “Spotlight Series” through City Lights is exactly what it claims to be, and not attempting to be any kind of all-inclusive selected, or critical volume of Jarnot’s work, especially with the lack of introduction to provide context to the author and her work (something I always find frustrating when absent from a selected or collected poems).

Jarnot is very much a poet of sentences [see the piece I did on her recently in Jacket2), exploring variations on the line through an appreciation of older forms through the filter of “post-language,” twisting and turning the possibilities of what might be said through what should otherwise be straight. Through a variety of forms, the collection shows the tensile strength of Jarnot’s writing over an extended period, and the mutability of what can be done with the line. A number of the earlier pieces are submerged in southern California, and eventually spread further out, from the remarkable “Hockey Night in Canada” to “Greyhound Ode,” to “The Oldest Door in Britain,” which includes, “O rare Ben Johnson, do you / not know strife?”

SONG OF THE CHINCHILLA