Next time you fumble for a switch, bark
your shins on furniture, wonder vainly what time it is
because of the dark—remember Undark.
Today, thanks to constant laboratory work
everyone can benefit from this
most unusual element. Twenty-three
years ago, radium was unknown. Today,
it serves you safely and surely. You must
ask yourself this: what would you like
to see in the dark? Fishing lures? Clocks?
Buckles on bedroom slippers?! Most assuredly you do.
Undark takes care of the dark, so you don’t have to.
You may ask plainly: does Undark contain real radium?
Of course it does.

From Calgary writer Sandy Pool comes her second poetry collection, Undark (a blewointment book / Nightwood Editions, 2012), a follow-up to Exploding into Night (Guernica Editions, 2009), which was shortlisted for the Governor General’s Award for Poetry. The eighth title in Nightwood’s blewointment book series, she includes this brief note at the opening:

In the early 1900s, thousands of women between the ages of eleven and forty-five were employed painting glow-in-the-dark watch dials for soldiers and civilians in both Canada and the United States. Under the guidance of the paint’s innovator, Sabin Von Sochocky, they kept their brush points sharp by “pointing” the tips of the brushes with their lips.

Several years after leaving the plant, these women developed a variety of mysterious medical conditions, including completely necrosis of the jaw, severe anemia, intense arthritic-like pains, and spontaneous bone fractures in the arms and legs. A few of the former workers became lame when their legs began to shorten. When the women visited doctors, some were told it was syphilis that was causing their symptoms. Sabin Von Shockocky was forced to remove his own thumb due to necrosis, and eventually died of radiation-induced anemia.

Though many women tried to sue the company, the lawsuits were largely unsuccessful. Many of the women died before receiving compensation. The final demise of the US radium dial-painting industry did not come until Canadian production was halted in 1954, and the extraction plants in Belgium shut down in 1960. 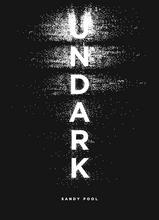 There aren’t that many poetry books that can claim a glow-in-the-dark cover, and one can only presume (and hope) that neither process nor result are the kind of toxicity depicted inside. Pool subtitles her work “An Oratorio,” suggesting the collection is operatic in composition, written expansively and joyously so. Pool’s Undark exists with a cast of characters, “Dramatis Personae,” including Sappho, “Radium Women,” “Chorus,” and the scientist Sabin, writing out very much a score of operatic proportions. “Undark” also appears as a character, reciting and repeating lines from propaganda, as does the character “Hatsepsut: (1508-1458 B.C.) foremost of noble ladies, fifth pharaoh of the eighteenth dynasty of Ancient Egypt.” Undark unfolds and stretches out through a sequence of alternating voices and styles, composing a lyric narrative of fragments, each of which further an accumulation of story. Throughout the collection, the years (which make up either part or all of poem titles) progress as a series of strands from 1905, 1910, 1919, 1916, 1912, 1458 B.C., 1921, 1917, 1458 B.C. and so on, with each page including, instead of page numbers, a countdown of days, hours and minutes to a final demise.

Beyond the range of the human ear
the cemetery clicks into being.

The earth groans. Each one to herself.
Silence. Rather, they whisper.

by the echolocation. Women
are speaking. To have lived

is not enough. They have to
reverberate like elbows

poking through undergrowth.
The rate of pulses rising

To be dead is not enough.
The Doppler shift of history

buries them deeper. Geiger
counter clicks into being.

For her Undark, Pool composes characters, a chorus and lyric asides that merge into an entire performance, providing voice for those who have previously been voiceless. As she writes in her “Notes and Acknowledgments” at the back of the collection, she includes “found text” from Anne Carson’s Fragments of Sappho (2008). Given that one of the characters in the collection is called “Nox”(“a striking dark-featured woman in her late sixties, reminiscent of Marie Curie”), one can’t help but conflate the character slightly with Carson’s subsequent on grief and her brother’s death, Nox (2010), especially given the poems underneath the character’s name, such as “Nox, Lucerne: 1905” or “Nox, Newark: 1919.” This work is a striking performance of grief and compassion, sung as an acknowledgment of those who suffered at the hands of progress. As “Nox” says in the two-line final poem:

Since then, I’ve hated
the dark. I never turn off the lights.