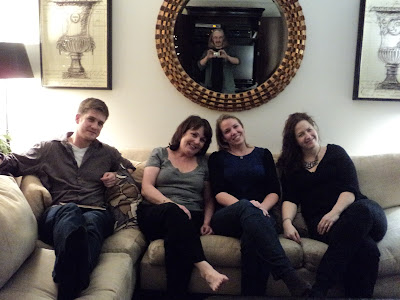 Tuesday, December 25, 2012: We are still learning our combined Christmases, coordinating between my father and sister and her enormous brood (who go around her husband’s family’s schedule), my lovely daughter, and Christine’s parents. This year, a shift in schedule allowed us to spend an evening with her father and his wife in Ottawa on December 22nd, dinner at the Chateau Laurier. Of course, all four of us managed to forget our cameras in other places (which, for good or for ill, prevent any real evidence). But it meant we didn’t have to be in Toronto for 2pm on Christmas Day this year. Relief. Given the 5-plus hour drive from the farm, we barely made it (through a snowstorm, no less) last year.

A drive to Toronto on Christmas day from the farm (via Ottawa, where we returned my daughter home and retrieved Lemonade the cat) isn’t optimal [see my post on such here], but I always remind myself of the story Monty Reid told of when his boys were young, and driving the eight-plus hours on Christmas Day from Drumheller to his mother’s house in Saskatchewan, two young kids in the back. In comparison, ours seems quite reasonable. And although the cat didn’t enjoy the drive, he didn’t necessarily give us any problems, either. He curled up into a quiet, anxious ball.

Ottawa and the farm might have some good snow, but so far, Toronto is rather green. Once we braved Christmas Day traffic along the 401, we had a big dinner at her mother Karin’s house with her great-uncle Bob, cousin Kim, her brother Michael and his lovely fiancé, Alexis [post-dinner photo above: Michael, Karin, Alexis + Christine]. 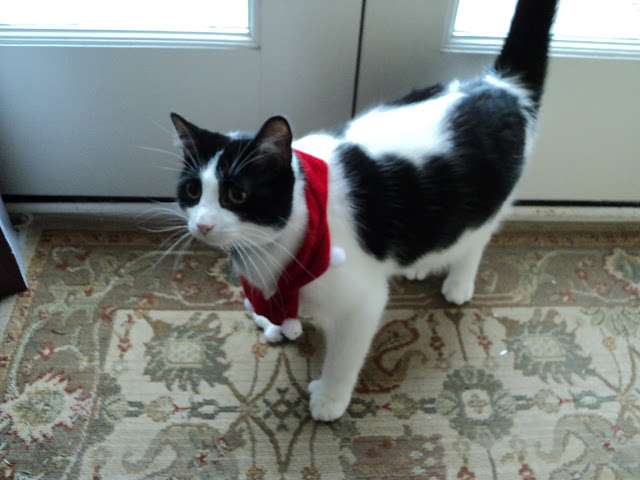 Wednesday, December 26, 2012: Boxing Day, as Toronto threatens snow, at some point. We wake and move quite slowly, having been up rather late with dinner, drinks, stockings, drinks, gifts and more drinks, all while the cat explored the house and was skittish with the strange, new place and all the strangers within. 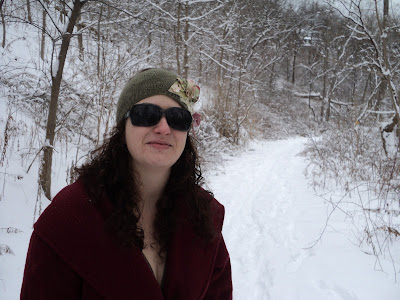 Today, also, I received confirmation on my “Canadian writing” section of the 2013 edition of the annual journal New American Writing. For the sake of space, they’ve cut my section in half, but it will include new work by Rob Budde, Stephen Cain, Margaret Christakos, Trisia Eddy, Jon Paul Fiorentino, Phil Hall, Marilyn Irwin, Nicole Markotić and Andy Weaver (it seems a strange and terrible thing to send out rejections on Boxing Day). The issue should be out later in the spring, and also includes a comparable selection of Mexican poetry edited by Cristina Rivera Garza. In the works for over a year now, I’m very excited to see the completed issue.

We had brunch with her mother, brother and fiancé, and her cousin Jeff, his wife Jen and their two small children before heading off to Burlington to see her friend Kim. Is it possible to enjoy time in Burlington? I keep thinking not, but there you go. 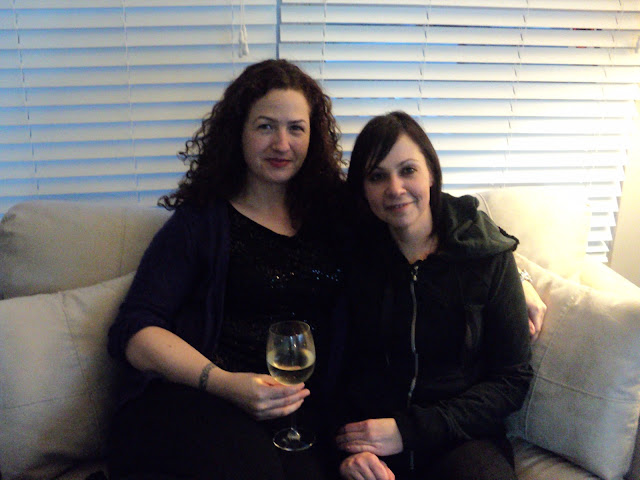 Going through Burlington and Mississauga is to return through Christine’s history, and she has, during various trips, shown me a variety of sites from old schools, houses and workplaces, and the sites of youthful adventures, both good and bad. Most of our comparisons go like this: 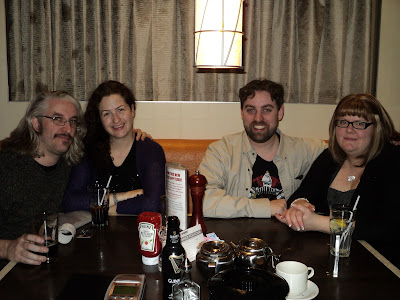 After spending a couple of hours in Burlington with Kim [photo above of Christine and Kim; photo left of myself, Christine, Matt and other Christine] and hearing various stories of youthful hijinks, we drove through blowy snow back to Mississauga, having dinner at a Pickle Barrel with her friend Christine and her husband Matt. Given that the restaurant was five levels, would that be more of a Pickle Silo than an actual Barrel? Mediocre at best, at least the service was good enough. We wandered the mall where Christine apparently had her first date, hundreds of years ago.

And why have we not yet watched this year’s Doctor Who Christmas special? 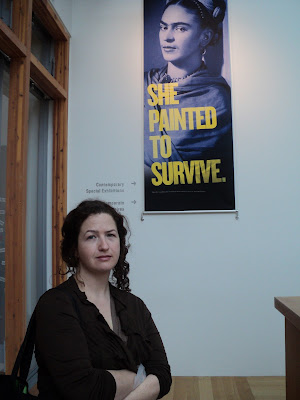 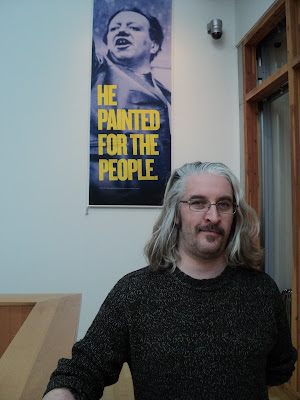 Thursday, December 27, 2012: After a morning of wondering what the cat might get up to in Christine’s mother’s house, Christine and I wandered out into the mounds of snow that fell upon Toronto overnight.

We had tickets to the Art Gallery of Ontario to see their Frieda & Diego: Passion, Politics and Paintings show, which is in the midst of its final week. Christine knew much more of their work than I did, knowing only a bit of Frieda Kahlo and nothing of Diego Rivera, two of Mexico’s most well-known artists. During his lifetime, Rivera was enormously famous, yet Kahlo was the first modern Mexican artist to show work in the Louvre.

It was interesting to see the range of styles the two artists worked with, and the European influences that worked through a number of paintings, from Botticelli’s influence upon a particular Kahlo piece, to the Surrealists and Pablo Picasso, among others. The show presented the two artists as equals, two artists working side-by-side on their numerous projects, including a number they both did that included references to the other (including a great deal of self-portraits). A Christmas present from my lovely wife on our first married Christmas, was she saying I needed to refer to her more in my work? Or me in hers?

The AGO didn’t allow cameras in the exhibit itself, so we had to take photographs in other places, including the small exhibit immediately outside, as a coda to the show, created by a group of Toronto Island artists known as “Shadowland.” 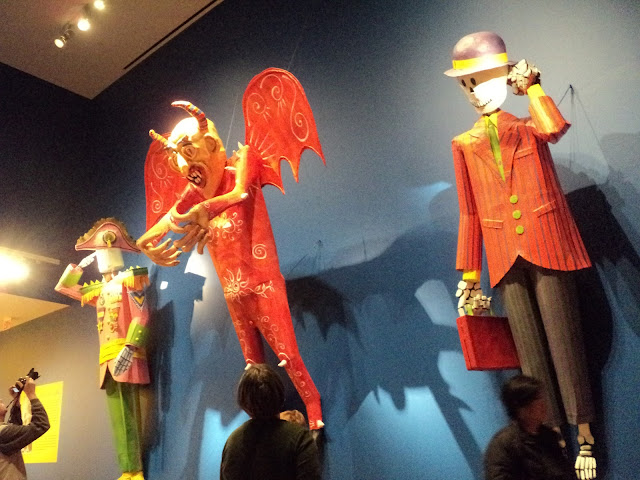 With nearly an hour between finishing the Frieda & Diego show before our lunch reservations at the AGO restaurant, we found another exhibit that excited, Michael Snow: Object of Vision. Michael Snow has always been one of my favourite Canadian artists, existing in a number of realms concurrently. Paired with the presentation of the 2011 Gershon Iskowitz Prize, the exhibit had a number of large sculptural works, many of which require audience participation. What I’ve seen of Snow’s work over the years (including a number of pieces at the National Gallery of Canada), I notice that his work requires, if not outright demands, a particular shift in the viewer’s perception. 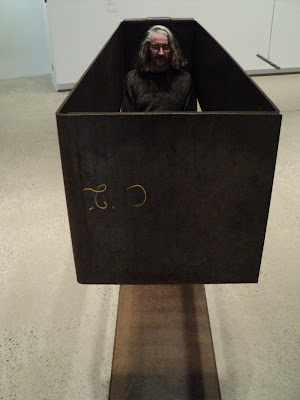 One work, called “Seated Sculpture” (1982), allows the viewer to sit inside. 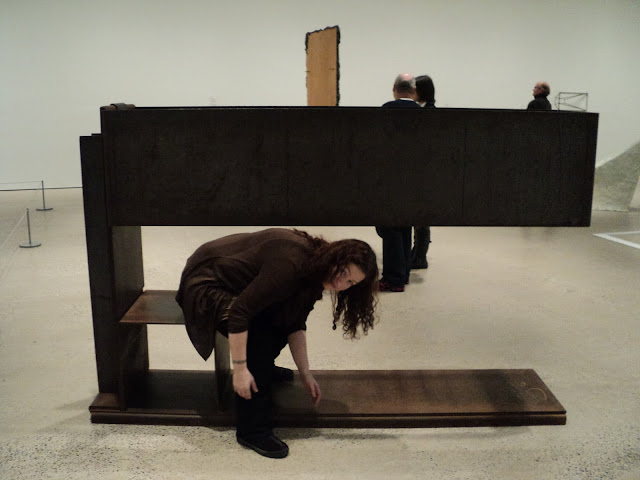 My favourite was the work “Blind,” that I played in for a while. As Snow writes in the “Artist Statement” in the handout:

Several descriptive analogies relating to Blind come to mind: it’s like a three-dimensional cross-hatched drawing, an object that monumentalizes fading in and fading out, and in another film-related resemblance, it’s like a zoom. The spectator experiences optically what is called “depth of field” in reference to focusing with the camera lens at different planes. Viewing it requires the spectator to focus; movie effects happen as the spectator moves.

I stood inside for a while, taking pictures of Christine wandering through other parts of the gallery. 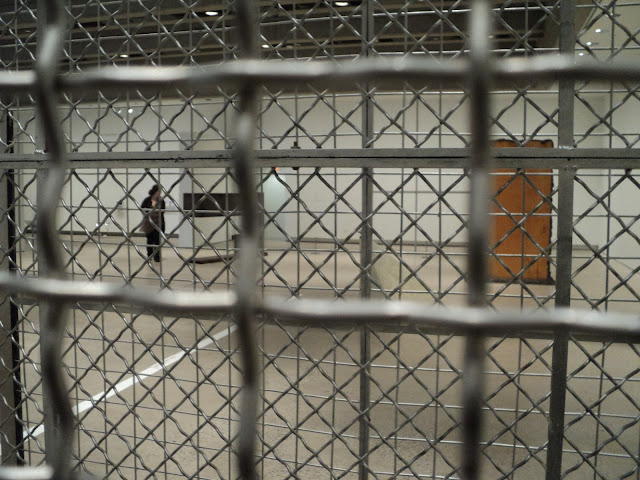 Later on, Christine (at my request) took a picture of me inside the work. Wouldn’t this make the best author photo ever? For our collaborative project [see a fragment of such here], I’d love for a portrait of each of us inside the work, her on the front and I on the back (perhaps). Do you think such a thing would be difficult to achieve, permission-wise? I’d hope not. 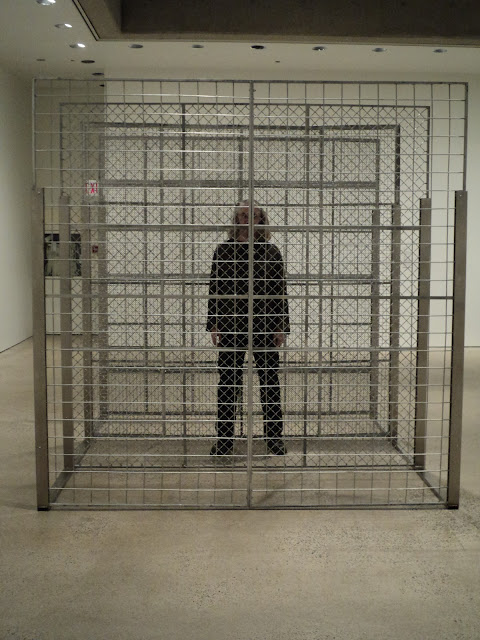 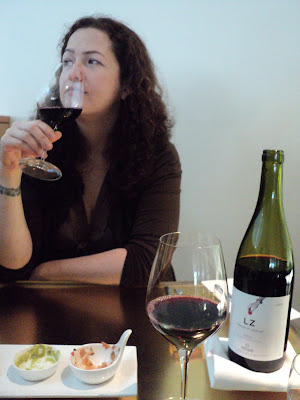 From there, we had lunch in the restaurant, a set-lunch-menu with a Mexican-Spanish theme (to go along with the exhibit, obviously), and a Spanish wine as well. Magnificent!

Post-AGO, we hit a bookstore and spent much money. I picked up some trades of Avengers, Fables, Krazy + Ignatz, and some issues of McSweeney’s and Granta. Had we been here a bit longer, we might have had time to get a bit of writing done [as we did last year], but unfortunately, not. At least Saturday, again, will be a work day.

And then back to her mother’s, exhausted, to a quiet, quiet evening.

Friday, December 28, 2012: We looked at the snow, and we wondered. And we still drove home, due to the Peter F Yacht Club Christmas party/reading/regatta the following night.