A neighbourhood
On the verge

urban frontiers
named and renamed
new pioneers
on the skids

and neighbourhood shock therapy
right to the heart
heart of the city.

in a cart
down the alley to the park.

Where things where once made
When an hour was material, at

hand, demands
for what you never had

“shiny shiny boots
of leather” lean against
a dumpster.

Hours add up to space
to live per square foot

“I am tired, I am weary”
Worried to kiss the boot. (Jeff Derksen, “from The Vestiges”)

Given that I’m in the midst of Lisa Jarnot’s biography of Robert Duncan (having read the Jack Spicer biography a couple of years back), I’m intrigued to see a feature on American artist Fran Herndon in the new issue of The Capilano Review (3.18; Fall 2012). As poet, fiction writer and Spicer biographer Kevin Killian writes in his piece “Fran Herndon” (a piece originally prepared for an exhibition on her work at Altman Siegel Gallery, SanFrancisco, September 8, 2011):

Born in Oklahoma in 1929, of Native American origin, Fran Herndon escaped to Europe just as Senator Joseph McCarthy turned this country upside down. The U.S., she told us recently, was then “no place for a brown face.” In France she met and married the teacher and writer James Herndon, and the couple moved to San Francisco in 1957. (The first of their two sons, Jay, was born the same year.) Shortly after arriving in the Bay Area she met four friends of her husband’s: Jack Spicer, Robin Blaser, Robert Duncan and Jess-the brilliant crew that had invented the Berkeley Renaissance ten years earlier, artists now all working at the height of their poetic powers in a highly charged urban bohemia.
Fran Herndon became most deeply involved with the most irascible of them all. From the very first evening that they had spent time together, Jack Spicer (1925-1965) seemed to see something unusual, something vivid in Fran that she had not seen herself. It was as if he were establishing a person, the way he created a poem, out of the raw materials she presented, and for a long time she did not know what it was he wanted her to be. Fran was mystified but elated by a power that Jack saw hidden inside her demure, polite social persona. He knew before she did that she would never be completely satisfied with the roles of mother and housewife. 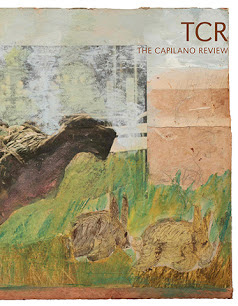 The issue includes this piece by Killian, a piece, “Fran Herndon and Her Circle” by Keith Wallace, and a folio or two of Herndon’s work, including a piece selected for the cover. This issue of The Capilano Review is unique for its series of groupings, from the feature on Herndon, a feature on Bay Area Poets by Roger Farr, a feature on “Tom Cone and The Opera Project,” and a feature on photographer Marian Penner Bancroft, as well as new writing from Jeff Derksen, Jeff Carpenter, Jane Sprague, Sean Howard and George Stanley. In his piece, “Tom Cone and The Opera Project,” Colin Browne describes the reasoning behind the commission of three pieces that appear in the issue: Jenny Penberthy’s libretto “La crise: un drama d’Ubu Moi to Toi,” Dave Deveau’s “Unnatural,” and Browne’s own “The Oval.” Browne explains:

Tom and his wife Karen Matthews had once before addressed the timidity of Vancouver’s musical institutions by creating, in 2004, with their colleague David Pay, a successful series in their living room that featured the commissioning of new songs. Called Song Room, it brought together Vancouver composers, writers and musicians twice a year to experiment with exciting and often risky collaborations. It brought new audiences to new music, and undertook to further develop these audiences by casting an ever-wider net. The “Collaborations” issue of The Capilano Review (Winter 2008) featured eleven Song Room collaborations. In the fall of 2010, Tom and Karen took the step of creating a new series called The Opera Project for the purpose of creating ten-minute operas. They commissioned four composers and four writers (Tom being among them, for which we can be grateful), and in May of 2011, they unveiled the new works in their home, including Tom’s Love Thy Neighbour with music composed by Edward Top, the Vancouver Symphony Orchestra’s composer-in-residence.
The rules for The Opera Project commission are simple. The work may be no longer than ten minutes, there’s not much room for acting, costumes or props, each project may feature up to four singers and four instrumentalists, and, as with all Cone & Matthews events, the money collected at the door goes directly to the performers. Tom insisted that the words had to be audible and comprehensible, and was firm in his conviction that the writer’s libretto is equal in value to the composer’s score, a surprisingly radical proposition in opera circles.

The richness and variety of the issue is impressive, as is the breadth and depth of engagement with a number of communities in and around their immediate Vancouver. Farr’s feature, for example, “Six Bay Area Poets with Varying Degrees of Affiliation with the 95 Cent Durruti School of Social Poetics,” includes work by Brian Ang, JasperBernes, David Buuck, Melissa Mack, Wendy Trevino and Jeanine Webb, exploring an extension of concerns held in the poetry and poetics of the Kootenay School of Writing. His introduction reads:

In 2010, Joshua Clover and Juliana Spahr called for an assembly in Berkeley—“the 95 Cent Skool”—of writers whose work was in some way informed by social struggle, emphasizing in particular self-identified Marxist and anarchist tendencies in contemporary poetics. As they wrote in their initial call:

Our corners in these six days begin with the assumption that poetry has a role to play in the larger political and intellectual sphere of contemporary culture, and that any poetry which subtracts itself from such engagements is no longer of interest. ‘Social poetics’ is not a settled category, and does not necessarily refer to poetry espousing a social vision. It simply assumes that the basis of poetry is not personal expression or the truth of any given individual, but shared social struggle.

In response to this call, more than 20 people turned up from Canada, the US (including Hawaii), and the UK, to discuss the tensions, variants, and possibilities of a newly engaged social poetics. No consensus was reached and a very good time was had.
The following year, a second, smaller gathering took place, this time under the banner of the “Durruti Free Skool” (provocatively titled after the infamous Spanish anarchist-militant Buenaventura Durruti). A full account of this second session, by Brian Ang, can be found online at Lana Turner.
In this section of TCR, then, I have collected work by some of the Bay Area-based writers I met at the gatherings and whose work I admire. While I would not want to make the reductivist claim that the work in this section elaborates or represents the concerns that surfaced over the course of the two assemblies, it is worth noting that many of the Bay Area participants and organizers later became active in the Oakland Commune, a “zone of opacity” that completely blew up—in a good way—during the Occupy Wall Street actions of 2011. Certainly, that historical moment—“the first of many last resorts”—materializes here.

The argument of politics and social concerns in poetry has been a long one, and engaged with in a way on Canada’s west coast in ways that haven’t really been explored anywhere else in the country, with the same range and depth. The first section of David Buuck’s poem in that same feature, “from We Do the Polis in Different Voices,” reads:

How to make
nothing happen

there in that
negation

where we want
to have begun

An interesting development over the past year or two has been in how The Capilano Review has been expanding their web content, often accompanying and expanding upon work featured in their print journal, as well as bringing in a series of guest-bloggers. Recent bloggers have included Barry McKinnon, Kim Minkus, Lisa Robertson, George Bowering, and even myself.
Posted by rob mclennan at 9:01 AM
Labels: Colin Browne, David Buuck, Fran Herndon, George Stanley, Jane Sprague, Jeff Carpenter, Jeff Derksen, Kevin Killian, literary journals, Roger Farr, Sean Howard, The Capilano Review