One day, my father and I were on the rear balcony playing (I recall that families with few possession spent most of their time at the back of the house, mainly in the kitchen), I was sitting on the ground and he on a small wooden bench of the kind that was commonplace then and considered indispensable, especially to the women of the household, who sat there to do their sewing. Standing behind me, watching the game, was António Barata. My father was not a man to let his son beat him and so, implacably, and taking advantage of my limited skill, he scored goal after goal. Barata, as an officer in the Criminal Investigation Department, must have had plenty of training in different ways of putting psychological pressure on the detainees in his care, but clearly thought it a good idea to use that occasion to get in a little extra practice. He kept nudging me with his foot from behind and saying: “You’re losing, you’re losing.” The boy I was at the time put up for as long as he could with the father who kept winning and the neighbor who kept taunting him, but eventually, in desperation, he struck Barata on the foot (well, “struck” is too strong a word to describe a blow dealt by a mere child) and at the same time vented his frustration by using the few words that could be spoken in such circumstances without offending anyone: “Stop it!” Barely were the words out of his mouth, however, than his all-conquering father slapped him twice across the face, so hard that the blow sent him rolling across the concrete floor of the balcony. Neither father nor neighbor, both of whom were policemen and honest guardians of public order, ever understood that they had shown a lack of respect for someone who could have a lot of growing up to do before he could finally tell this sad tale. His and theirs. 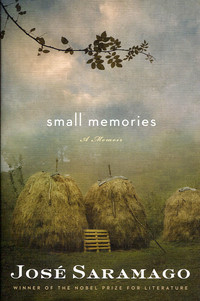 Lately I’ve been reading small memories: A Memoir (trans. Margaret Jull Costa, 2009) by the late Nobel laureate José Saramago. For whatever reason, I’ve long been more attracted to the non-fiction of certain writers than to the novels they’re known for, having spent the past few months slowly working through collections of essays by Siri Hustvedt, ZadieSmith [see my review of such here], Salman Rushdie and Orhan Pamuk, and that most recent Paul Auster memoir [see my review of such here]. I’m not entirely certain why, apart from wanting to know, perhaps, a story closer to what might actually have been “true.” What does it matter?

Despite my interest in fiction, I’ve always gravitated to the non-fiction pieces in Granta first, well before any of the fiction. Another recent discovery was the non-fiction anthology mortification: writer’s stories of their public shame, ed. Robin Robertson (2003), with numerous stories by Margaret Atwoood, Michael Ondaatje, Simon Armitage, Margaret Drabble, A.L. Kennedy and Niall Griffiths, any of which would make any working writer feel less foolish and lost in their work and experiences. Perhaps it is a matter of wanting fact over style, to understand something more direct about the story being told, and he or she who might be telling it.

The late Saramago is one of those authors that Stephen Brockwell keeps recommending to me, and I haven’t read nearly as much as I should by Saramago, having only read the novel Blindness, a gift from my ex-wife somewhere in the 1990s (I have yet to see the movie version). Once opened, the book was impossible to put down. I was fortunate enough to hear Saramago read in Portugese (unfortunately, the translating-machines weren’t working) when he came through town a few years ago, thanks to the Ottawa international writers festival, and his presence was quiet, but striking.

small memories: A Memoir is exactly that, Saramago writing openly about his younger life, sketching out recollections as they come to him, in a loosely-chronological order, shifting somewhat as the story requires. There are even tales he tells that he later corrects, after receiving new information, a correction or a new realization. Just how much can anyone trust their own memory after decades? In here, we are told of his grandparents, the village of Azinhaga and Lisbon, his first romantic stirrings and simple encounters, his first encounters with literature, and witness the death of Saramago’s elder brother when the author is but a toddler. As a writer, one of the aspects of the memoir I found utterly fascinating was in the way he constructs his sentences (a slight misnomer, given that the book is translated into English), the stretched-out sentences riddled with small asides and complex twists, unending winding roads one might suspect would never end, and yet, still cohere. The tales of small memories: A Memoir are less held together with fact than with memory, even one the author himself doesn’t entirely trust, but hold together in their own way to tell the story of how he arrived to that place where he would begin to write, and evolve into the man he eventually became. Once the stories begin, you might be able to put the rest together yourself.