her head-top smelling
like an experiment in communal living.
In 2016 we will begin paying more
in benefits than we collect in taxes

leaking through to the secure side of
a compact between generations
prepared especially for Kate Schapira. (“The Beginnings of Generosity”) 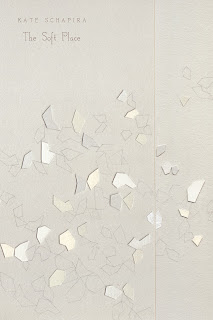 In her fourth trade poetry collection, The Soft Place (Denver CO: Horse Less Press, 2012), Providence, Rhode Island poet Kate Schapira composes four poem/sections out of notes and fragments that accumulate into a work that feels larger than the scope of the current trade work.

There is something about her poetry that feels larger than the mere shape of itself, akin to works such as bpNichol’s The Martyrology, Robert Kroetsch’s Completed Field Notes, or more contemporary works, such as the poetry of Emily Carr, and yet, without having seen any of her previous works, it becomes difficult to do anything but throw out conjecture. Just what is it she is building?

Composed in four poem-sections—“The Beginnings of Generosity,” “Suture Sutras,” “Open Storage” and “Border Portal”—there is a meditational quality to the writing in The Soft Place, a thoughtful movement that works equally slow and quick. As she writes in the first section:

Schapira’s is a wide canvas, and this collection feels merely a part of something ongoing, gives the appearance of writing as a daily practice, akin to bpNichol’s “poem as long as a life.” Schapira stitches, in the finest sense, a quilt composed of fragments, a structure most obvious in the third section. The travel-section, “Open Storage,” unlike the other sections, is made up of individually-titled poems (as opposed to a poem/section of accumulated fragments), each of which repeat and wrap around each other in a compelling cadence of repetition. Poems in this section include “Train Notes (Expanded),” “Ocean, Air and Sickness: Day 1,” “Safety Fact 1,” “Ocean, Air and Sickness: Day 2,” “Safety Fact 2,” and multiple “Heirloom Notes (Expanded),” among others.

Schapira manages to connect her work back to itself without falling into mockery, equally managing to extend the scope of the individual poems, and the collection as a whole, most of which does feel as though sketched out during travel, with shades of the epistolary. When comparing this collection to another of the press’ titles, Richard Froude’s Fabric (Horse Less Press, 2011) [see my review of such here], it gives the impression that the editors of Horse Less Press might prefer quality poetry manuscripts constructed out of long, thoughtful, meditative fragments. How do such works get constructed? I am interested in pursuing her other works, to attempt to figure out.

“I want us to be like that 95-year-old oven,” you say. Big cement
lions on both sides of an overpass bridge. Flat park and muddy
river below; fog and hillside, tangle and ivy, dark twilight, cold
damp air. I wrote this down carefully. I brought it to you.