Why the term “conceptual” now? Why not come up with a new term, one which is actually new? And yet the term “conceptual,” because of its long association with visual arts, merits a wider gaze than it has been given in relation to writing. In other words, it is not a term which can belong to a select few, or be defined too narrowly, at least not at this point in time. The term “conceptual writing” warrants a period of discovery and describes, as illustrated in this book, a wide proliferation of forms and approaches. This anthology is hopefully the beginning of opening such a passage of debate and conversation. The fact is, that the term “conceptual writing,” for better and for worse, has thus far often been employed to describe a set of writing practices which seem, nonsensically, to preclude particular content. Not coincidentally, this content is often chosen by women. In this collection of work by women a reader may find that process and restraint driven writing is often expressive and intellectual, and that the assumption of a dualistic paradigm which claims that conceptual writing creates only ego-less works is actually another false construction. While looking at the work of women in this collection, it is evident that in conceptual writing methodologies do not dictate or predict the writing that follows, nor is methodology the only indicator of conceptual writing. (Laynie Browne, “A Conceptual Assemblage An Introduction”) 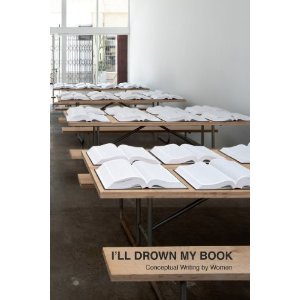 Perhaps one of the most highly anticipated anthologies of recent memory is the new I’ll Drown My Book: Conceptual Writing by Women (Los Angeles CA: Les Figues, 2012), edited by Caroline Bergvall, Laynie Browne, Teresa Carmody and Vanessa Place. The editors include the work of “64 women from 10 countries, with contributors’ responses to the question—What is conceptual writing?—appearing alongside their work.” This collection comes on the heels of some fiery debate, including the founding of both the VIDA (Women in Literary Arts) and CWILA (Canadian Women in Literary Arts) organizations, working for the sake of an increased dialogue with and about women writing and writers. In terms of Canadian writing, also, this new collection follows some other important works in a similar field, including Nate Dorward’s ANTIOPHONES: Essays on Women’s Experimental Poetries in Canada (Toronto ON: The Gig, 2008), Kate Eichhorn and Heather Milne’s Prismatic Publics: Innovative Canadian Women’s Poetry and Poetics (Toronto ON: Coach House Books, 2009) and Eichhorn and Barbara Godard’s guest-edited “Beyond Stasis: Poetics and Feminism Today” issue of Open Letter (Thirteenth Series, Number 9, Summer 2009). It seems baffling that still, after enough examples have been forwarded of women writers over the years, why does so much of it still get overlooked? Why is there still such a disconnect? Only recently, Ottawa poet, publisher and bookseller jwcurry lamented the list of Canadian critical studies on small press publishing, visual/concrete poetry and women’s works that have nearly erased the contributions of Vancouver’s Judith Copithorne, said to be the first woman publisher in British Columbia, producing works alongside Gerry Gilbert and bill bissett. Despite the fact that her work has been ongoing, with her first pieces published back in the 1950s, the critical silence is deafening.

Between the precious and the radical
Between the strategic and the tragic
Radiant and strained
Fountain is a folding fan of water.
The pressure of errant streams
massages precious togetherness open.
From the fissure clear water issues
as though from a purse
between clasps of discourses
and their embroidered surfaces

Between the institutions of pairs

With their contributions of sixty-four writers from ten countries, one might suspect that those contained within might all be aware of each others’ work, but borders are stronger than one might imagine, even with the added bonus of the internet, and journals such as Jacket magazine and Jacket2. The range of writers are enough that those in the anthology might even be introduced to someo f the others within for the first time, or for the first substantial time. The collection is organized in sections—1. Process (Constraint, Mimicry, Mediation, Translative, Versioning); 2. Structure (Appropriation, Erasure, Constraint, Formula, Pattern, Palimpsest); 3. Matter (Baroque, Hybrid, Generative, Corporeal, Dissensual); 4. Event (Documenta, Investigative, Intertextual, Historicism, Speculative); and 5. Concluding Remarks. I’ll Drown My Book: Conceptual Writing by Women is an important book in many ways, in no small part for the lively range of statements included by each author. As Sarah Dowling opens her statement, included after a couple of pages of her visual works: “I come to conceptual writing with a scholarly interested in description.”  In her statement, “Some Ambivalence about the term ‘Conceptual Poetry,’” Rosmarie Waldrop writes: “By these criteria, I am certainly not a conceptual writer.” She opens her piece, writing:

When visual artists go to conceptual work they stress the part of their process that depends least on the nature of their medium, which is sensuous. They in fact leave their medium and cross over into language.
For writers, the situation is very different. The concept is an essential part of the word, hence the very nature, the very medium of writing—its bane, many would say, for it makes the language arts the most abstract, the least sensuous of the arts. I, like most poets, work at subverting the word’s transparency for its concept (loved by philosophers and other discursive writers) by stressing the “body” of the word, its sound, sometimes its shape. The literary movement that actually corresponds to conceptual art is concrete poetry, which tries to cross over into the visual.

On the other hand, Laura Moriarty includes as her sole contribution, the piece “The Writing Practice Formerly Known As,” which discusses the difficulty and complication of naming:

Experimentality in writing is universally acknowledged to comprise innovation, pushing the limits of literary genres or combining genres. These days, there seems to be an impulse to name experimental writing practice, perhaps from a desire to distinguish contemporary writing from older innovative practices or what could be called traditional writing. […] I recently participated in a conference that was called “post_moot” by its organizers, cris cheek, Cathy Wagner and Bill Howe. They used the term “post_moot” rather than employ the dreaded “post language” or “post” anything, as well as to emphasize the communality of current practice. “Moot” means “meeting” with the additional senses of “discussion” and “judging.” Many writers prefer not to characterize their writing or label it at all.

As Laynie Browne writes in her introduction (Caroline Bergvall includes one as well, and Vanessa Place contributes an “Afterword”): “The writers in this collection are not bound by a singular aesthetic intent, but rather by practices which, when considered side by side, form a mosaic of possibilities which resonate as a whole, perhaps because of a commitment to common concerns which span many practices, languages and cultures.” What is fascinating about having two distinct introductions (three with the “Afterword”) to the anthology is that it highlights the difficulties with wanting to place the collection in a singular context, as well as the complication of such a loaded term as “conceptual poetry”; instead, this collection holds a fluidity of approaches, styles, contradictions and geographies, existing as an anthology-as-container, and containing multitudes. The approach feels entirely appropriate for the concept and the materials, attempting to articulate a complicated and contradictory idea, instead of arbitrarily fixing a moving target. To define in almost any way would be to reduce, and therefore negate, that with which they are working to engage. I’ll Drown My Book: Conceptual Writing by Women is an ambitious work, large, rich and slightly contradictory, and entirely brilliant, and something that anyone interested in contemporary writing should immediately attempt to get their hands upon. In her “Afterword,” co-editor Vanessa Place speaks of the parable of the five blind men and the elephant, and their incomplete descriptions.

I have previously identified many forms of conceptualism, ranging from the pure to the baroque. These are matters of form. I have come to consider conceptualism, qua conceptualism, that is, as writing that does not self-interpret, is not self-reflexive, at least not on the page. In other words, writing in which the content does not dictate the content: what appears on the surface of the page is pure textual materiality, no more (and often much less) than what you see on the surface of the page. Conversely, in the way of positive and negative space, conceptualism is also writing in which the context is the primary locus of meaning-making.