Into the courtyard sweeps another nun, followed by a line of children. They walk with their index fingers poised over their lips. Each child wears rain gear designed to look like an animal or insect: tiger, fish, ladybug, duck. The processional halts at Sister Whoever, whose name turns out to be Helena. Helena introduces me to Sister Charlene, who removes her finger just long enough to whisper hello. Sister Helena explains what I will be doing at Saint Teresa. I sense movement near me and look down into the big browns of a little boy. He has a frog rain slicker and a bowl haircut that went out in, what, 1984?
“Meow,” he says.
“I’m afraid you’ve received wrong information.” (“Carry Me Home, Sisters of Saint Joseph”) 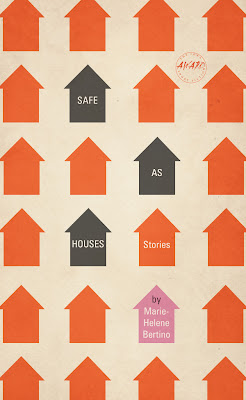 Lately I’ve been reading American writer Marie-Helene Bertino’s [see her 12 or 20 questions here] first collection of short fiction, Safe as Houses (University of Iowa Press, 2012), published as the result of the manuscript having won The Iowa Short Fiction Award. In these eight stories, Bertino manages an absurd tension and strange impossibilities, writing as tight as a spring. In one story, her narrator is (supposedly) an alien with a mundane office job, reporting home on what happens in the lives of earthlings. In another, she writes a narrator who brings Bob Dylan home for Thanksgiving dinner, attempting to appease a brother who refuses just about everything. In the final story, “Carry Me Home, Sisters of Saint Joseph,” we encounter Ruby, who enters a nunnery in order to get over a cowboy boyfriend, is asked to talk to tomato plants and sees how unlucky some five year olds could possibly be. Ruby’s story moves through shades of the fantastic in the incredibly ordinary, reminiscent of former Toronto writer Eliza Clark’s incredible first novel, Miss You Like Crazy (1994), both writing out the strange and ordinary and ridiculous. These stories are sharp, cutthroat and even slightly confusing, writing out multiple worlds in the short space of a single collection, each tale as short and compact as the story requires. In my mind, the most striking story is the first, “Free Ham,” as the narrator relates the confusion and absurdity immediately following the loss of their house in a fire. The opening of the story reads: