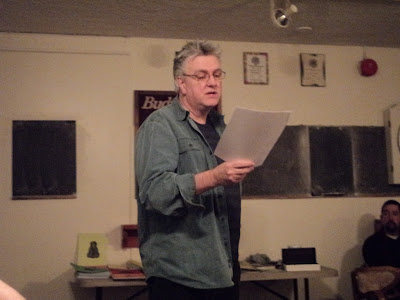 Another year come and gone. Here’s a photo from our recent Peter F Yacht Club Christmas party/reading/regatta of Roland Prevost [see my full report on such here]. And have you subscribed to above/ground press yet for its 20th year? Forthcoming chapbooks have already been confirmed by Helen Hajnoczky, Abby Paige, Joshua Marie Wilkinson and Abby Paige. Just what else might the new year bring?

Since I’ve done my ‘best big thing’self-interview, two of the five I tagged have posted their own: Stephen Cain and Michael Bryson. Looking forward to seeing what the other three (eventually) have to say. And watch for these upcoming events.

Hamilton ON/Schenectady NY: Another small chapbook from Gary Barwin’s serif of nottingham is American poet NF Huth’s 3 Words (2011). In these nine poems, there is such a lovely quality of repetition and chant, composing poems underneath three little words nearly as an experiment in riffing and/or word association. The poems read sharp and quick, embracing tangents and qualities of sound, and it’s impossible to know where the poems might end up. I am fascinated by what she is doing.

Her eyes follow the swarm heavy with rain.
When silence swarms she fills the space between.
Silence is never filled.
Rain heavies the bees. They swell and drop from her mouth.

The clock signals some ends with sound.
A final sound is a puddle of bees ticking on the floor.
Her meter is bursts of three.
Her meter makes constant ends.

London ON: Karen Schindler’s Baseline Press has been producing some intriguing (and quite attractive) limited edition chapbooks over the past year or so [see my review of the recent Gil McElroy chapbook here], and the most recent batch of short works includes Gabriel Wainio-Théberge’s Small Hallows (2012) and Blair Trewartha’s Porcupine Burning (2012). Gabriel Wainio-Théberge is a graduate of Ottawa’s Canterbury High School, and Small Hallows appears to be his first published chapbook.

What is left to say about autumn
and should it be said
before autumn begins? Will the words
curl up and go brown at the edges,
fall like yellow leaves to the ground
while the trees are still green
(in no particular order)?
Will they be gnawed at by insects,
tiptoed on by spiders?
Will the trees smoulder, die
and not be transfigured?
Omen of autumn: lantern leaves
glow yellow in a sulfurous sunset.
Acid of August. A single worried streetlight
watches it eat the night, sleeps
as it fades the day, blinks awake to find
the evening bubbling over
like a science-fair volcano –
day and night reacting,
burning the edges of the leaves, while inside
I wait for the colours to settle.

Largely autobiographical, Wainio-Théberge sketches a series of lyric narrative poems, and the strong narrative impulse throughout is enough that I wonder about his choice for poetry over prose. Why not compose short stories? Still, what there is in his poems does sharpen once the narrative begins to fall away and the image clears, composing into a series of fragments. And yet, he uses similes far, far too often. Why does everything has to be “like” a thing? Why can’t he simply describe “thing”? There are some moments here and there, most of which are still buried beneath youth and inexperience. I would be interested to see where his writing is in, say, another five years, or ten.

Wndryn the rain. A season’s baptism
plasters leaves to the asphalt. Wndryn.

The asphalt sweats out its heart. A clod of cold
slips down its road throat. Something moves.

The leaves are transfixed. A twisting
inside the red branch, a twisting of something green.

The asphalt chokes, but it is
saying something – Wndryn.

Wndryn among the pumpkin fields. The corkscrew
of the cut stalk, cracking,

and energy being released
through hairline cracks in pumpkinstalks and clouds.

Where does it go? Rainwater
is easy to scatter. Draw a picture.

Blair Trewartha’s Porcupine Burning tells the story of an event, as he writes to open the small collection:

On July 11, 1911, the gold rush town of Porcupine started to burn. Citizens fled to the lake, or perished in the buildings they had erected and the bush they prospected. The two-year-old town was cleared right down to the rock by dawn. The next day, survivors set up tents and took stock of what remained. With the dense bush now completely barren, it took only two months for Porcupine to return to a booming mining settlement.

Much like Wainio-Théberge’s collection, Trewartha’s Porcupine Burning composes a sequence of narratives, linked through a shared, historical event. He writes poems amid and between the actions of historical record, including “Porcupine, Burning,” “Vigil” and “Recovery.” Honestly, the poems actually become more compelling once the story is told and nearly out of the way:

In the lake, I am heavy stone.

until I roll effortlessly, vertebrae separating,
spine snapping into alignment.

I used to call you a lake carp, when we’d fight.
Your slick skin maneuvering through the reeds

like a ghost, jagged rows of teeth
hidden beneath bed sheets.

Even your bite I miss, that sudden punch of breath
at the moment of puncture. The injection of pulse.

Anything is better than this—a stillness more solid
than shore. Your silence an undertow I waltz with blindly.

I’m rarely fond of the poem or poem-sequence reciting history (whether an event or figure), since so many simply regurgitate facts already-known, which make me wonder what the purpose is; why not go straight to the history books instead? It’s a difficult form, certainly, and one of the few that have worked might include Daphne Marlatt’s Vancouver Poems (1972) or Steveston (1977), or even George Bowering’s George, Vancouver (1972). Just what is it about the form that compels?
Posted by rob mclennan at 9:01 AM
Labels: Baseline Press, Blair Trewartha, Gabriel Wainio-Theberge, Gary Barwin, NF Huth, ongoing notes, Roland Prevost, serif of nottingham, The Peter F. Yacht Club