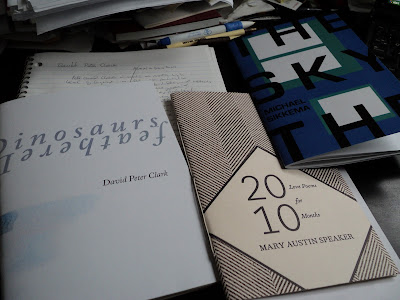 I might not have been able to attend the recent Meet the Presses fair in Toronto, but Gary Barwin was good enough to pass along a couple of items, which I appreciate immensely. Why is it so difficult to get copies of Canadian-produced small press chapbooks for potential review?

Keep an eye out for a couple of events over at The Factory Reading Series, including Shannon Maguire and Roland Prevost launching new above/ground press titles on December 15th (with special guest Craig Calhoun), and the Peter F Yacht Club Christmas party/reading/regatta on the 29th! For other readings in and about Ottawa, as always, check the listings at Bywords.ca.

Hamilton ON/Grand Rapids MI: I am very taken with the new chapbook that Gary Barwin recently produced by American poet Michael Sikkema, The Sky The (Hamilton ON: serif of nottingham, 2012). There is such a fine sense of incompleteness to the poems, polished, finished poems that end before they really end.

how to explain your politics at a party

since I got all nest-faced
I’ve been trying

out the POV
of a damselfly & avoiding

the chapter on cannibalism

Through twenty-seven short poems (none longer than a page), there is a sharpness here, an energy that might even be called restrained, utilized in the slyest way. An interesting feature is the chorus of poems that run throughout the collection, nearly every second piece titled “blr,” without seeming connection to any that have come before. What might it even stand for? The informal thread might simply exist as a catch-all, an umbrella under which a poem can accumulate, or swirl around a central image.

In a day a costume
change

In the headlines
zombie hammer

and Hasselhoff
crabs. In the other

a minute I’ll tell you
some scientists

made a beagle
glow in the dark

The imprecision opens up possibilities, as though the blur itself might be the purpose, skimming across one meaning toward another, composing pool shots in quick twists, turns and deflections. Sikkema’s writing is nearly a merge of the language poem/lyric and the surreal tilt long favoured by such as Barwin himself, Stuart Ross, Lilian Necakov and others. This chapbook intrigues, and makes me interested to see just what else Sikkema has published, apparently “the author of several chapbooks and the full length collection Futuring.”

Toronto ON: Toronto poet David Peter Clark is working a poetry at a pretty high level of language in his co-published feathereDinosaurs (Toronto ON: A Shuffaloff / Eternal Network Joint, 2012). The Eternal Network is the occasional publishing arm of writer and editor Victor Coleman, releasing works quietly, going back (at least) to the mid-1980s. Has anyone, I wonder, compiled a bibliography of the press, or done any otherwise work upon the press’ output? I know that over the years many of the publications have been by Coleman himself, with some early works by Alice Burdick as well, but I’m uncertain who else might have come through (if anyone), so a new publication is certainly something worth paying attention to.

There is such an intelligent and vibrant joy to this work, a play of language, fragment, sound and fractured meaning in these poems, and the poems might need to be heard as much as they are seen. Each poem is titled from the name of a dinosaur (whether real or fictional), allowing the title as much as a descriptive title as jumping-off point for a mélange of melody and verbal twist in a collection of nearly thirty poems. Just who is this David Peter Clark?

Attempting to compose “love poems” is a treacherous game, and so often poems fall into the muddy terrain of cliché or other conflicts, but these pieces skim across great distances to achieve their depth, and manage to evade all the usual trappings of the dreaded “love poem.” Why do I call them “dreaded”? Because so many of them are done so poorly, and often oversentimentally-unoriginal. I originally misread the title as poems for “moths,” which sent me off on a series of odd and interesting directions, but quickly figured out my misread, and self-corrected. Dedicated to her husband, the poet Chris Martin, Speaker’s 20 Love Poems for 10 Months is a lovely offering stretching a ten month period, the specific meaning of which is left for the reader to speculate. Each section of the poem exists as a single, unbroken broken line of halting breath, nearly composed as an accumulation of breath-koans.