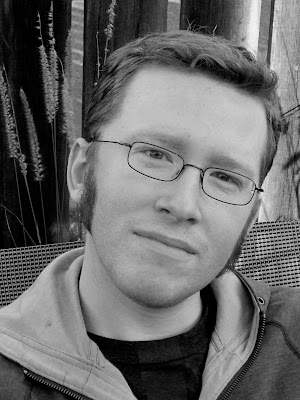 Andrew Grace’s 3rd book of poems, Sancta, was recently published by Ahsahta Press. His poems have appeared in Boston Review, Denver Quarterly and Ninth Letter and are forthcoming in Nimrod, Beloit Poetry Journal and Tusculum Review. He is a PhD candidate in creative writing at the University of Cincinnati.

1 - How did your first book change your life? How does your most recent work compare to your previous? How does it feel different?
My first book didn't change much in my life, at least in tangible ways.  It did give me the confidence to believe that I could be a poet and buoyed me up in those times later when a poem was hard to come by.

2 - How did you come to poetry first, as opposed to, say, fiction or non-fiction?
I didn't know much about poetry until college when I took my first workshop.  Back then I was really into punk rock, and I actually think that that had something to do with falling in love with poetry.  Not that the music is necessarily poetic.  One of the things that I loved about punk was that I could go to shows and see my favorite bands from five feet away.  It was an accessible world that I could feel part of.  Poetry was the same way (in this analogy, the canon and big name fiction writers are arena rock, only to be seen from the nosebleeds).  When I went to readings in college, I realized that poetry wasn't just by dead white men.  You could talk to the poet after the reading, even (usually) the famous ones.  It felt inclusive in a way that I didn't expect.  Poetry, like punk, isn't turning anyone away.

3 - How long does it take to start any particular writing project? Does your writing initially come quickly, or is it a slow process? Do first drafts appear looking close to their final shape, or does your work come out of copious notes?
I have found that I have to work fast.  It didn't used to be that way, but now that I have kids and jobs/schoolwork, the hours in which poetry can happen are limited.  Usually my first drafts are somewhat close to the final version.  In terms of formulating a project, that is a slower process.  I currently have multiple projects going on, which complicates things.  As much as I can when I'm writing any given poem, I try not to think of which project it should belong to, since that limits the poem somehow.  So I try to write a bunch, then sort out which manuscript (if any) the poem belongs to.

4 - Where does a poem usually begin for you? Are you an author of short pieces that end up combining into a larger project, or are you working on a "book" from the very beginning?
I do think in terms of books.  My favorite poets seem to do so as well.  One of the qualities in a poet that I admire most, and try to cultivate in myself as well, is range.  I love poets in whom each book feels different, whether in form, subject matter, etc.  For example, each of C.D. Wright's books feels different to me, and she has run that gamut of styles throughout her career.  Same with Brenda Hillman.  Even Creeley is much more diverse than he is usually given credit for.  In the moments when I'm writing a poem, I try to only pay attention to what that poem seems to want to become, but when I step back I am always conscious that I am writing a book, and that it should be different in some way than anything I have done before.

5 - Are public readings part of or counter to your creative process? Are you the sort of writer who enjoys doing readings?
I do enjoy readings.  Lately I have been forcing myself to write a new poem for every reading, so that they can be an excuse to produce some new work.  It makes a poem happen much sooner if I know I have to read it in front of strangers (or worse, friends) soon.

6 - Do you have any theoretical concerns behind your writing? What kinds of questions are you trying to answer with your work? What do you even think the current questions are?
I could answer this question, but any answer would be tagged on after-the-fact.  In other words, looking back on my work I can see that I'm concerned with representing a certain experience of rural life, or trying to conduct some sort of conversation with a certain text (in the case of my new book, Walden was a big touchstone), but while I'm writing I try to keep my mind blank and ready for anything.

7 – What do you see the current role of the writer being in larger culture? Does s/he even have one? What do you think the role of the writer should be?
These are large questions.  I'll give a short, probably insufficient answer--the writer does have a role, whether or not anyone is listening.  The writer is supposed to point our attention to the things that we would never think about if not for them.  They fill in the gaps of knowledge that mainstream consciousness ignores.  They also remind us to treat language with respect, even if that means undermining it.

8 - Do you find the process of working with an outside editor difficult or essential (or both)?
I rarely work with an outside editor, and I'm beyond the workshop phase.  That sounds pejorative--workshops have been great for me, but I'm not in one now and probably won't be for a while.  I show my wife my poems sometimes, or a few friends.  But rarely do I ask about specifics.  If I'm trying something new, I'll ask for another set of eyes just to make sure what I'm writing is anything.

9 - What is the best piece of advice you've heard (not necessarily given to you directly)?
Per Niedecker:


Grandfather
advised me:
Learn a trade
I learned
to sit at desk
and condense
No layoff
from this
condensery

10 - How easy has it been for you to move between genres (poetry to critical prose)? What do you see as the appeal?
Not easy.  I am in the final stages of getting my PhD, and it has been a humbling experience to refine my prose skills.  Prose is demanding--there is no hiding anything.  But that has actually made me think about how I write poetry, and how much I have let myself indulge in some decoration in past poems.  Pound was not kidding when he said poetry must be as well written as prose, and it's harder than it sounds, at least for me.

11 - What kind of writing routine do you tend to keep, or do you even have one? How does a typical day (for you) begin?
I don't have a routine at the moment, but I always write best when I do.  While I was writing Sancta I was writing 2 hours per day, one in the morning and one in the evening.  I did one prose poem per day for months.  That's something I hope to get back to if time ever allows for such things.

12 - When your writing gets stalled, where do you turn or return for (for lack of a better word) inspiration?
Other people's books.  Reading is the most generative thing for me.  And Trader Joe's dark roast.

13 - What fragrance reminds you of home?
Corn and sweat.

14 - David W. McFadden once said that books come from books, but are there any other forms that influence your work, whether nature, music, science or visual art?
Music is a big one for me.  Sometimes a lyric will spark something in me for a poem, but more often I try to recreate the sensation that I get when I hear a certain song in a poem.  For example, I'll try to write a poem that I think creates the same atmosphere as Leadbelly's "In the Pines."  I'm still working on that one.

15 - What other writers or writings are important for your work, or simply your life outside of your work?
This is another question that I could go on about, but the poets that I've been loving lately are C.S. Giscombe, Frank Stanford, Ted Hughes, Lorine Niedecker and Albert Goldbarth.  Michael McGriff's new book is terrific.

16 - What would you like to do that you haven't yet done?
I'm not well-traveled at all outside of the US.  I'd love to fill my passport pages some more.

17 - If you could pick any other occupation to attempt, what would it be? Or, alternately, what do you think you would have ended up doing had you not been a writer?
I come from a farming family in Illinois, so that's what I would have done had I not pursued writing.  I still think of it sometimes.  It wouldn't be a bad life for a writer, given that the machinery is so sophisticated and large that planting and harvesting, while still intense, don't take nearly as long as it used to.  Lots of writing time.

18 - What made you write, as opposed to doing something else?
It was the only thing I was ever especially good at.  I was always a decent student, but I never felt really talented at something until I started writing poetry, mainly because of the generous support of my first teachers, particularly John Kinsella.

19 - What was the last great book you read? What was the last great film?
I have failed miserably as a movie-goer ever since my daughter was born, so I'll stick to books.  I'm not sure if this is sneaking up on anyone else, but it snuck up on me: Geoffrey Hill's Mercian Hymns is wonderful.  I didn't read it until after Sancta was published, but they have a lot of similarities--brief prose poems, all from the same speaker.  Hill's book is blends the ancient kingdom of Mercia with contemporary England, so it's parts historical and autobiographical.  Strange and wonderful!

20 - What are you currently working on?
I'm working on a long narrative poem called Pin it on a Drifter.  Its set in the early 20th century on a farm in rural Illinois and is narrated by three characters: a woman, recently widowed, her son, who helps her run the farm after his father’s death, and an unnamed drifter figure who, during a respite from a coast-to-coast railroad journey, seeks shelter in a seldom used barn on the woman’s property.  Eventually the drifter can not resist the urge to get closer to the family, and in doing so brings the poem to the brink of violence, and perhaps even past the brink.

Hey, good to hear Andy chat. On his passport he has Australia stamped somewhere. We had an eventful adventure touring the outback of Western Australia not so many years ago - Prof Andrew Taylor, Glen Phillips and Andy Grace with two other US students. I started a renga with the group but then had to retire, injured. They sent me a dag as a get well gift! A real 'dag'! I cherish it.