My ex had clinical anxiety. This fact does not explain everything. But some parts of our relationship were a tile to him.

Today I take the three towels that are in Soft’s closet and lay the down in the tiled hallway, which connects to the carpeted office and bedroom. The way dreams connect to new landscapes that are really just the same familiar landscapes. Frog begins to race along the towels and into each room and back again, into each room and back again, growing increasingly excited.

Eventually Frog gets to the bathroom. He pauses, craning his neck out over the cool, ocean-blue ceramic floor with my stray hairs scattered over it like drawn-on waves. He twitches there a moment. Then he jumps.

If a man is someone you do things for, then a panicked man is not less of a man but more than one. 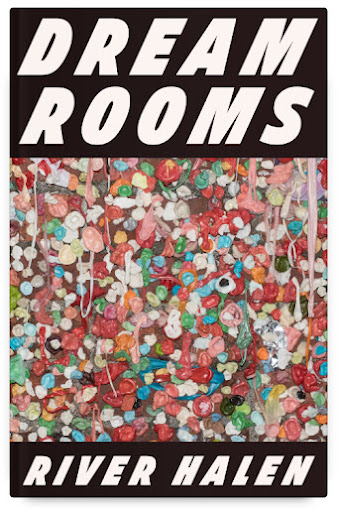 Produced as the fifteenth in Book*hug’s “Essais Series” is Montreal poet and editor River Halen’s latest poetry title, Dream Rooms (Toronto ON: Book*hug Press, 2022). Dream Rooms is self-described as “part essay, part poem, part fever dream journal entry,” set as a book-length exploration “about personal revolution, about unraveling a worldview to make space for different selves and reality. Set in the years that led up to author River Halen coming out as trans, this collection concerns itself with what sits on the surface of daily life, hidden in plain view, hungry for address […].” The table of contents offer but eleven poems in the collection, although these exist in the larger structure of the collection almost as signposts, or even Greek Chorus, offering dated journal-esque entries in sequence as the tether that runs across and through between these pieces. “There were no women in my childhood,” they write, as part of the opening poem, “SELF LOVE,” “in books or real life / just men and cows— / the women I loved were all men / and the women I didn’t, cows. / No women in this exploration, either / just a man and a cow / and I was both—I did not know / how profoundly—this hurt [.]” Perhaps, at times, certain of these titles might be set as section-openers, simply highlighting where the next stretch of Halen’s explorations begin, grouping each short selection of prose poems underneath a kind of banner. “When I go to the bathroom / to cry about your failures,” Halen writes, to open the poem “REASON,” “I do it just like you / if you were me / watching the mirror / to see if sympathy is possible / then trying my best / to cry more beautifully.”

Curiously, I hear echoes of tone from Shannon Bramer’s scarf (Toronto ON: Exile Editions, 2001) in Halen’s journal-lyric; although that particular poetry collection was composed as a fiction, both collections are written through first-person journal-entry narration through the lyric around isolation, shifts and an attempt to work through the shifts to a place where the ground has begun to settle. It is interesting how the “essais” series-to-date, curated by Toronto poet Julie Joosten—including Erin Wunker’s articulate, irreverent and thoughtful Notes from a Feminist Killjoy: Essays on everyday life (BookThug, 2016) [see my review of such here], Margaret Christakos’ remarkable lyric essay/memoir Her Paraphernalia: On Motherlines, Sex/Blood/Loss & Selfies (Toronto ON: BookThug, 2016) [see my review of such here] and Chelene Knight’s Dear Current Occupant: A Memoir (Toronto ON: Book*hug, 2018) [see my review of such here]—each exist as book-length personal studies through varying forms of the lyric essay, blending non-fiction with the lyric form to examine, determine and situate, or even re-situate, the particular author’s thoughts on identity, living and thinking. Halen, the author of a handful of poetry collections, works in this collection to situate themselves through and including their coming out as transgender. “So there was never any pure time / if pure time exists for anyone,” they write, to open the extended poem “HONEYMOON,” “I do not know [.]” In Dream Rooms, Halen simultaneously reveals and creates a new kind of space for themselves in the space of their own body, and their own body in space, one occupied by family, friends and current and former partners. Halen’s sentences reveal and invoke, blending the best that their poetry and non-fiction through this multi-faceted examination of form, from gender identity and the prose essay through the poetry day book. This, one might say, is the story of the thinking around that particular experience, and that particular time.

The Spanish Civil War is called the Spanish Civil War because within one country two sides fought and eventually the fascists won and kept power for thirty-nine years. Whereas the Mexican Revolution is called a revolution because when two sides fought, the fascists lost. When Díaz was deposed, dictatorship ended. Frida Kahlo, who was three years old at the time, was born again, a revolutionary and a communist. She often lied about her age to convey this truth—she would say she was born in 1910, the year the revolution started, instead of 1907.

Once I wanted to explain my complicated terrain of stubble and thickets to a lover, and I overshared. I composed an email titled “My body hair: a summary,” which contained a list of numbered points. Writing this email was intoxicating, like suddenly unleashing the story of my life. I am still revising and adding to it, even though I sent it a long time ago and that lover has moved on.

Frida Kahlo depicted herself very often in her art. Many of the physical experiences of her life are represented there explicitly. (“THE FULL IMPULSE”)

Posted by rob mclennan at 8:31 AM
Labels: BookThug, River Halen