What makes you possible? In its premiere, you watch Chopped at Gold’s Gym, bouncing on a treadmill toward a flatscreen of competitors. You are the child of a restaurant, steeped in sodium and stir-fry. Something strange now, you burn calories on a conveyor belt powered by the other burning of prehistoric flora. At night, you slip into bed and wait to wake at the banging of your door by your brother’s fist. For the next twelve hours, you stand next to your mother at the Fortune Gourmet. People eat rice. People sip cola. People drop broccoli on the carpet and flee. You were sixteen then. You still had a healthy relationship with television. 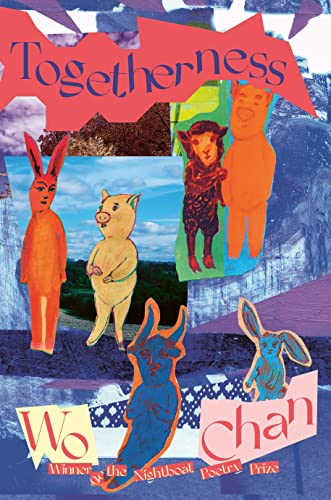 Winner of the 2020 Nightboat Poetry Prize is Brooklyn poet and drag artist (under the moniker The Illustrious Pearl) Wo Chan’s full-length debut is Togetherness (New York NY: Nightboat Books, 2022), a collage of prose poems and more traditionally-shaped poems assembled via performance and lyric gestures across first-person narration. In poems simultaneously intimate, gestural, revealing and performative, Chan writes on gender and family, of being an immigrant child of immigrants, and seeking to navigate the ongoing realities of racism and gender discrimination. “I believe that art and violence are the only things that can truly change / another person.” they write, to close the poem “@nature who’s willing,” “It unnerves me that most people cannot // —will not— // appreciate either.” Chan writes of and around drag, androgyny and the very performance of gender while offering poems on possibility, grief, survival and thriving. Chan’s poems swing and sweep, staccato and strut across the space of both page and stage, as the opening poem, “performing miss america at bushwig 2018, then chilling,” offers: “i wanted only to see soft things: your empath / friend, Our Lady of Paradise, gives guided meditations, undoing some violence // in synchrony, she sings under the megawatts of her holographic leotard: / new songs about her gender dysphoria. / my smile pancakes beyond the edges of my cuisinart / face ‘she’s so greeeaaaat’ i say stretching like an accordion. // but, how useful are words now?” In many ways, Togetherness is a book-length stage show, offering how truth and vulnerability can sometimes only be achieved through a combination of craft, skill and artifice, and an honesty as necessary as it is refreshing. As they write as part of the poem “what do i make of my face / except”: “when i was nine / i watched aladdin and thought, after money / i wish for whiteness [.]”

In what is essentially a performance speaking to childhood and family, the collection includes a thread of testimonials composed for American Immigration Officials on the subject of Chan’s parents, who were seemingly well known and well liked in their community of Fredericksburg, Virginia, where they owned and operated a restaurant. As the press release reveals, Togetherness writes “[…] stories of the poet’s immigrant childhood spent in their family’s Chinese restaurant, culminating in a deportation battle against the State. These narrative threads weave together monologue, soaring lyric descants, and documents, taking the positions of apostrophe, biography, and soulful plaint to stage a vibrant anddaring performating in which drag is formalism and formalism is drag—at once campy and sincere, queer, tender, and winking.” The testimonials are complimentary and quite moving, although some include a level of underlying cringe, whether as a subtle racism, or through reducing their value purely to their ability to pay taxes. Writing on and around family, Togetherness writes on the ties that do bind, and the poems hold and carry a great deal of care for their family, one that works through a kind of one-person performance around a very particular series of experiences across Chan’s childhood and adolescence. This is a vibrant, critical and loving collection, one that startles through both the strength and vulnerabilities displayed throughout Chan’s glorious, tender and occasionally wild performance. Consider, for example, the three page poem “Years Flow By Like Water,” that concludes:

I love them. I know that is not a radical statement,
but I love loving them.

I hate how we were raised, though it is done now.
I think it is over. The restaurant sold to our neighbor

who makes very bad food. Our parents:
they are in bed and resting diabetic, sewn in varicose veins.

We lived through these decisions.
The air is heavier than when we first arrived

in San Francisco airport, my mother staring down the wall of terminal
glass that shines a vision of my brothers hauling

duffels, dragging luggage and my babyish hand,
already sweaty and floating through the shift home that wills to move us,

and will remove us from each other.

Posted by rob mclennan at 8:31 AM
Labels: Nightboat Books, Wo Chan