All books are full of errors—be they of diction, grammar, technique, fact, bibliography. The typewriter makes visible particular types of error—material errors, machine errors, operator errors. Those errors contrast the dream of precision on which typewriters were advertised; they are a return to the human error from which the typewriter was supposed to offer freedom. They also offer a visual counterpoint to the concision and (presumed) precision of minimalist works.
In the twenty-first century, a book of typewriter works is also necessarily a book of decay, and the works in this book are saturated with it. This book documents fragments of keys chipping away over time and type bars becoming warped (the uppercase ‘E’ and the lower case ‘d’ in particular caused me problems), components giving out, the scarcity of replacement parts, the loss of knowledge. I have embraced that decay, and while I strove to create clean works, I also “allowed” such imperfections to remain. They register that I typed each sheet on Bill’s typewriter. (“SOME AFTERWORDS”) 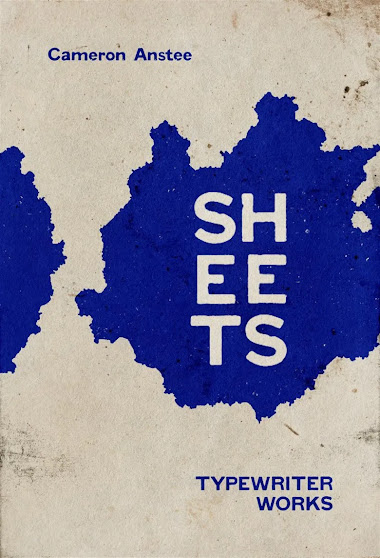 It is wonderful to see Ottawa poet, editor and publisher Cameron Anstee’s second full-length poetry title, following Book of Annotations (Picton ON: Invisible Publishing, 2018) [see my review of such here], his Sheets: Typewriter Works (Halifax NS/Toronto ON: Invisible Publishing, 2022). “This book began,” as he begins his “SOME AFTERWORDS” that end the collection, “following the death of my friend, the poet William Hawkins, on July 4, 2016, when I was gifted his Olivetti Lettera 30 typewriter.” Composed entirely, it would seem, upon the legendary late Ottawa poet and musician William Hawkins’ [see my obituary for Hawkins here] typewriter (and produced to replicate that particular typeface), Anstee’s Sheets: Typewriter Works furthers Anstee’s poetic explorations into and through the minimal, but through gestures that extend both the act and result of writing—both composition and erasure—into the deeply physical. The effect is striking and immediate, as one catches the imperfect image of the text on the page, and the occasional letter slightly askew. The process is reminiscent of how, years ago, Ottawa poet, publisher and bibliographer jwcurry spoke of curating his 1cent series of publications—each of which are poems produced through individually hand-stamping from a child’s set, one phrase or line at a time—as being curated, in part, through that measure of physicality: completely refusing a production aesthetic of publishing ease. It was one thing to love a poem enough to hand-print the one time, but fifty, or even one hundred times? How much might one have to love a poem to hand print it, line upon line, one hundred and fifty times? One might think that very few poems might survive such a requirement. And so, too, to Anstee’s minimalisms: potentially condensed even further through the physical act of composing upon a fifty year old typewriter. 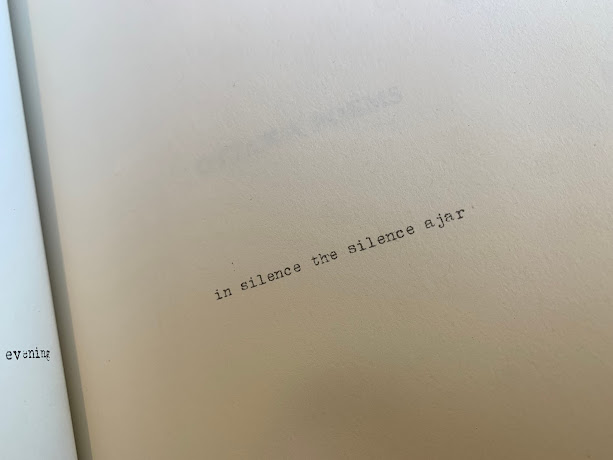 Anstee works his collection across a sequence of project-sections: “Rehearsal,” “Afterworks I,” “St. Andrew Voices,” “Ottawa Poems,” “Baseline Variations,” “Afterworks II” and “Milostná Báseň.” “Ottawa Poems,” for example, exists as an erasure of Hawkins’ classic 1966 poem-sequence Ottawa Poems, examining and reworking the twenty-seven sections of Hawkins’ lines with his own typeface-as-erasure, and seeking through his words to discover an entirely different kind of thread. There really is something intriguing about watching Anstee rework Hawkins’ work with his own machine, knowing that first Anstee would have had to type out the entirety of Ottawa Poems (and perhaps, even multiple times) for the sake of attempting erasures; it would suggest, as well, that Anstee might just know those particular William Hawkins poems better than anyone else [Anstee was also editor of The Collected Poems of William Hawkins, which is also available through Invisible Publishing].

Sheets: Typewriter Works includes poems-in-homage, specifically through the two “Afterworks” sections, to creators such as Barbara Caruso, Jiří Valoch, Kate Siklosi and Dani Spinosa, Alex Porco, PSW, Mary Ellen Solt, Phyllis Webb, Nelson Ball, bill bissett and Nicky Drumbolis. But in the larger sense, Sheets: Typewriter Works holds an echo of Kingston writer Michael e. Casteels’ The Last White House at the End of the Row of White Houses (Invisible Publishing, 2016) [see my review of such here], or, more specifically, Toronto poet Dani Spinosa’s OO: Typewriter Poems (Invisible Publishing, 2020) [see my review of such here], in how he appears to approach this work as a kind of poetic study, one centred around the possibilities of the physical poetics of this generation of typewriter, as well as a variety of generations of typewriter poets. As his “NOTES TO THE POEMS” offers: “This book exists in conversation, directly and indirectly, with past and contemporary typewriter poets, and while I will not hazard to offer an inevitably incomplete list of the works and writers that are in the DNA of this book, the pieces in Afterworks I and Afterworks II, and their respective notes below, offer a partial glimpse of some of the reading and looking and thinking I was doing while working.”

There is a meditative kind of breathlessness to these understated gems, one that allows each poem to sit, not as a complete thought, but as individual gestures as both moments in space and as part of a lengthy, open-ended and even life-long sequence. While poets such as Mark Truscott might compose short poems set in the moment, the poems included in Anstee’s Sheet: Typewriter Works offer a structure far larger, and more complex; as though his short sketches sit as stardust, a potentially life-long study of and through minimalism, gesture and utterances both visual and verbal, simply set as book-length units of sections, which are themselves built out of individual poems, lines and words. “We are stardust,” Joni Mitchell sang, “we are golden.” And in certain ways, perhaps everything that makes up a poem by Cameron Anstee is what everything everywhere else is made up of as well.