Michael e. Casteels, The Last White House at the End of the Row of White Houses

On the bank of the stream, I meet a hunter. His gun is moss-covered, his beard thick with foliage. He says he has been lost for years. I tell him he is not far from the village and I can show him the way back. He smiles a toothless grin and says he’s been away too long to go back. He now understands the nature of change, leaves turning from green to red as he blinks. I grab his arm to lead him, but the limb snaps off in my hand. The hunter looks at me with knotted eyes and shakes his head. The air grows cold. The wood needs splitting. I lift my axe and swing. He smiles a toothless grin and tells me he has been lost for years. 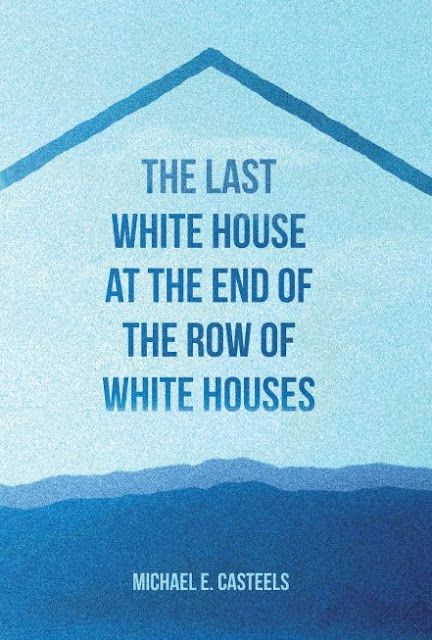 There is a surreal strangeness to the narratives of Casteels’ prose poems, one that works to keep the reader slightly off-kilter, forcing a deeper attention to the ebbs and the flows of his sentences. “The primates spot-checked their harpsichords, spoon-fed the plesiosaur, and garrisoned the tax collectors.” he writes, to open the poem “A BRIEF HISTORY OF THE ICE AGE.” There is something wonderfully charming about these poems, in which Casteels presents something quite familiar, but slightly askew, turning expectation inside out, whether writing about turnips “grown in the / fine pastures of Heaven and harvested by divine angels / of light,” or of oracles, hermit crabs and turkeys. There is very much a thread of the metaphysical that runs through these poems, one that seeks a comprehension deeper than what can be seen on the surface, and one that remains elusive, nearly ghost-like, composed as a perfect blend between the tangible and the intangible. These are beautiful, strange and uplifting poems, set on the border between what is known, and what might be impossible.

THE ROCKING HORSE AND THE FLOOD

The wooden horse swayed in the breeze. The rain continued. The smell of wet cement was replaced with the fragrance of ocean. There was no plug to be pulled and the tide rose quickly. The sidewalk sprouted seaweed, cars gargled and sputtered. The wooden horse reared on, galloping over the waves, its mane glistening, teeth painted into a smile. Our neighbor was building a raft out of garbage cans, but it was too late; the horse had rocked out of sight, its wooden hooves splashing like a child in a puddle.