I think, now, that there are questions to be asked about access, ownership, and agency. I think, now, that claiming space and having a place at the table of Big Ideas and Important Thinking are not the same thing. I think, as I write myself into being a writer, that there’s a lot of work to be done on so many different levels. Figuring out where and how I stand, myself, seems crucial in order to try to stand with others who are affected differently by aggressions of misogyny, racism, homophobia, transphobia, ableism, class, and, and, and… (“Introduction: Some Notes for You, Reading”)

The second title in BookThug’s “essais” series, edited by Toronto poet Julie Joosten, is Erin Wunker’s articulate, irreverent and thoughtful Notes from a Feminist Killjoy: Essays on everyday life (BookThug, 2016). Borrowing her title from British writer and academic Sara Ahmed’s research blog feministkilljoys, Wunker utilizes the idea of a “feminist killjoy” as one who sees feminism (a term she discusses as being complicated, multi-faceted and even willfully misunderstood) as the belief that all genders have equal value, and the foundations of the patriarchy, a presumed-standard which see maleness as vastly superior, as an argument worth kicking against. Given this, how could any thinking, feeling human imagine anything wrong with feminism? For Wunker, and Ahmed, theirs is to take away the “joy” of the patriarchy via the arguments of feminism. As she writes:

One place to start is with the term “feminist killjoy.” When I told my mother that I was thinking of writing a handbook about how to be a feminist killjoy, she expressed concern. Why did I want to make things harder for myself? Aren’t there enough epithets about willful subjects circulating without me deliberately taking one up for myself? Well, yes and no. The term “killjoy” tends to be derisive: someone who is a wet blanket, who rains on the parade. The person who says “quiet down” to people engaged in riotous laughter. But when appended to the term “feminist,” “killjoy” acquires nuance. “Feminist” is too often understood as inherently and problematically militant. When brought together, “feminist” and “killjoy” trouble the habitual understandings of each other. Double positives? Not quite, but taken together they usefully disrupt expectations and so-called common sense. 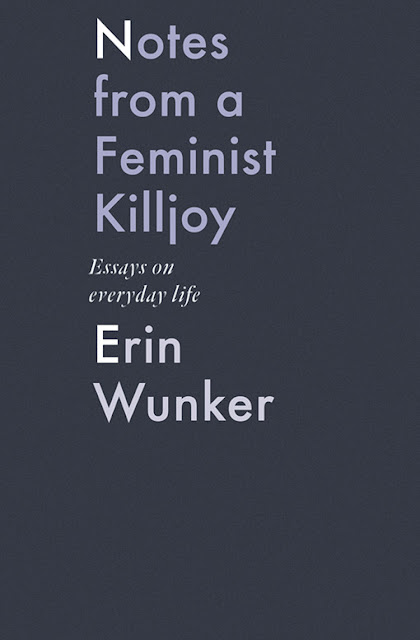 Wunker also writes about her own privilege through the process of writing from her own cisgender, white and middle-class perspective, and how the experiences of feminism with one isn’t necessarily the feminism of another (something that has become more prevalent in the arguments around Pride: how whiteness privilege, whether deliberately or otherwise, has pushed aside the founders of the movement that allowed for Pride: women of colour and the trans community); to presume otherwise would be severely reductive, false and counter-productive. Utilizing personal anecdotes, historical and contemporary examples and academic material, Wunker quickly establishes a deceptively informal tone that would allow even the most casual reader an easy entry, as she opens the book into a series of conversations and musings on some rather difficult subject matter. Through the course of her essays, Wunker attempts to discern how best to think, feel and simply be in the world in a positive, respectful and productive way, despite a series of acts and beliefs that work heavily against anyone not exlusively straight, white and male.

Composed as “notes,” the book is structured as any critical thesis might be—“Preface: Letter to My Daughter,” “Introduction: Some Notes for You, Reading,” “Chapter 1: Notes on Rape Culture,” “Chapter 2: Notes on Friendships,” “Chapter 3: Notes on Feminist Mothering” and “Postscript: Sometimes Refusal is a Feminist Act”—Wunker’s Notes from a Feminist Killjoy is smart, funny and visceral, terrifying and wise, and constantly attempting to comprehend, unpack and negotiate into language some extremely complicated cultural and human activities. Her writing is deeply personal and inviting, moving from conversation to theory in a completely natural way, utilizing theory to further that conversation that she knows she is but a small, but necessary, part of.

The difference between these questions and the original ones is that they presume a different future is actually possible. Both my friend and I were assuming the inevitabilities of rape culture in our infants’ lives. And that’s understandable. We’ve learned those narratives and inevitabilities ourselves. They’ve become our frames of reference. That’s the joy that needs killing: the sense of inevitability, that sense that rape—doing it or having it done to you—is somehow an inevitable, ever-present reality. Shifting our questions shifts our action, energies, and affects from within (I hope, I hope, I worry, I fret) to with each other. We move from the internalization of rape and rape culture as inevitable towards dialogue with others that positions rape, rape culture, gendered violence, and the associated traumas, big and small, as sites of struggle.

Given the lens of the results of the election south of the border, her chapter on rape is even more chilling, as she writes a recent history of reactions to an act of intimate violence that still manages to be dismissed by media, employers, universities and the law itself. Consider the recent story of the college student who raped an unconscious woman and was barely slapped on the wrist, as a judge suggested that he shouldn’t pay his whole life for a single act (oddly, an argument that wouldn’t fly if it were, say, murder), and that it could hurt his career opportunities. That might be terrifying enough, but to know that a rape charge isn’t enough to even prevent an electorate from voting for President is beyond unthinkable. As she writes:

If, as my editor and friend J. says so astutely, rape culture doesn’t have a linear history in either social memory or in our own biographies, then rape culture is atemporal and it requires atemporal, non-linear methods of putting words one after another to tell it and to tell it again. So if you find yourself automatically rejecting this, rejecting me as your interlocutor, take a moment to reflect on where the root of your rejection stems. From me? Or from the enormity of the joys that need killing?

I found her subsequent chapters – on female friendship and feminist mothering – rather enlightening, including the racist origins of the trope of the “angry black woman,” and her thoughts on feminism and mothering (given our own recent experiences around such, I found some of the personal stories she told of childbirth and mothering utterly charming). Really, anyone interested in culture and how it reacts with itself, or people and how they react with each other need to read this book. Visceral and heartfelt, Wunker’s Notes from a Feminist Killjoy: Essays on everyday life is well-researched and clearly thought, bringing in a variety of disparate threads into a coherent comprehension into contemporary culture. There is an enormous amount of information she unpacks here, and clarifies. This book should be considered essential reading.

I’ve read about female friendships described as romances and as the last bastion of truly platonic desire. This narrative appeals to me—it’s resonant with [Lisa] Robertson’s dark body of friendship—but it also makes me wary. It seems to me that recycling one storyline—the romance—means dragging all the sedimented associations of that storyline with you. I’m more interested in naming the ways this world does not make room for female friendship and discussing the ways those frienships form and thrive, despite the world as it is.

And working to build new worlds.