You could say that form is learning

you can see form take shape

at the coronal suture’s first arcade

usually it’s repeating why is form

a dog as a horse as a deer as a

fish and a bramble a grater rapacious

the second cervical vertebra is

repeating is a question we can

ask with our bodies and what is

a toothy coccyx is the beak of an ancient

dove below the sacrum the tip of

the sacrum places in the person a

sensation of slow form repeating it

doesn’t require its own skin to repeat (“On Form”)

As the press release for Canadian poet Lisa Robertson’s 3 Summers (Toronto ON: Coach House Books, 2016) informs: “What began as a conceptual project for Robertson – working from and through Lucretius’s De Rerum Natur – evolved into this series of reports on the state of the poet’s living body and its thoughts, told from the heart of three summers spent in rural France.” This is not the first time Robertson has explored the Roman poet and philosopher Lucretius’s only known work, as Emily Critchley, in a review for the Poetry Project Newsletter, wrote that Robertson’s Magenta Soul Whip (Coach House Books, 2009) was:

a profound poetic meditation on the nature of things – after Lucretius’ epic philosophical poem on Epicurean physics, De rerum natura. It is about creation; it is about humanity; our propensity for naming (language); faith, or ‘the long science of submission’ as the poetry puts it; fear; love (familial, sexual, metaphysical) and the ‘liquid rope’ that attaches all of these: that of knowledge. Says the opening line of the collection: ‘Sit us on Lucite gently and we will tell you how knowledge came to us.’ 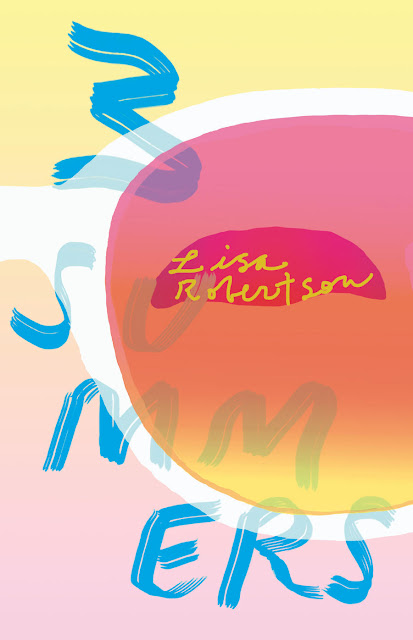 3 Summers is composed in eleven poem-sections, utilizing variations on the collage/fragment, including numerous pieces as short sketches – “The Seam,” “Toxins,” “On Form,” “On Physical Real Beginning and What Happens Next,” “The Middle,” “A Coat,” “Rivers,” “Party,” “Third Summer,” “An Awning” and “Rose” – and opens with this short untitled poem-fragment:

a minimum of sensible time

a minimum of thinkable time

a time smaller than the minimum

a time smaller than the minimum of thinkable time

a minimum of continuous thinkable time

a time smaller than the minimum of sensible time

a minimum of continuous sensible time

3 Summers, then, could be considered an extension to Magenta Soul Whip, writing out similar threads of the semantic, familial, theoretical and metaphysical: writing out the pure, complicated and sprawling facts and fancies of being, even as each section wraps itself around a singular idea. “I want a pause in vocation.” she writes, as part of the poem/section “On Physical Real Beginning and What Happens Next.” 3 Summers is also temporally grounded, being fixed in time and moving through it, and remain the central concern of the entire collection: how we move through time, with thoughts on ageing, the recriminations of lost time and musings on how much might remain. “In the summer of 2014,” she writes, to open “Rivers,” “I’m still in this landscape of quiet poorness [.]” The poems of 3 Summers are incredibly expansive; composed in waves, utilizing repurposed, repeated phrases and twisting meanings, circling around each poem’s centre, as she writes in “The Seam”:

In my school called how can I live
in my theory of appearing
I lay out my costume.
We don’t belong to culture. We’re sunsets.
We simplify thought
until it resembles
stripes.
Our skin itches.
I beg you – show me something unknowable.
I don’t believe in this possibility of knowing.
Stop hiding from life! we say to ourselves.
As for the image
how will it start?
The flipped-over buses
the strange stuff suspended in the air
while they copulate they  turn their heads
towards the east.