If you try to cross
a river wearing a veil
of concrete and glass,
how long will it be before
the bomb goes off? If you wan

der the fermented
fields of soap, blindfolded and
with a daisy in the
barrel of your rifle, how
long will it be until you’re

aiming at yourself?
Tell me, how many hands did
you have to hold when
you leaned forward to unlock that
door? My friend, who died a thou

sand deaths. It takes a
true coward to resist re
sisting while dan
cing in the dark. 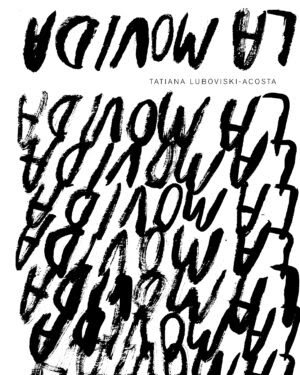 I am very much enjoying the dark jabs and joyful play of language, revolution and compressed, packaged time of La Movida (New York NY: Nightboat Books, 2022), San Francisco-based “queer anarchist Nicaragüense American artist” Tatiana Luboviski-Acosta’s second full-length collection, following The Easy Body (Timeless, Infinite Light, 2017). In poems rife with chaos and insurrection, trauma and passionate resolve, set amid occasional black and white sketches, Luboviski-Acosta’s lyric is grounded in a poetic powered through collective strength, one that runs through threads of Spanish-English bilingualism, language and politics, left wing radicalism and class struggle. Luboviski-Acosta opens the collection with a poem referencing drug addiction and mental illness, including their father, who drove into the ocean and lived. “he survived.” they write, “and then, / he was able / to torture us / with his aristocratic ascetic drama / for years to come.” There is some dark territory covered through these poems, one that moves as much through an uncertainty as a particular kind of resolve, from the triptych “THREE BISEXUAL TALES” to an array of poems named after individuals, including a poem that shares the author’s own name. As that particular piece opens, offering as best an ars poetica across two-plus pages as anything else I’ve seen: “I want the freedom / to make art about nothing / in particular. / Nothing is stopping me— / nothing, except for you.” It is a remarkable poem amid an array of remarkable poems, pinballing a strike across sound and rhythm, divided words and the lingering effects of a divided, fractured history. These are poems forged in fire, able to give as good as it gets. “Alive out of spite, / a general strike,” they write, to open the poem “AMARANTH,” “a knife / to upper lip, a bright laughing clit, and raven / ous walls all throb for the means // of production.” These poems are witty, incredibly smart and playful, and hold incredible weight, stitched together through romantic love, delightful optimism, nightmares and scar tissue. Or, as Luboviski-Acosta’s namesake poem closes: “If you can’t already // tell, my entire last name is / a narrative of aban / donment—it could have / been worse. I could have been that // deep breath, that striking / lingual flirtation before // the objection.”
Posted by rob mclennan at 8:31 AM
Labels: Nightboat Books, Tatiana Luboviski-Acosta