Scissors cut
through the snowflaked

Trims herself, gives herself
fringe. Makes more like her.

Sisters, clones. She scissors
their slick

She hones her scissors
On sandpaper. She will marry

that abrasion. Make it
scrape her. She’ll 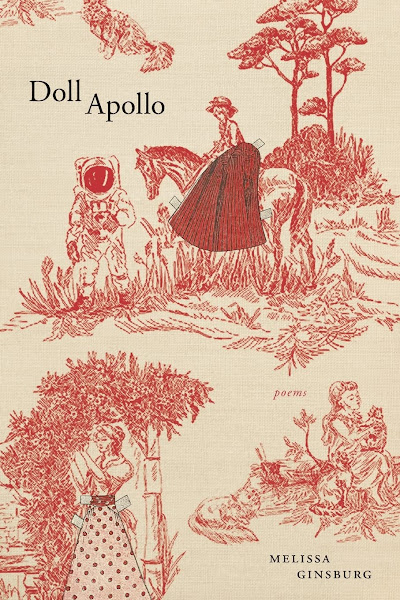 Mississippi writer and editor Melissa Ginsburg’s second full-length poetry title, following her debut, Dear Weather Ghost (Four Way Books, 2013), as well as the novels Sunset City (Ecco, 2016) and The House Uptown (Flatiron Books, 2021), is Doll Apollo (Baton Rouge LA: Louisiana State University Press, 2022), a collection described thusly on the publisher’s website: “With lush imagery and surprising syntactical turns, the poems in Doll Apollo merge mythology with close attention to the patterns, colors, and contours of the material world. Through the figure of the paper doll, the hoax conspiracy surrounding the Apollo moon landing, and lyrics embedded with violence and beauty, Melissa Ginsburg’s feminist ecopoetics weaves the domestic and celestial into considerations of female identity, desire, spiritual yearning, and doubt.” Ginsburg is a poet I first discovered through an issue of FENCE magazine back in 2015 [see my review of such here], and her Doll Apollo (which doesn’t include the work from that issue of FENCE) is a book-length lyric framed in a reference to the Ancient Greek myth of Daphne and Apollo; of the nymph pursued, and finally, transformed for the sake of protection. “halted mid stride / un-nymphed as mayflies,” the opening poem, “Daphne,” offers, “laureled & wreathed [.]”

While the examination of working and reworking updates of mythologies through the book-length lyric certainly isn’t something new—there is something here reminiscent of Gale Marie Thompson’s own second full-length poetry title, Helen Or My Hunger (Portland OR: YesYes Books, 2020) [see my review of such here], offering her own lyric study of language and beauty, but on the mythical and multiple retellings of Helen of Troy—Ginsberg, on her part, utilizes less a retelling or reworking than allowing that particular myth a kind of loose framing to the collection, able to open up poems riffing off further directions, whether of paper dolls or stories of how the moon landing, via Apollo 11 in 1969, was actually faked. “doubt has been married so long to the altar,” the poem “When Doubt Comes to Apollo” ends, “each star a tribute doubt hunted and placed // on a plate [.]” As the collection opens with the singular poem “Daphne” and into a triptych of lyric sections: “Doll,” “Apollo” and “Toile,” Ginsburg swirls her references and narratives around that central core of Greek myth, writing out beauty and female agency, the stories we tell (including those we tell ourselves) that get altered, shifted and even twisted, and of space travel. As much as anything, this is a lyric of perception and doubt, and how perception shifts, shimmys and twists, even to the point of disconnect. As the second half of the poem “The Bench” reads: “We were figures // in a sketch of a cold deer path. // I did not expect to survive // such flattening. Then you said look // for a perfectly straight horizontal line // and under a mound of blue snow // such a line appeared.”

I find it curious, also, how she utilizes poem-titles in her work, as Ginsberg’s lyric distillations each unfurl from each singular point, utilizing titles almost as subject headers before launching into her examinations, often offering a closing line or two to satisfy a particular kind of closure to that singular moment. “I waited,” as she writes, to close the poem “One Cannot Read Oneself without Great Difficulty,” “quaking under ink // wanting the fingers and the eraser                  the eyes / of the circulars                           variously glossed [.]”