I have killed a bug on the page I am reading

To underline one passage is to help you locate it again

Having yellowed many dense passages I shall never return to again 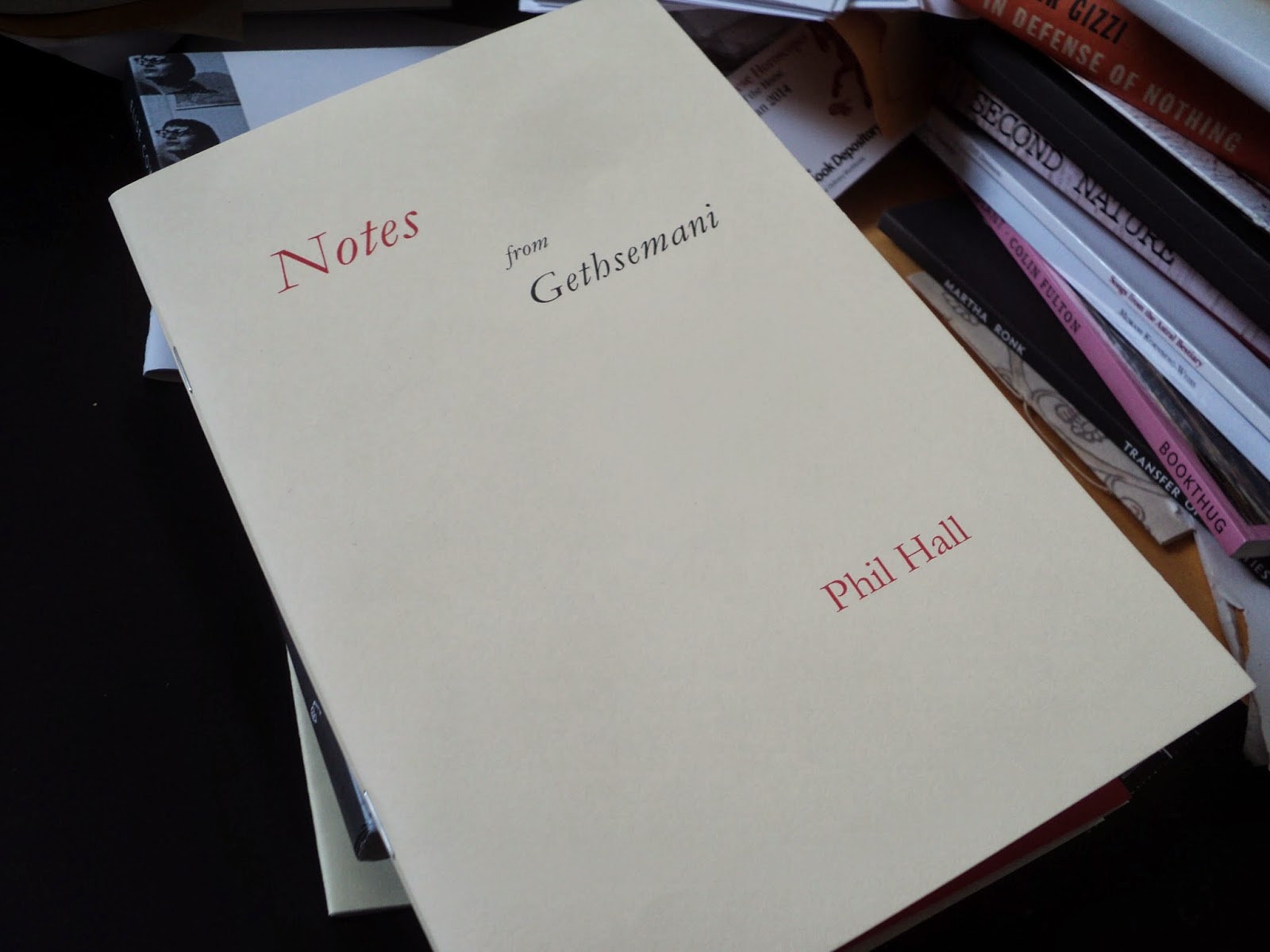 Originally presented as the “Inaugural Page Lecture—in Honour of Joanne Page” on November 14, 2012 as part of his writer-in-residence tenure at Queen’s University in Kingston, Ontario, is Phil Hall’s poem-essay chapbook Notes from Gethsemani (Vancouver BC: Nomados, 2014). “Think of what a page is—of what a poem is—what / they hint at being,” he writes, near the beginning of the thirty pages that make up Notes from Gethsemani. Award-winning Perth, Ontario poet and editor Phil Hall has been increasingly blurring the distinction between poem and essay in his work, most recently in his eleventh trade poetry collection, The Small Nouns Crying Faith (Toronto ON: BookThug, 2013) as well as through his previous, Killdeer (Toronto ON: BookThug, 2011), his work of self-described “essay-poems” that won the Governor General’s Award for Poetry and the Trillium Award, as well as being shortlisted for the Griffin Prize. The lecture-poem Notes from Gethsemani was composed, it seems, quite literally as notes during a retreat: “At the Abbey of Gethsemani—in Kentucky—May / 2012 // I was allowed a week of access to the monks’ library / & archives // To consider Thomas Merton’s personal library—to / contemplate the nature of rare library collections— / paper—page // To have the Abbot’s permission—to be allowed into / the book vault—to feel the door shut behind me— / us—a pressure[.]” Hall’s meditations on the page, text and the physical act of placing works upon various medium float, ebb and flow in a variety of directions, exploring the relationships between form, mechanism and distribution in a way that hasn’t been done before, or so well. Early on in the poem he writes: “Before it is written on—the page is a skin—a / surface—a weight—a bond—a field—a zone of / potential // Once marked—any skin is reduced—is as if / domesticated—fenced—lined—harnessed by ink & / rhetoric—it becomes readable—it becomes page [.]” Discussing Phil Hall and the Joanne Page Lectures in The Kingston Whig-Standard (posted October 17, 2013), Wayne Grady wrote:

As a poet, Phil is interested in the way writers relate to the page. When he was writer-in-residence at Queen’s University last year, he received an endowment from the English department to institute a lecture series dedicated to that very topic.

“I’m very proud of that,” he says, because he sees the series not only as a lasting legacy of his time there, but also as a way of honouring Kingston poet Joanne Page, after whom the series is named.

“The Page Lectures will be loosely based around the subject of the page,” he says, and will be given annually, by men and women alternately. He himself gave the first one last year.

“Every year,” he says, “I go down to the Abbey of Gesthemani, in Kentucky, on a kind of retreat.”

Sketched as a series of notebook entries, Hall’s poem writes out the physical act of writing from the mark on the wall to the page to the computer screen, and the nature of what that physical act requires and means: “Anyone who thinks that violence is not an element in / marginalia—not a factor in marking up a text[.]” Including textual examples by Susan Howe, Erín Moure, Ronald Johnson, George Bowering, Laurie Duggan, Souvankham Thammavongsa and Michael e. Casteels, Hall explores a fantastic meditation through his mastery of the essay-poem, weaving and meandering a variety of inquisitive and even folksy byways: “The fences that were captivity narratives—are in / Howe’s hands—a logjam of squeakings // The slash that will become the scar is what Derrida / calls différance—or pure trace [.]” Hall might entirely be one of the most thoughtful and inquisitive poets we have, able to explore questions and terrain that had, until now, not even occurred to others; and all in a way that would make any reader wonder: why not?

(Like the bug on my book left a tracing)