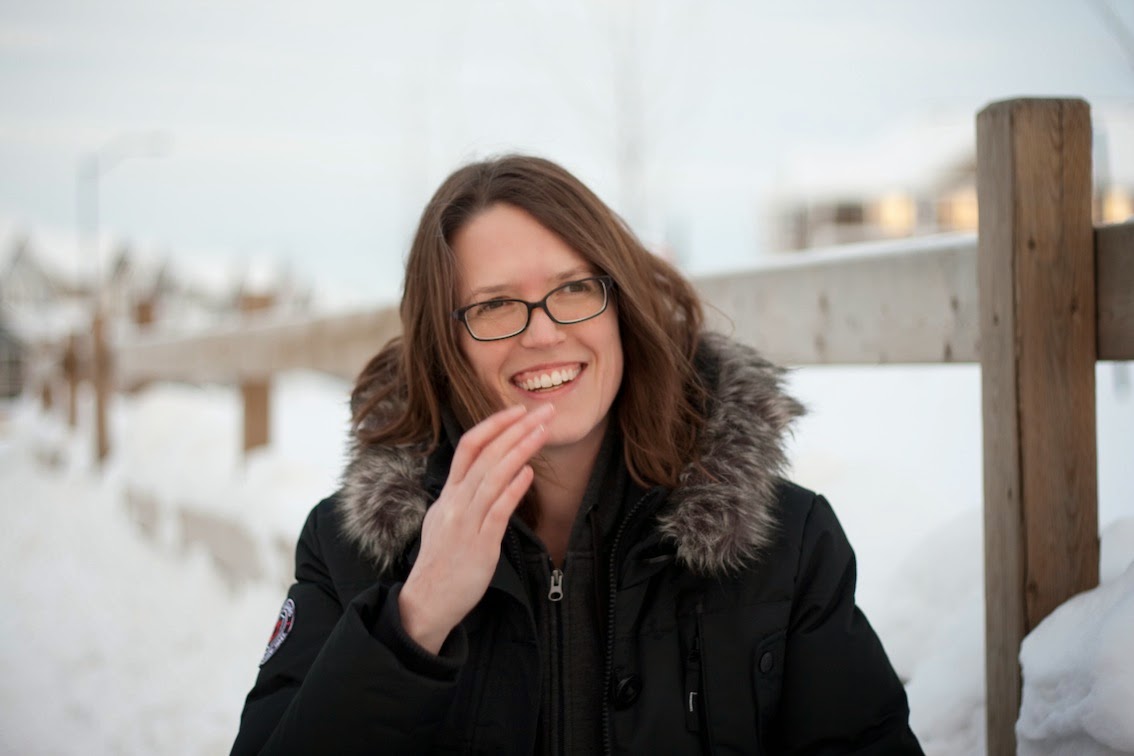 1 - How did your first book change your life?
It lends a tiny whiff of legitimacy. It’s a concrete thing that vouches for me. It took me to Edmonton, Regina, and Victoria to read. It makes my bio easier to write. It also brought with it the daunting expectation of a second book.

2 - How did you come to poetry first, as opposed to, say, fiction or non-fiction?
I’m told I was one of those freaky infants that bopped to the rhythm of a song on the radio before she could walk or talk. I spent my whole childhood, adolescence, and young adulthood dancing and playing music and every once in a while writing something down, and more often than not what ended up on the page was poem-like. It seems to me now that all these modes of expression and interpretation that I was engaged in as a young person were of a piece. They all involved bopping to the rhythm.

3 - How long does it take to start any particular writing project? Does your writing initially come quickly, or is it a slow process? Do first drafts appear looking close to their final shape, or does your work come out of copious notes?
Oh I can start things no problem. I’m just full of starts. Middles and ends take an awfully long time, however.

4 - Where does a poem usually begin for you? Are you an author of short pieces that end up combining into a larger project, or are you working on a "book" from the very beginning?
Writing starts small, a few words at a time. “Accretion” is the best word I can think of for how I write. And things form into pieces, yes, before they form into wholes. My ideas for things to write, though, are big, seemingly complete, sometimes book-sized ideas.

5 - Are public readings part of or counter to your creative process? Are you the sort of writer who enjoys doing readings?
I enjoy doing readings quite a lot, but they’re odd things. They depend on so much. Wind direction, aura comingling, what shoes you and the people in the room all wear that day, the mood that the room and the people end up making. I’m used to performing, and I like the challenge of grabbing a person’s attention, but reading is its own creative process, and for me it’s a different thing than writing.

6 - Do you have any theoretical concerns behind your writing? What kinds of questions are you trying to answer with your work? What do you even think the current questions are?
I think I’m always writing about how we’re still at the very beginning of understanding the move on this continent from colonial theft to nation-state, and how it might yet unmake us all. And how that act of theft reproduces in everything the non-native inhabitant does, and how little we really know, and want to know, about ourselves and our transplanted home. And how we’re too slow and the earth moves much quicker.

7 – What do you see the current role of the writer being in larger culture? Does s/he even have one? What do you think the role of the writer should be?
I have no clue. I think you could listen to Eleanor Wachtel’s interviews on the CBC or read them in Brick magazine and get a sense of what the writer’s role in the culture might be. So many interviews with writers end up framing the writer as an expert in the subjects her books cover, so that might teach us something about what people want from writers or think writers are good for, but I don’t know if every writer can reliably be considered an expert on much of anything besides maybe writing. I find Wachtel to be one of the few who asks a writer about writing, who sticks to what her interviewee knows best, and the result is really gripping and thought-provoking and entertaining.

8 - Do you find the process of working with an outside editor difficult or essential (or both)?
Both, but I hope you mean difficult in a good way. Harold Rhenisch, who was my editor for Rove, was the king of the wild suggestion, and I tried all of them. I very rarely said No. Saying Yes to his wild suggestions brought the book into its own, whether or not we ended up using everything he suggested.

9 - What is the best piece of advice you've heard (not necessarily given to you directly)?
“Just ignore them and they’ll go away.” —Mom

10 - How easy has it been for you to move between genres (poetry to critical prose)? What do you see as the appeal?
I find it relatively easy to make that shift. You’re using different parts of yourself for each, and I find it nice to give one a break and use another for a while. It ends up helping both.

11 - What kind of writing routine do you tend to keep, or do you even have one? How does a typical day (for you) begin?
I’ve tried and tried, but I can’t do a routine, or rather I can’t keep to one indefinitely. I eventually, inevitably revolt. So I aim to do some sort of writing every day, or nearly every day—that’s the extent of my routine. Sometimes I work for hours and hours and hours, and sometimes I just mince and read and jot words down. The “Sit your ass at your desk and write” school of thought or the “You will write X number of words every day, goddamn you” school is my recipe for a most perfect failure.

12 - When your writing gets stalled, where do you turn or return for (for lack of a better word) inspiration?
I go outside, go for a walk, get the body moving. I read or play the accordion or paint something. I tend to plants or wash the dishes. I sit/fret/lament.

14 - David W. McFadden once said that books come from books, but are there any other forms that influence your work, whether nature, music, science or visual art?
Yes. Not anything as a rule (besides books, actually). Nature, probably most of all. Photographs, the sounds of people’s voices, archives.

15 - What other writers or writings are important for your work, or simply your life outside of your work?
I had a few talisfolk while Rove was coming together: Andrew Suknaski’s Wood Mountain Poems, Fred Wah’s Diamond Grill, Jan Zwicky’s Robinson’s Crossing, Dennis Lee’s Civil Elegies. Myrna Kostash is big for me. Dionne Brand, Tim Lilburn. I’m awfully Canadian in my tastes in terms of writers that are important to my work.

16 - What would you like to do that you haven't yet done?
a) Start a literary journal. b) Publish a second book. c) Travel down the west coast, BC to California.

17 - If you could pick any other occupation to attempt, what would it be? Or, alternately, what do you think you would have ended up doing had you not been a writer?
Dream jobs: arborist, session drummer, market gardener. Had I not gotten into writing I would have no doubt occupied myself with some other means of creative expression. I’ve never been without that in all my life.

19 - What was the last great book you read?
Two great books I read/re-read recently: James Baldwin’s Nobody Knows My Name and Stephen Reid’s A Crowbar in the Buddhist Garden. Both books of essays. Both astounding at numerous points. Carolyn Smart read in London a little while ago and I’ve just started her book Hooked and I quite like what she’s doing in it, the voice(s) in it.

20 - What are you currently working on?
A thing based on the Northwest Resistance. I have no idea where it’s going right now, but it’s poetry. I’m also working on a shorter thing about being edge-of-life broke—also poetry. I’ve got a short story and a few essays I’m trying to make exist. I’ve got a novel that I keep chipping away at. There’s plenty.