In any other dungeon, I’d try
pirate and native, landlord and tenant,

anything but this—
master and servant’s too Depeche Mode.

That’s easy, the eighties’ garishness.
Let’s be Gorean instead,

in your sword-grown sovereignty.
I’ll carry the homestone, polish the filigree.

I enjoy my womanly things.
In the glebe where I sow the land

I’ll harvest your name from the wind.
I accept these parameters.

You’ve kept me famished for weeks. (Angelo Nikolopoulos, “OBSCENELY YOURS”) 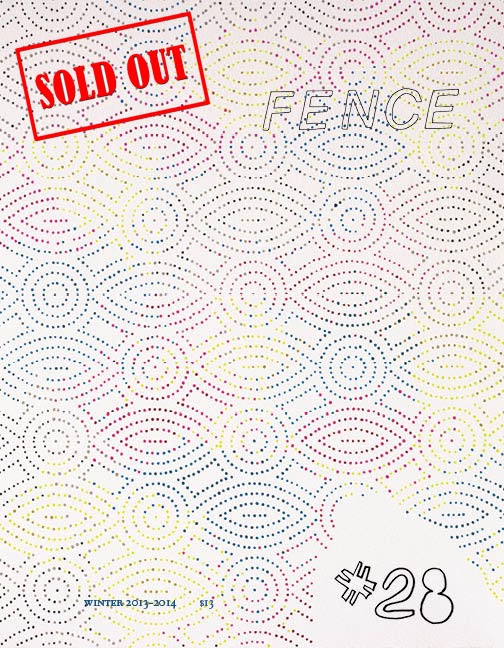 Recently, FENCE #28 (winter 2013-14) appeared in my mailbox from just south of the border. One of my favourite American literary journals (and, increasingly, American literary publishers), I’ve found something interesting in pretty much every issue of the biannual FENCE I’ve seen over the past half-decade or so (someday I’ll manage to even get my hands on some back issues). Edited by American poet Rebecca Wolff, as well as an extensive editorial team, this issue also includes Rick Moody as a guest-fiction editor, selecting a small section of short fiction, and even a short “staff fiction” section, which is pretty engaging. Given their editorial mandate of not considering the work of those published in each issue for two following years, I like very much that the journal is forced to be more open, publishing work by a number of writers I’ve not yet had the pleasure of being aware of. This issue, for example, includes new works by Cement Pond, L.L.C., Betsy Andrews, Amanda Goldblatt, Broc Russell, Matt Reeck, Melissa Broder, Kent Leatham, Zachary Lazar and Carol LaHines. Of the work in the new issue, it’s hard not to be immediate struck and charmed by Dorothy Albertini’s short “FOR WORMS” (in the “staff fiction” section), a piece that could easily work as a prose-poem as well. Her story opens:

Found at the train tracks. A worm of indescribable length. We had a feeling he would be lost if we took him with us, so we left him there, though it was the train tracks, which seemed dangerous. At least loud. But what were we to do? We have learned so many lessons about disruption. We were sure that this, for once, was the only thing, the right thing, the good thing, to do.

Another highlight of the issue is Raphael Rubinstein’s “THIRTEEN WAYS OF LOOKING AT A BLACKBOARD.” An obvious nod (for those few who might not know) to the Wallace Stevens poem, there have been dozens, if not hundreds of poems composed since that play with the idea (including Stephanie Bolster, and even Robert Kroetsch, who wrote of a lemon), there is something about the Rubenstein poem that manages to make the idea fresh, despite the onslaught of similar pieces. Rubinstein’s poem includes:

III
A letter erased, purloined,
but insistently legible;
the “monosyllabic word meaning esse,”
which I (don’t) write here
on my very own lackboard.

V
I do not know which to prefer,
the beauty of transgression
or the beauty of quietude,
the screech of chalk writing
or just after.

One thing I’ve noticed over the years is how the “other” section (after sections “poems” and “fiction”) have been entirely that, running the gamut from straight essays to interviews to features from conferences and almost anything else you can pretty much think of. One of the first issues I read included a magnificent interview with American poet Alice Notley, and it open the presumption that the journal would feature equivalently meaty interviews in every issue (which it doesn’t). Despite the quality and breadth of the work each issue I’ve seen includes, is it wrong for me to be even slightly disappointed?

“YOU CANNOT LIGHT A GHOST ON FIRE”

Eliot the burning house
addresses ash, snorts its
recrudescence: two boughs
collapse in, ignite “the trunk”
his fire / pal fire / not my
fire. on my eyes the irony
of sweat—in the dream
i have i walk seven me’s
through him. at his heart
there is a choice: burn
now or forever eventually.
i give in two to those dooms
and one to the third of sub
text. two to his eyes, one
mouth, one nose. for an
hour i sell myself to him
i watch films of myself
dying—i hope one day
his god will talk to me
through him, his fire
his hungry mouth, each doe
i feed like a holy sponge.
he will say: wake up, and
finally i will not. (Lou Lamanna)