I saw many many clocks, the clockman said of his first day. As the butcher cuts meat, the architect hides the sun; hesitancy blooms urge. Tonight, there is a horse in the painting above your bed. Tonight, a mole on the back of your love’s hand. At day’s end, the grocer pulls shutters across the glass complicating the thief’s anonymity. 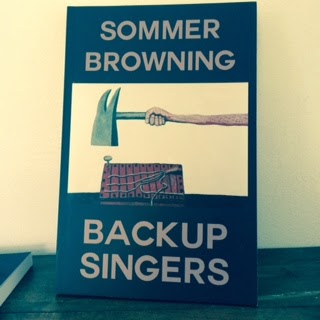 There is an enormous amount of joy that comes with the announcement of a new work by Denver, Colorado poet and illustrator Sommer Browning, and the recent AWP in Seattle saw the release of Browning’s second trade poetry collection, Backup Singers (Birds, LLC, 2014). Given the amount of her quirky and hilarious comics were utilized as part of her first poetry collection, Either Way I’m Celebrating (Birds, LLC, 2011) [see my review of such here], I must say that a book by Sommer Browning without comics is unexpected (and even slightly disappointing). Still, there aren’t many contemporary poets with her penchant for tight lines and terrible jokes (Montreal poet David McGimpsey is a rare exception), and the results are absolutely stunning. Constructed in four sections, the first two sections are striking for the fact that they each contain groupings of single-page, untitled prose lyrics, collected in such a way that they could be read singularly, or as a narrative of accumulation, each poem acting and reacting against the ones that sit prior. One could say that her individual poems are also built accumulatively, each phrase and line pushing and piled, allowing for the oddest connections to exist in the reader’s imaginations. The rush of her prose also makes one wonder just how these poems might be heard, most likely as striking as how they appear.


Goodbye fast-forward, goodbye alphabetical order, so long curlicue of the g’s tail looping on and on into each o and so on, icy line prismed into meaning: Varda on the absolute voyeurism of a door or the way the last drop releases the bottle into peaceful vacancy. Cassette tape roadkilled the DOT. On and on until the bun in the oven explodes golden over the Thanksgiving table, on and on stormy celluloid, on Donner and Blitzen, ontologically beautiful portmanteau Juneteenth, this most personal ecstasy drawing a monster from mythology.

There is a joyful, lively energy to her poems, one that can’t be diminished even through poems that might appear cranky, discordant or just damned odd; instead of wading through the dark, even her poems that work through some darker subject matter or references are radiant with energy (with some poems that rush at a near-manic level of urgency), one that is utterly intoxicating and impossible not to get caught up in. As one poem opens: “I told you he spanked me before work, how weird it was, how nearly non-sexy. Where did you go when I went to work?”

How long does it take to get to a funeral? The windshield wipers crazy across the window, out of pace so one runs over the other until the other careens so far to the left it hooks itself onto the edge of the car, the pathetic machine-sound of it straining to do its job. We pull into the Walgreens’ parking lot to search for tools. Since my first car needed pliers to open the window, I’ve always kept tools in the car. The bandage over the cure. Before this, we were received at an Irish pub by Sarah and her family and friends to celebrate the death of Sarah’s mother. Is celebrate the right word? I convince you to drive us back to New York so I could take another pill at the funeral. In the language of death, I want to say thank you.

Sommer Browning is one of a small number of contemporary American poets composing tight, observational lyrics on how to live in the world, all of whom utilize subversion, distraction, discomfort comfort and use of the straight phrase, and a blending of lightness against such very heavy dark subject matter. And when I suggest a list of such poets, I would include: Emily Pettit, Bianca Stone, Hailey Higdon, Hillary Gravendyk and Emily Kendal Frey. Browning uses terrible jokes more than most (far more subtle here than in her previous collection), but often as a distraction against more serious topics. In my mind, these are a grouping of poets who manage to say an enormous amount through allusion to far darker things; and when they do speak of such plainly, it can catch a reader off-guard, and nearly be missed.

There is a reason
division is an operation.

A reason I know
the math behind the body.

It’s a girl
and the wires she needs

open her hands
before they’re fists.

The third section of Backup Singers is made up of the forty-one part sequence “Multifarious Array,” a space in which she’s able to stretch out and display her talent for composing, point by point by point, across a wide canvas. Part of what appeals about Browning’s writing (and comics) is in the way her unusual perspective and humour allows her incredible insight and observations, as “Multifarious Array” opens with: “A broken Xerox machine dominates the corner. It doesn’t reproduce mistakes, doesn’t allow gradual fade, it’s broken because it forces vividness.” The sequence even allows a perspective into Browning’s own work, existing as an extended lyric essay on the work of an unnamed poet, as Browning writes:

Her poems live between intimacy and devastation. After I read them, I marvel that within each, a feeling welled and filled me, then receded.

Conjured at a different angle, the worn memory becomes the missing piece.