A row of little ovens waits on the cliff.
I can’t wait to get inside.
Mother me, dry heat.
Bake me into a baby. (Emily Kendal Frey) 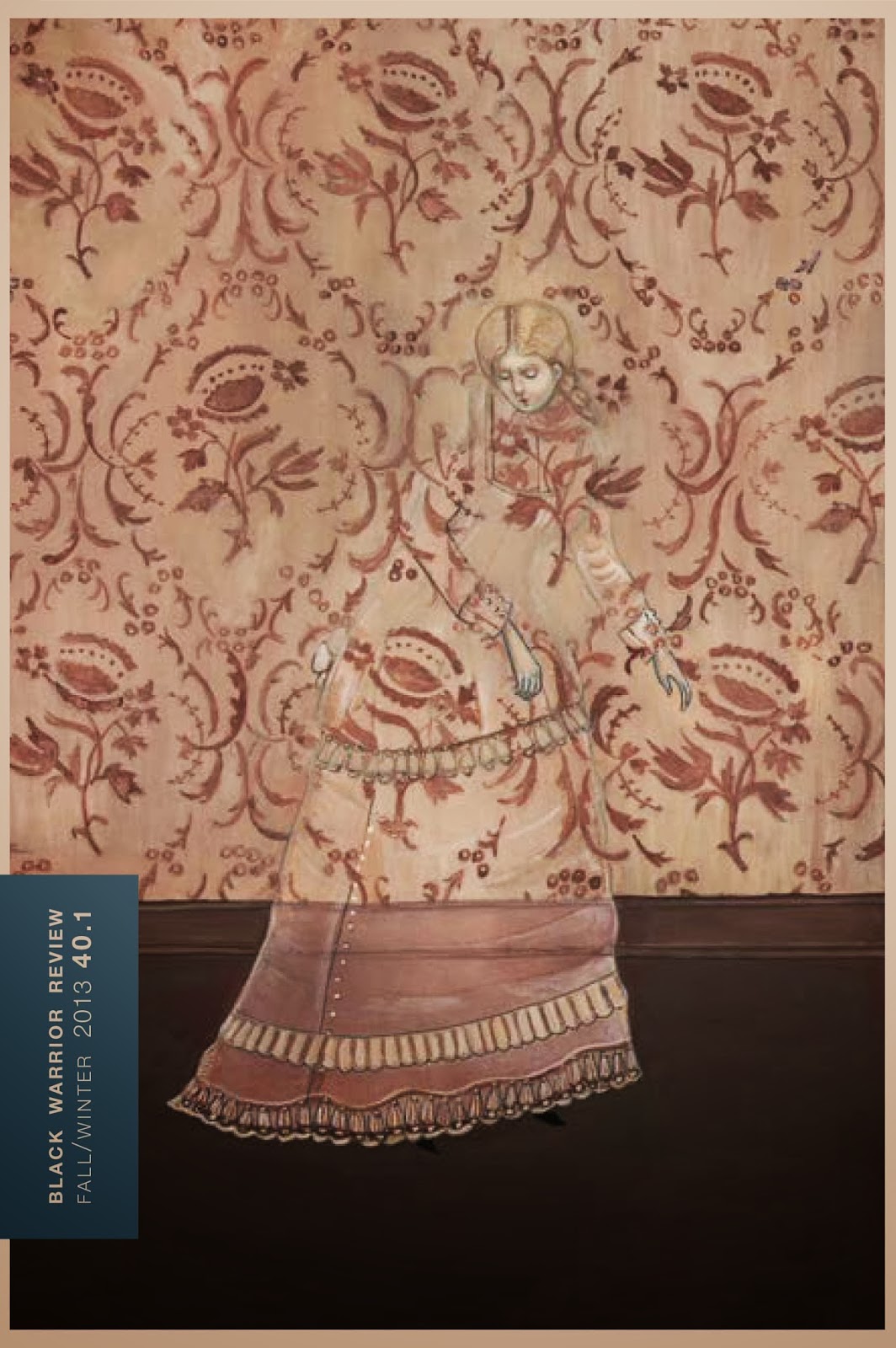 While in Florida, we wandered through the occasional bookstore, and I managed to pick up a copy of the most recent issue of Black Warrior Review (fall/winter 2013; 40.1). There are so many American journals I’ve only heard of, and haven’t managed to yet see, a constant frustration of the international border between us One thing I didn’t know about the journal, as the colophon reads: “Black Warrior Review is named after the river that borders the campus of The University of Alabama in Tuscaloosa. The city, river, and journal derive their names from the sixteenth-century Indian chief Tuscaloosa, whose name comes from two words of Creek or Choctaw origin—tusca (warrior) and lusa (black).” I’m struck by a number of the selections in this issue—writing from such familiar names as Emily Kendal Frey, Bianca Stone and Julia Cohen—as well as some names I hadn’t previously been familiar with, including Wendy Xu, John Zackel or Adam Atkinson, for his “jacket copy” series, three of which are included in the issue. Atkinson’s three pieces are strange, and strangely compelling and entertaining, even if every element in each poem might not work. They’re certainly worth the trip, and certainly intrigue; I wonder how far he’s planning on taking this suite of unusual poems?


Jacket Copy for The Cop Followed Frank Into the Diner

The definite article in this book’s title is to be eyed suspiciously. This poet highlights many and any cops, Franks, diners, and followings into. For instance: “The cop frankly dined on / the fellow.” Or: “It follows that Frank copped a feel.” Or: “Diner: 3 A.M. / Cops from the vice squad / with weary sadistic eyes / spotting fairies.” At times, it plays like bathroom humor, if the bathroom was at Stonewall Inn and stuffed full with lubricated bodies: “The cop’s forearm followed his fist / into Frank’s asshole. A fist appeared through a portal twenty years from now and nailed / a cop in the kisser.”

What really struck in the issue included some of the prose, far more lyric than what I’ve encountered in most literary journals these days, from John Zackel’s short story, “The Potential Energy of Mr. English,” to Ben Roberts’ “Snapshots from the Wedding,” which includes:

There were those who arrived in the early morning hours before the Wedding. Others had waited in that place some thirty and three years. Here is the appointed hour: three in the Post Meridian. No one who came even a minute after was admitted. The Wedding waited on no one but the Bride and the Groom. For it is written, ‘No one shall arrive late to the Wedding.’ It is as if you had not come at all.

Given how particular I am about prose these days, I’m intrigued in the flavour of the prose in the pages of this journal, most of which is far more interesting stylistically than most of the far-too-straight examples of prose I see in literary journals. A further highlight was Julia Cohen’s “I Cannot Name It, It Lives,” listed under non-fiction. Cohen’s piece begins:

You are the splintered cloud of wood. Hum of halogen, a stutter strikes your microcosm’s sharp connector thorn. Home & the uncut call?

The density of a word, its cellular level I poke intricately awake. Indigenous to repetition. A girl drains an object. Your full sink & floating asparagus tips.

Object painted with asthma attacks. Object between relationships. Frozen object taken out of the freezer.