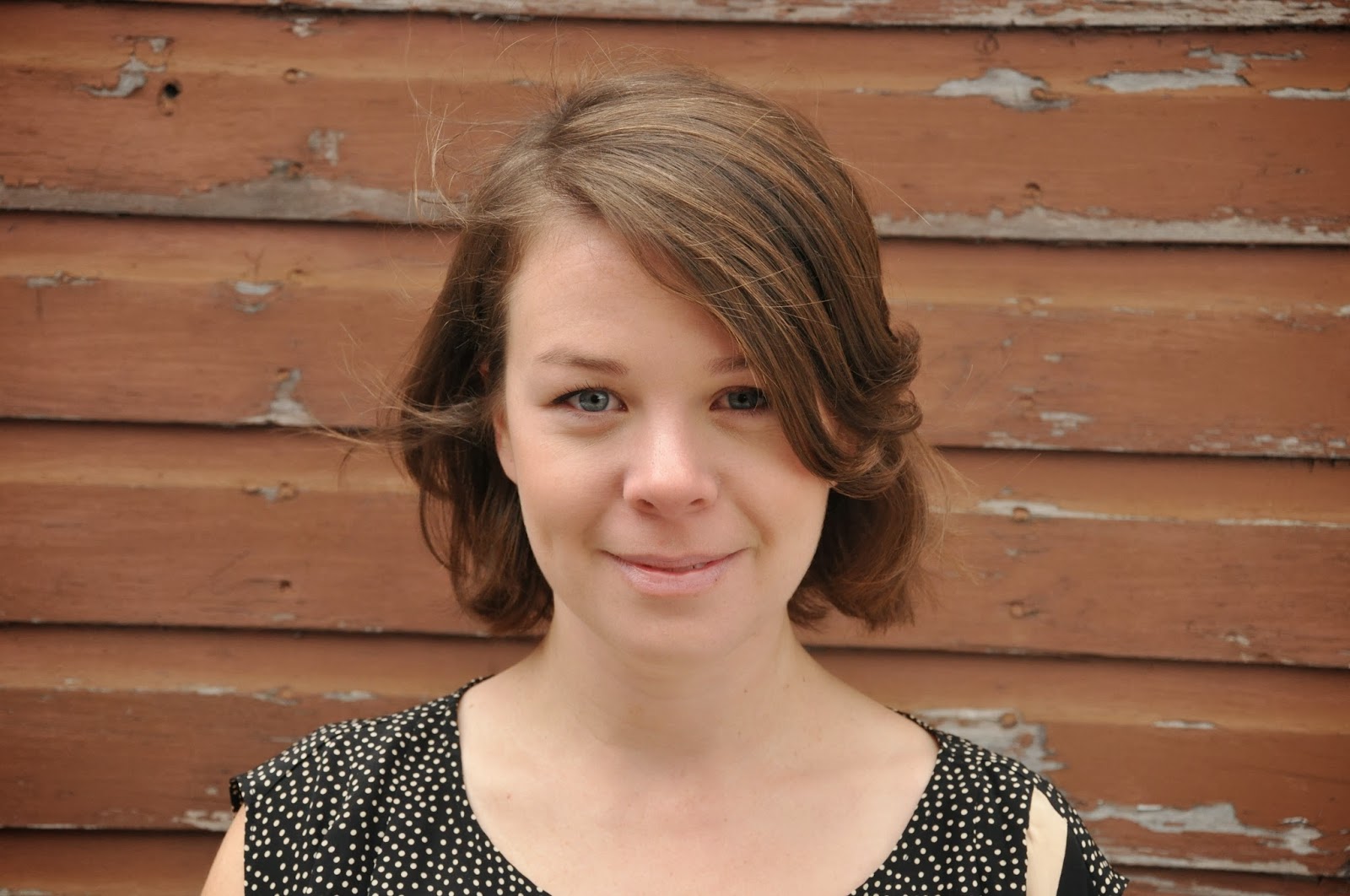 Suzannah Showler's writing has appeared places, including The Walrus, Maisonneuve, Hazlitt, and Joyland. She was a finalist for the 2013 RBC Bronwen Wallace Award for Emerging Writers and winner of the 2012 Matrix LitPOP Award for poetry. Her first book, Failure to Thrive, is forthcoming from ECW Press April 2014.

1 - How did your first book or chapbook change your life? How does your most recent work compare to your previous? How does it feel different?
I don’t know yet how or if my book will change anything, but I’m very glad it’s coming out. I’m only just-just starting to write new work again, so I don’t know what it will be or if it will be different. I hope it’s better.

2 - How did you come to poetry first, as opposed to, say, fiction or non-fiction?
I came to poetry first when I was in kindergarten. I wrote a poem in the voice of Harriet Tubman that took the idea of being a “runaway” slave very literally and put her in an actual foot race. (I have been an earnest dork since infancy.) I remember feeling sure that it was a poem, even though it didn’t rhyme. But I don’t know why I did that instead of something else.

I would love to write fiction and non-fiction, and I do try, but I’m like a wannabe triple-threat flailing spiritedly and arrhythmically through the dancing portion and too scared to sing past the first three notes of any song.

3 - How long does it take to start any particular writing project? Does your writing initially come quickly, or is it a slow process? Do first drafts appear looking close to their final shape, or does your work come out of copious notes?
I kind of feel like describing writing process is like describing your dreams: you can never quite get at what you’re trying to convey, plus it’s super boring for anyone who it didn’t happen to. But yeah, I’m really slow, and my drafts come out as both copious notes and something close to a final draft all in one drawn out stew-mess of a document. It’s chaos. In an ugly way.

4 - Where does a poem usually begin for you? Are you an author of short pieces that end up combining into a larger project, or are you working on a "book" from the very beginning?
I am definitely not working on a book from any kind of beginning. Just cobbling a lot of small things, and slowly.

5 - Are public readings part of or counter to your creative process? Are you the sort of writer who enjoys doing readings?
Readings are not really part of my process. By the time I read a poem aloud, I’m not working on it anymore. But I’ve learned to like readings, in my way. There’s a healthy dose of dread, and then once I’m up there I get a charge out of it. Especially if I end up making people laugh, and that’s often really easy do to because people are very desperate to laugh at poetry readings.

6 - Do you have any theoretical concerns behind your writing? What kinds of questions are you trying to answer with your work? What do you even think the current questions are?
I am extremely theoretically concerned when writing, but I’m not trying to answer any questions. I write so I can hang out with questions I find impossible to answer. I don’t think I can make claims about what’s current; I only know what I’m haunted by.

7 – What do you see the current role of the writer being in larger culture? Does s/he even have one? What do you think the role of the writer should be?
I think the role of writers should be to do things with words in such a way so as to attempt to convey something (“something” can be interpreted loosely). I don’t know what this means for culture.

8 - Do you find the process of working with an outside editor difficult or essential (or both)?
Essential.

9 - What is the best piece of advice you've heard (not necessarily given to you directly)?
About writing, the best advice I’ve ever gotten was “be fearless.” I’m pretty sure I’ve never lived up to it, but it’s something to try for.

10 - How easy has it been for you to move between genres (poetry to prose)? What do you see as the appeal?
This is my terrible confession: for the most part, I really only like reading poetry insofar as it fuels my poetry-writing habit. My taste keens towards poems I wish I had written, or ones that make me want to write better. This is a disgusting way to read and appreciate other people’s work, and I am a horrible monster.

So the appeal of writing prose for me is that as a reader, I love it in a less murky, self-involved way, and it would be nice to write the sort of thing that I might enjoy regardless of what I was doing with my life. Unfortunately, I’m a paralyzed and mediocre fiction writer. I find switching into non-fiction really fun and easy, actually, but I’m not sure how good I actually am at it (see: ‘Spirited, arrhythmic flailing,’ Question #2).

11 - What kind of writing routine do you tend to keep, or do you even have one? How does a typical day (for you) begin?
I go to sleep at night thinking about breakfast. I love breakfast so much. And coffee.

All this to say: only so much of the day is a morning, and then it’s just the rest of it. I try to write whenever I think I might be able to trick myself into doing it.

12 - When your writing gets stalled, where do you turn or return for (for lack of a better word) inspiration?
My writing is always stalled. Stalled is just what writing is for me.

If time and money permits, a train trip alone is a good way to get me going. Or anything a bit disinhibiting. Like, two glasses of wine and half-hypnotizing myself by playing songs I’ve listened to so many times I can’t really hear them anymore.

13 - What fragrance reminds you of home?
I’m from Ottawa: a city renowned for its affectless air.

14 - David W. McFadden once said that books come from books, but are there any other forms that influence your work, whether nature, music, science or visual art?
I’m influenced by anything I can manage to get my head around. I find most of it on Wikipedia.

15 - What other writers or writings are important for your work, or simply your life outside of your work?
Andrew Battershill is a writer with whom I share a pair of sweatpants. This arrangement has a profound impact on my daily life.

16 - What would you like to do that you haven't yet done?
Take the train from Europe to Asia. Also go to Iceland. Also road trip in the American South. Also some writing things I can’t talk about here because I am too superstitious.

17 - If you could pick any other occupation to attempt, what would it be? Or, alternately, what do you think you would have ended up doing had you not been a writer?
This is my favourite question to ask people at parties! People have these whole other selves they keep in their back pockets (along with regret and nostalgia and lint).

My dream job: street photographer circa 1954-1976. In this century, too, I would have liked to have done some kind of visual art, if it hadn’t been writing. I draw at about the level of a half-talented sixteen year old (because that’s what I was, but then I got older and not any better.) I didn’t learn to print photos in the darkroom until I was in my 20s, but I love it more than just about anything else. (It is magical.)

18 - What made you write, as opposed to doing something else?
To be real, I was never going to do anything else. I was an early and singularly hungry reader, and I started wanting to write books pretty much as soon as I started reading them.

The more interesting question, in my case, might be how this was actually allowed to happen. And the answer is: because my parents are crazy and permissive and the best. They never, ever told me to not do this, or even so much as hinted that it wasn’t a practical choice. And my parents aren’t artists; they’re professionals. Think about the crazy act of imagination it takes to be a tax prof and a refugee lawyer and to look at your kid and say: sure, poetry, that sounds great! I think that takes more imagination than actually being a poet.